Matthew, Andrew and Paul Caruana Galizia have written to the Council of Europe’s monitoring committee that is following Malta after the Parliamentary Resolution from last year to urge them not to drop their guard just because the Labour Party changed the prime minister.

Daphne’s sons reminded the committee that “Malta has so far largely ignored the extensive recommendations of the Venice Commission, GRECO, and MoneyVal and has implemented only one of several recommendations by the Parliamentary Assembly of the Council of Europe’s Special Rapporteur on Daphne Caruana Galizia’s assassination: the public inquiry into her death, which in its first month of operation has already made a significant contribution to the truth.”

“Malta,” the Caruana Galizias said, “should not be allowed to stop here.”

Daphne’s sons recommended to the committee to ask Prime Minister Robert Abela “to commit to a clear timeline to implement the recommendations of the Council of Europe’s specialised bodies and Parliamentary Assembly in their entirety. Adherence to this timeline should be closely monitored by the Committee.”

The letter in full is shown here: 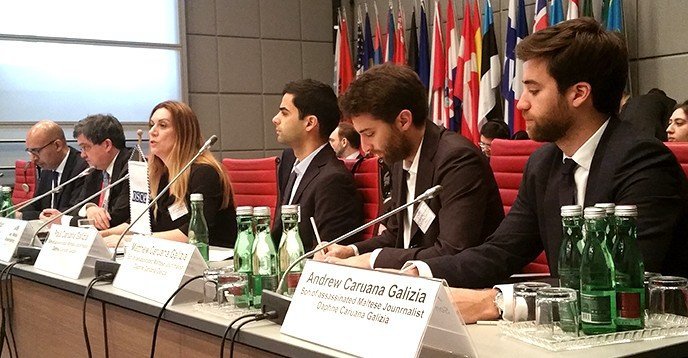 Tomorrow you will convene in Paris for an exchange of views on whether Malta is honouring its obligations and commitments to the Council of Europe and on that basis decide whether to subject the Maltese government to a full monitoring procedure.

Meanwhile, as a direct outcome of evidence that has emerged implicating the former prime minister Joseph Muscat’s chief of staff in our mother’s assassination, Malta’s ruling Labour Party has elected a new leader — the candidate, Robert Abela, who promised continuity — has now replaced Muscat as prime minister. The risk is that a change of leadership will lift pressure for the government to pursue any of the other pressing changes that the country needs and which the Venice Commission, GRECO, MoneyVal, and the Parliamentary Assembly of the Council of Europe have recommended.

It was clear on 16 October 2017 and it has grown clearer since that our mother’s assassination was ultimately caused by the failure of the country’s weak democratic checks and balances. These allow Malta’s prime minister unfettered powers of appointment of judges, magistrates, the police commissioner, the head of the secret service, the heads of all government departments and agencies, and the unrestricted ability to co-opt parliament by employing its part-time members in government service. Our mother’s assassination is only the most egregious example of how vulnerable this system is — that is, based entirely on unchecked trust — when the individuals elected to public office are themselves complicit in criminal activity.

All independent assessments, by bodies of the Council of Europe and the European Union, have so far come to the same conclusions and have offered recommendations to support Malta on its path towards functioning democracy, built on the rule of law. None of these recommendations have been taken up by the outgoing government and none have been referred to by Prime Minister Robert Abela, save for saying that “we have to pick and choose which of the Venice Commission’s proposals to implement” and that he will implement two of them.

The former prime minister’s chief of staff, Keith Schembri, to whom power was delegated to decide the fate of a series of police commissioners, the career prospects of members of the judiciary and the licensing of banks, is now under investigation for complicity in our mother’s murder, as well as attempts to protect his suspected accomplices from justice. The only check he faced in his destructive career in public office was our mother’s reporting, and it is only the exposure of his suspected role in her assassination that has brought a measure of accountability in the form of his resignation from public office.

In a country with effective institutions and true separation of powers, it should not take the murder of its most prominent journalist for a government official to be held to account. And yet in Malta that is exactly what it took: our mother’s life, and for only partial accountability.

To accept this situation and move on would condemn Malta to a deeply flawed political future which rewards crime conducted through politics and punishes dissent with harassment, ostracism and targeted car bombs. It would also condemn Europe to co-existence with an unaccountable government that trades on Malta’s sovereignty and EU membership, selling citizenship, visas, banking services, online gaming, and cryptocurrency exchange licences to a vast and global rogues’ gallery. This presents a clear threat to the financial stability and security of Malta’s partners in Europe, and has helped foment corruption and repression in countries as far apart as Azerbaijan, Libya, and Venezuela.

Just as Joseph Muscat returned from a Christmas trip to the Church of the Nativity in Bethlehem, the Organised Crime and Corruption Reporting Project named him 2019 Person of the Year in Organised Crime and Corruption. For the leader of one of the world’s smallest countries to achieve such global notoriety is only possible for two reasons: the absence of effective institutional safeguards and the systemic nature of the threat that high-level corruption in Malta presents to the global economy and international security.

Malta has so far largely ignored the extensive recommendations of the Venice Commission, GRECO, and MoneyVal and has implemented only one of several recommendations by the Parliamentary Assembly of the Council of Europe’s Special Rapporteur on our mother’s assassination: the public inquiry into her death, which in its first month of operation has already made a significant contribution to the truth. Malta should not be allowed to stop here.

The new prime minister, who has yet to commit to reform or to even acknowledge the depth of the country’s institutional crisis, should be requested to commit to a clear timeline to implement the recommendations of the Council of Europe’s specialised bodies and Parliamentary Assembly in their entirety. Adherence to this timeline should be closely monitored by the Committee. Anything less will see Malta’s obligations to the Council of Europe betrayed in favour of honouring obligations to the criminal system Malta’s former prime minister cultivated and protected.

We are prepared to provide testimony to the Committee should this be requested.