Frans Timmermans mocked for having posed with Joseph Muscat. “Who next? Kim Jong Un?” 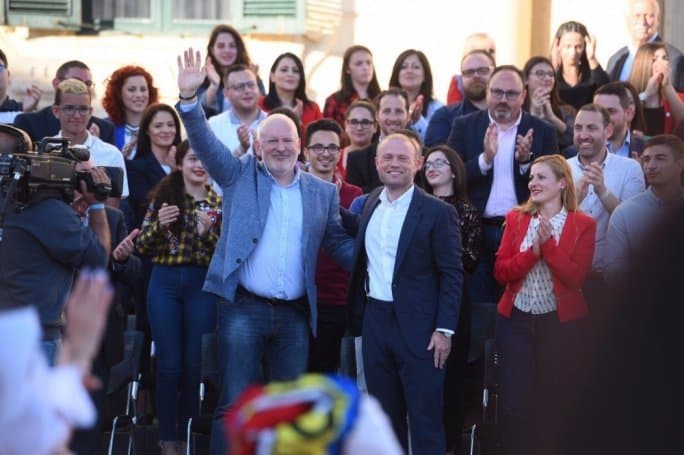 European politicians are starting to have to regret having been seen with Joseph Muscat. European Commission Vice President Frans Timmermans has faced criticism in his native Netherlands for standing by Joseph Muscat during his last months as Maltese premier even as he was covering up the assassination of Daphne Caruana Galizia and of the corruption in his office the murder attempted to hide.

Dutch satirical newspaper De Dageliksje Standard mocked France Timmermans for his “nice talk all day about a better world.” Instead, the newspaper says Timmermans “is not much more than a manager in an international game in which not all players are equally clean.”

The newspaper shows images of Frans Timmermans campaigning alongside Joseph Muscat. “Less than a week ago,” the newspaper goes on, “Maltese Prime Minister Joseph Muscat received a special honour. He became person of the year. And not because of his great leadership qualities or the necessary reforms that he implemented for Malta. No, Muscat received the prize from the Organized Crime and Corruption Reporting Project because of the huge corruption and crime Muscat has poured out over Malta.”

“What do we see here , on images from last May?” asks rhetorically De Dagelisksje Standard. “That is Frans Timmermans who praises Joseph Muscat and hugs him as if he was his favorite uncle, and not a man who let his chief of staff make millions in grubby tax havens and then let the whistleblower blow up in her own car. The man who flew to Dubai last week for a vacation he cannot afford at all with his legal income.”

Because of his association with Joseph Muscat, the Dutch newspaper finds “EU bobo Frans Timmermans is therefore a delicious hypocritical Hanswurst. Who will he embrace later? The Venezuelan President Maduro? Maybe Kim Jong Un, then? We’re going to wait. However, there is no longer one thing that Brussels finger waster Frans expects from us, and that is that we would continue to listen to him as if he were an authoritative moral compass.”

Previous:Plane with Joseph Muscat on board refused overflight by Switzerland
Next:THE SUNDAY TIMES: Political parties now have a choice