By someone known to me. 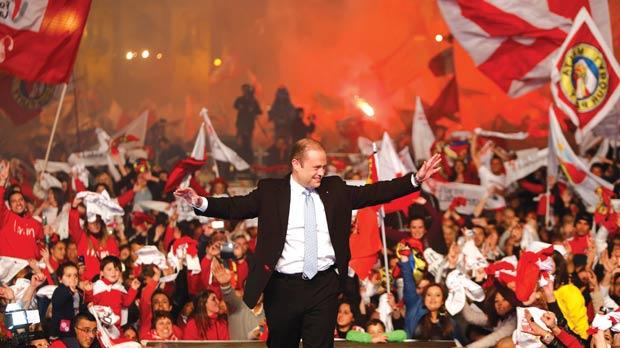 One consequence of climate change is the melting of ice that might have been frozen for countless years. This inevitably uncovers many things that had lain there undisturbed, shielded by the protecting ice, amongst which there are many skeletons. The dimensions of such revelations are much larger than that of the proverbial iceberg, of which only the tip is seen.

Climate change is the result of constant action and abuse to our environment, but it is sometimes accelerated by one or many cataclysmic events, that condense the expected timeframes into much shorter ones. That is what happened in the political climate in our country. The abuse was ongoing, and on a sharp incline, leading its masters to believe that they were unbeatable, ostentatiously flaunting this sense of invictus with an impunity that had never before seen an equal. It was this sense of impunity that created the climate for, and led, directly or indirectly, to the brutal assassination of Daphne Caruana Galizia. Her voice was very often alone. She was the beacon pointing light below the surface of the translucent ice, and into the darkest and shadowiest corners of Joseph Muscat’s artificially induced climate.

Her assassination was the cataclysmic event that broke the iceberg away from the continent, and the meltdown began in earnest. Every layer exposed, revealed skeletons, one after the other, and with each skeleton, a new echelon of Muscat’s loyal defenders began having doubts about what they had so adamantly refused to see, and defended so vigorously for months and years. Newspaper editors, journalists, politicians, and even  Ministers have now assumed various positions of disbelief – from the ‘illuminating epiphany leading to outright condemnation’, to an expression of doubt and uncertainty over what had previously been regarded as dogma – regarding the Muscats’ innocence and worthiness. Some, a notable example being ex-President Marie Louise Coleiro Preca, have even gone so far as to state that the filth that is being exposed (something akin to the Mafia infiltration into government that Camilleri’s Montalbano had dubbed as the ‘The Pyramid of Mud), should not tarnish Joseph Muscat’s reputation “…because he did a lot of good, including great steps in civil rights.” That is tantamount to saying that a hold-up artist, who robs a bank and shoots the bank manager, should not be considered a bad person simply because on his way out after the robbery, he gave some small change to the homeless man sitting on the pavement.  No, Madame ML(C)P, any good things that happened in the Muscats’ term do not in any way mitigate, let alone cancel, all this brown stuff oozing out from beneath the melting ice.

I find it pathetic to repeatedly hear the ‘bleat’ of feeling a sense of betrayal. I find it even more pathetic that none of them has yet found the cabbasisi (Montalbano) to come out unequivocally stating that they were betrayed by Joseph Muscat himself, but limit themselves to vague utterances that shroud it beneath many layers of meaning. This weak excuse (of having been betrayed) for their past behaviour is nothing more than a new version of the ‘Salome’s Dance of the Seven Veils’ with truth, which they had dabbled in when the then ‘only allegations’  were flying fast and thick towards the revolving blades of the proverbial fan. Just like Salome’s dance, their behaviour was the precursor of an execution, and no amount of bleating and whimpering, or obscure Facebook posts, can drown out the roar of their conscience, which I hope they still have.

No, I was not betrayed by Joseph Muscat, by his wife, by Keith Schembri, by Konrad Mizzi, or by the endless list of active or passive players in the game of death that they played. The dictionary definition of betrayal is defined as ‘the act of betraying someone or something or the fact of being betrayed: violation of a person’s trust or confidence, of a moral standard, etc’.  None of them ever had my trust or confidence, and I surely never expressed either trust or confidence through my vote. None of them have shown that they ever had a moral standard to speak of. So I fail to see how a betrayal can ever be used as an excuse. After all, veteran ministers and seasoned politicians mistaking the whiteness of the hard cold ice, hiding all those skeletons, for driven snow cannot simply be brushed away and painted over, just by saying ‘I/We feel betrayed’.  In the name of all that is decent, at least come out with it plainly and bluntly and say, “Joseph Muscat betrayed us”. Then, once that part of the air is cleared, maybe we could have a new, fresh, untainted and honest look at the ownership of Egrant. However deep that particular skeleton is buried, the ice will eventually cough it up as well…

Previous:LONG READ: The PN wants to catch them young
Next:The incentive to be corrupt