History of a protest suppressed 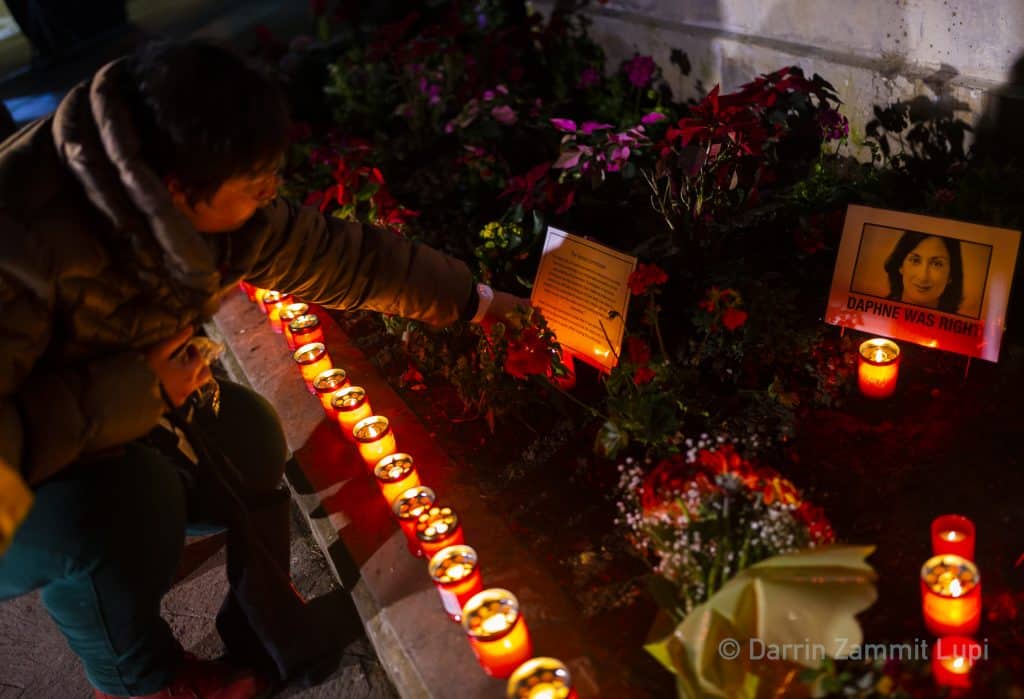 The protest site in front of the court building became, for over two years, the battleground for the struggle between basic decency and the claim for democratic life on the one hand and on the other, the fearful fury of the guilty who could not tolerate the continued protest mostly because they were unable to really do anything about it.

It does not take expert psychological skills to realise that if you’re confronted by a stubborn opponent the last think you want to do is keep pushing. When they swept the mementos and protest symbols left around the Great Siege Memorial (pictures, flowers, candles and so on) it was not just contempt for protesters that drove the government to keep coming back every night with their shovels. They did it more than 500 times wondering who was the real Sisyphus in the whole affair.

Any other contemptuous government would have let the protesters be, looked away, ignored them and waited for the poor, frustrated sods (as they would see us) to tire, get bored and find something else to do with their lives.

Removing everything every day gave people reason to come back every day and put candles and flowers and pictures and messages back again.  The suppression gave energy to the protest that was being suppressed. There’s hardly a better motivation for endurance than the drive of pure defiance.

So why did the government not stop?

It’s a bit like asking why vampires hurt at the sight of crucifixes. Guilt is irrational. And the sight of guilty behaviour – it was not just the censorship of the protest in Great Siege Square of course but that, for its grinding, daily repetition became hugely representative – told those of us who could see what was going on that we could not let up. If we stuck to our guns, or better if we stuck to our flowers and candles, truth will ultimately out.

The mistake of course is in thinking this is over. Joseph Muscat has made a strategic retreat sacrificing his power to order the protest suppressed in exchange for the ability to hide in his cave and stack his coins in neat columns.

Now, ironically, reaching our objective of truth and justice in the case of Daphne Caruana Galizia and in the cases of corruption and crime that she revealed has become a much harder objective to reach.

The crooks, the Panama gang are no longer vulnerable to pressure from European and global institutions, they are far less exposed to the scrutiny of the international press, they can dodge angry crowds and the odd wayward egg which happens to be gliding in their general direction.

The means protesters have to reach them, to put pressure on them, to force the truth out of them have shrunk now that they abandoned the battlefield and rushed behind their walls of secrecy built from the proceeds of their crimes while in office.

The work of protesters demanding justice must now intensify, not diffuse. It must make up for how these people pushed in front of them the face of a different prime minister. Protesters must see through the gestures and the words and the illusion of normality if they are to ensure that justice is served.

But it goes deeper than that.

In order to protect themselves, in order to excuse their transparently guilty behaviour, in their effort to silence protest through fear, intimidation and the overwhelming use of public resources, Joseph Muscat’s gang mobilised a support base of mindless hate.

Robert Abela may have decided it was tactically advantageous to stop the night time vandalism perpetrated by state-salaried public cleansing drones. So, no grovelling gratitude from us for the prime minister’s decision to stop employees whose salaries we pay from censoring us. Rather the expectation that he does his job while we do ours: the job of holding him to account.

But 3am raids by uniformed city cleaners is only a part of Joseph Muscat’s scheme of suppression. It’s actually the professionalisation and anonymisation of the violence which he mobilised against us.

The real army of intimidation is in the hecklers who spit on us as we lay flowers at the memorial. Those who call the women who kept the protest up for over two years whores in broad daylight in an open square. The people who did not hesitate to physically assault protesters, break their phones and slap them around.

The real army of intimidation is in the ‘B’ class politicians like Jason Micallef or Robert Musumeci or Tony Zarb or Jeffrey Pullicino Orlando or Ray Azzopardi or Josef Caruana who lampooned, attacked, slandered and vilified protesters and identified them for online lynching and physical abuse.

Robert Abela will need to rein in all this. It’s his job to protect our fundamental human right to protest. It’s his job to stop people who intimidate, abuse, threaten or worse because there is no right to use violence (verbal or physical or psychological) to serve any end, especially a political end. And it is a breach of our right to protest when that abuse comes from functionaries of the state.

Here’s Mario Azzopardi, state-funded party-propagandist for the Labour Party this morning. This is the guy Robert Abela needs to put a lid on now. A tall order considering that just a few weeks ago Robert Abela told Mario Azzopardi our flowers were “a provocation”.

Yes, they are. Our flowers want to provoke truth and justice for Daphne and for our country. And we’ll keep trying until it works. And Mario Azzopardi can fuck right off.