Memo to Robert Abela. One of many to come.

Robert Abela takes office at 3pm this afternoon. He is pleading for sympathy because he’s new to the job and wants to be given time to find his feet. And yet he pledges to be a prime minister of “continuity” meaning he was elected on the promise there would be no hiccups.

This morning, protesters found the protest site in Great Siege Square cleared again. If we find it cleared again tomorrow morning it will be under Robert Abela that this would have happened.

117 weeks and we are still here. Back to the renewal of the protest memorial every day. Continuing our calls for justice. For Daphne. And for us all #daphnecaruanagalizia @occupyjusticema @OwenBonnici pic.twitter.com/2hZorc6vIP

That was 15 September 2018. Though it is a human right that complaints about breaches of human rights are considered speedily we have not been handed down a decision by a first court yet. Therefore, no court has pronounced itself on our claim yet.

A decision is due on 30 January 2020. If that court finds that Owen Bonnici breached fundamental human rights by ordering the suppression of the protest, the decision would have significance for an appraisal of the undemocratic government of this country under Joseph Muscat.

This week Owen Bonnici may or may not be confirmed as minister for culture, justice and public cleansing. But if his actions up to this morning – repeated hundreds of times since 15 September 2018 – would find the condemnation of a court, he must carry the can. This is not some dispute with the government about some decision or other. This is about one of the most fundamental of fundamental human rights: the right to speak freely in a democracy.

Even if Owen Bonnici is given a different cabinet post this week, a court decision against him, having been so vociferous in taking credit for it, would be grounds for his immediate resignation. A change in the premiership does not absolve him.

But if tomorrow the memorial is cleared again under the governorship of Robert Abela, then Robert Abela will also be responsible for the breach of the fundamental right to freedom of expression.

I read someone’s reaction to Robert Abela’s commitment not to repeat the “mistakes” of the past. A ‘mistake’, the reaction went, is spooning salt in coffee instead of sugar. Deciding to censor a public protest calling for justice for Daphne Caruana Galizia is not a mistake. It is a conscious act of censorship worthy of a dictatorship.

Robert Abela would do well to halt this vile act of political vandalism and state-mandated censorship immediately. If he doesn’t, it will be as if he ordered it to happen in the first place. We will not take his imaginary newness to detract us.

While he’s at it he should have a discussion with whoever is responsible for the upkeep of Valletta. This is the sight in front of the Great Siege Memorial right now. 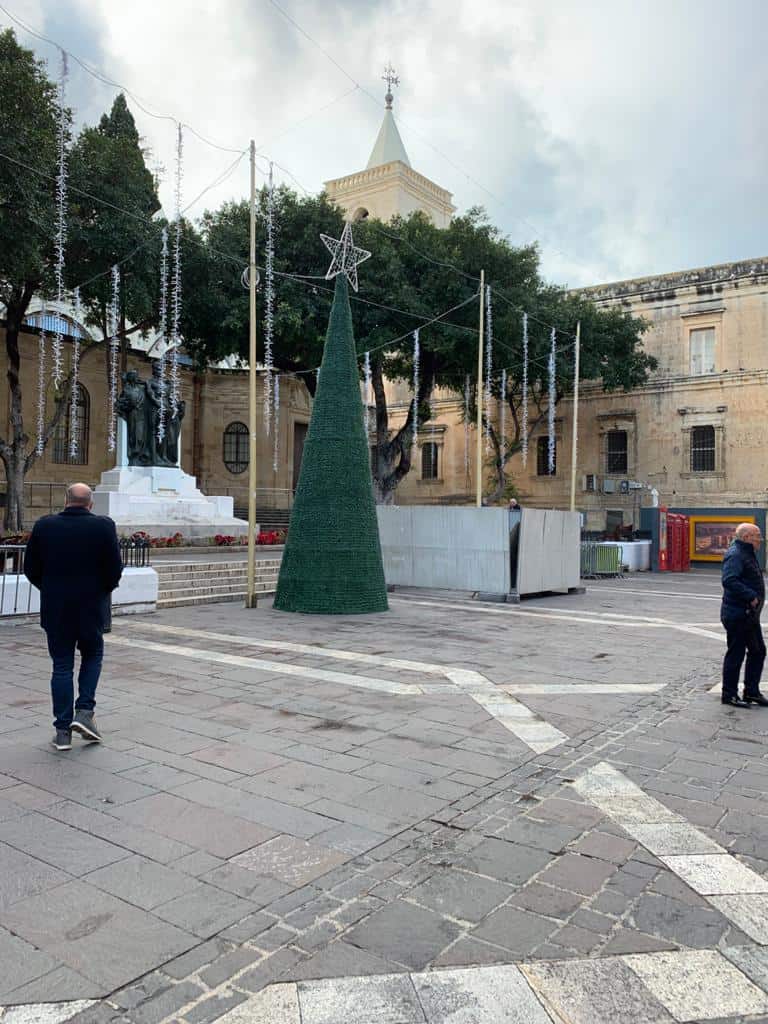 We’re almost past the middle of January and there’s still a big fuck off Christmas Tree bang in front of the Memorial. To complete the Memorial’s obscurity there’s a huge tin metal box that does not double for a crib. Apparently, it’s meant to ensure safety because a hole in the ground which was the brainchild of that incompetent idiot Jason Micallef is proving structurally unsound and likely a danger for pedestrians.

To remove the danger, they’ve erected something right in the middle of the most important street on the island and the flagship of Malta’s heritage and retail activities an iron box that would look unsightly on the dock at the Birżebbuġa harbour.

Since all the Joe Brincats and the Jason Micallefs and the Ray Azzopardis and the others whose heart occasionally bleeds for the Great Siege Memorial because they cannot stand the sight of our protest are not going to tell him, we’re advising the new prime minister to get on the phone and fix this.

But we don’t think he will. Because it is more important for them that the daily protest is hidden and the monthly vigil due this Thursday is disrupted than for them to actually do the job Owen Bonnici says belongs to him: to keep the city in a fit and proper state.

Robert Abela is going to get many of these memos. There are many “mistakes” he must reverse. Now.

Previous:A New Republic (11)
Next:Another Memo to Robert Abela. What are you doing with Konrad Mizzi?