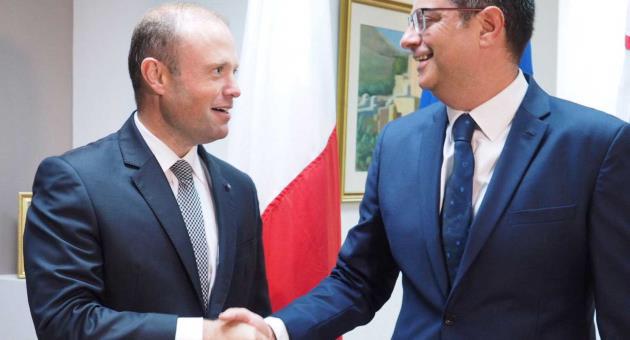 “Don’t allow the Government to blackmail the Opposition Leader”

Partit Nazzjonalista leader Adrian Delia in a hysteric rant on the party radio on Sunday urged party supporters to not allow the government to blackmail the Opposition Leader. Only for the graduate lawyer conveniently forgetting to point out that he is the one allowing the blackmail to happen in the first place. The why this is so, follows below.

In his rant, for those who are not versed in law and therefore could easily be fooled into believing him, he conveniently left out bits and pieces which give us a wider picture. The Financial Intelligence Analysis Unit (FIAU) only pass reports to the police whenever there is a reasonable suspicion that money laundering offences have taken place. Adrian Delia lamented that he asked the FIAU what this was about and got no reply.

He made it seem like it was an attack on him. But as a lawyer, he should know that FIAU would be in breach of the law, had they tipped him off. He was a subject of the Unit’s investigation, when they were collecting intelligence about him. This was not about him explaining to the FIAU. This was the FIAU doing its job following allegations by slain journalist Daphne Caruana Galizia. It seems that they were not mere allegations, since the FIAU did indeed pass a report to the police to investigate further. The analytical report by the FIAU was drawn up in March 2018 based on a story by Caruana Galizia alleging that PN leader Adrian Delia made money from a prostitution racket in the UK using a British bank.

During the public inquiry it transpired in a sworn testimony by a police officer at the Economic Crimes Unit that there is no case against former Economy Minister Chris Cardona. However, a police investigation into Delia is still ongoing. Superintendent Aquilina told the Board of Inquiry, that as far as he was aware there were no inquiries, however, the investigations are still ongoing.

Curiously enough, Adrian Delia mentioned “20 years” in his rant. What he forgot to point out, is that after a fifteen-year time lapse, money laundering offences are prescribed by law. No prosecution will take place even if there is enough evidence collected to prosecute Adrian Delia.

Where does this leave us? It means that despite his hysterical rants, Adrian Delia will not have an opportunity in court to prove his innocence and for the police to bring forward their evidence against him. Police Superintendent Ray Aquilina said that he gave the report to his superiors in 2018. If the offence took place in 2004, add 15 years, then as of last year, 2019 the police can no longer prosecute the suspect, in this case, Adrian Delia.

This begs the question, why haven’t the police prosecuted the Opposition Leader? Who is holding him hostage? Who stands to gain by not prosecuting the leader?

The logical conclusion that one can come to, is that Adrian Delia is allowing the government to blackmail him. In which normal country, do you have an Opposition Leader who had an intelligence report drawn up on him concluding that there is reasonable suspicion that he was involved in money laundering and does not step down?

Maybe it is that person who was installed to ensure that the biggest party in Opposition is dead and buried. By stringing this case along (including asking for irrelevant inquiries) until the prescriptive period (statute of limitations) safely expires, Adrian Delia is rather than trying to clear his name seeking to ensure that he can never be charged. Similarly, by delaying filing charges and ensuring that he cannot clear his name, his political opponents are guaranteed to be able to name-drop “Soho” whenever any form of claim relating to money laundering is floated about thus both diluting the severity and ensuring his lack of electability. A convenient mutually beneficial pact. Beneficial to them. Not to the rest of the nation.

There are enough reasons for him to step aside, including the abysmal ratings at the polls. Who would stay on apart from someone who’s held by the balls?

Previous:RIGHT OF REPLY: From Remenda Grech
Next:Adrian Delia compares himself to Pietru Pawl Busuttil: says he expects PN to defend him in Soho money laundering case