There’s nothing to reflect

A piece in The New Yorker last night reacted to Senator Mitt Romney breaking ranks with his party and voting alone with the Democrats to convict Donald Trump. The author of the piece recalled a commentary by then Junior Senator John Kennedy in a book he had written in the 1950s. In that commentary Kennedy wrote about what militates in the head of a politician against voting according to their conscience but forces them instead to vote with the party line.

Quite a lot actually. Voting with the party allows you to stay in the club that recommended you to your constituents in the first place. There’s some who would say your seat does not really belong to you but to the party that nominated you. Then there’s a sense of obligation from the fact that you were elected to represent your constituents and therefore you should feel obligated to vote in a way your constituents or at least a majority of them would want you to.

Perhaps less obviously, like all human beings or even more than most, politicians prefer to be liked than to be disliked. They enjoy applause better than abuse and insults. In Kennedy’s time there would be organised letter writing by voters and party members wanting to put pressure on their congressman. Facebook is now more explicit, more voluminous, more transparent and more vehement than anything experienced before by an unpopular politician.

Mitt Romney knew just what to expect when he broke ranks with his party yesterday and that includes the likelihood of coming up on the end of his road in national politics.

An entire generation of MPs was culled from the House of Commons in the last UK general election. Anti-Brexit Tories were deselected before the election and replaced by Borisite candidates. A raft of anti-Brexit Labour candidates was swept by the Get Brexit Done wave of candidates from the opposing party.

None of them were stupid or unable to predict what would happen to them. But they decided to act according to their conscience in defiance of their party or their constituents even knowing this would be their last political stand.

We cannot overestimate the certainty and conviction they felt they were doing the right thing. But as Mitt Romney said in his remarkable speech yesterday on the Senate floor at least when his grandchildren ask him where he stood on that fateful day, he can tell them he stood on the side he thought was right. 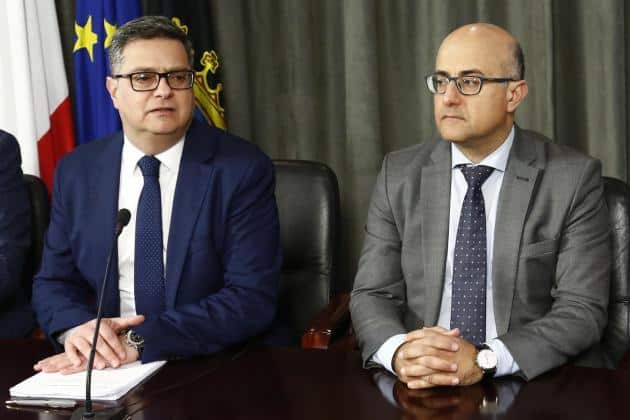 It must be lonely being Jason Azzopardi sometimes. He’s not famous for exercising restraint even when perhaps he should.

But up till now he was the only one after last night’s parliamentary group meeting to denounce his party leader Adrian Delia for betraying his parliamentary colleagues in quicker time than it took Peter’s cockerel to welcome a treasonous morning.

MPs who up till now remained supportive of Adrian Delia retaining his post as party leader have finally yesterday switched sides telling him to leave. Adrian Delia knows from yesterday’s 5 hour tour de table that he does not enjoy the support of anywhere near half of the parliamentary opposition. Constitutionally, it would be his duty at this point to inform President Vella of that fact and to tell the president to ask the other opposition MPs if they could agree on any one else within their ranks that could lead them in parliament.

Of course, there’s the added complication that Adrian Delia does not only have a constitutional role but also a partisan role and as party leader he does not owe his seat to his parliamentary colleagues.

In the room with his parliamentary colleagues Adrian Delia bought some time: a few days in which “to reflect” on what they told him. He climbed down two flights of stairs and told the press the opposite of what he had said within the group. He said he would lead his party to the next general elections, the proud corporal of the Light Brigade.

It’s all become rather academic now. The madness is not in the fact that Adrian Delia uses the party against the party’s MPs even now. The madness is in his entire abortive oeuvre in politics which should never have happened. The madness is in all the occasions party grandees missed in forcing Adrian Delia to do what they should have always known he would never do of his own accord and foolishly expected common sense from someone who thought it made sense to take over a political party without ever having spent a day within it.

The madness is in that club loyalty that Jack Kennedy spoke about when he was in his thirties that prevented so many MPs from saying outside the confines of the party building what Adrian Delia stubbornly ignored when they said it inside: that he’s unsuitable and unsuited for the role of party leader, not to mention opposition leader, not to mention prime minister.

It’s really rather late now. A general election is likely before the weather gets too hot and whoever leads the PN into a campaign over the next three months, whether that’s Adrian Delia or his replacement, will be leading a demoralised, divided, decrepit party to a crushing defeat.

But put away from your mind any notion that Adrian Delia remains glued to his seat out of some heroic self-sacrifice to ensure he is replaced by a new leader after an election defeat, letting the new gal rebuild with some decent lead time before another election.

Adrian Delia wants to stay because he can. Because only Jason Azzopardi – and perhaps a handful who might follow him in the next few hours unless inertia or disaster fatigue has worn them down as well – would denounce him.

His Soho past is likely beyond the statute of limitations anyway, which means the police would never be able to charge him even if they find sufficient evidence to prove a crime.

Without a devastating blow of a criminal prosecution he can survive, relying on people like Jason Azzopardi being swallowed up by the vehement disapproval of their party and their constituents.

And Adrian Delia stays on, perverting the notion of a captain going down with his ship, becoming the false hero that scuppers his ship so she goes down with him.

Vampires cannot see their own reflections in mirrors. There is no substance for parasites to reflect.

At least Jason Azzopardi will be able to tell his own reflection he did the right thing.

Previous:UAE officials cancel December 17 Black meeting with Europol at the last minute: anything to do with Joseph Muscat’s Dubai trip?
Next:GUEST SERIES: The Subjection of the Social Sector (Part 2)