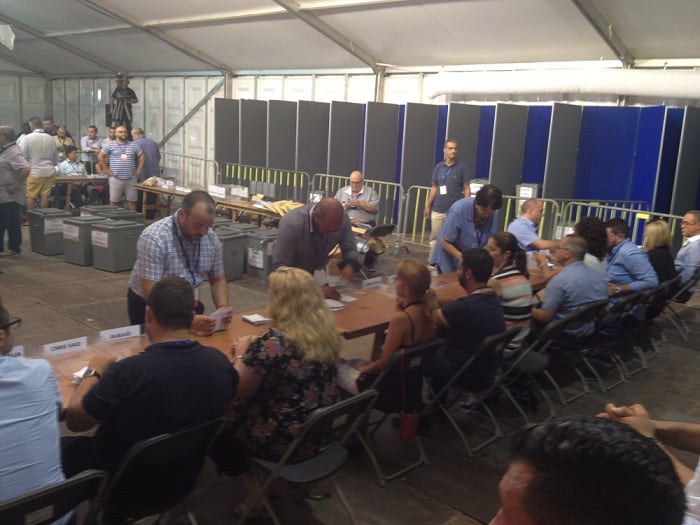 There are no certain outcomes in elections. Adrian Delia lost the confidence of the majority of his parliamentary group, of the executive committee of his party and, after Saturday’s ballot on whether to call a fresh election for his post, a majority of the party’s general council, its highest organ.

But in all three bodies Adrian Delia enjoys the support of a large minority. Saturday he secured 44% of the vote. It wasn’t enough to have his way on the specific question being asked but the question was itself a postponement of the question that really matters. Even if he was the one to present it that way, the general council did not vote on a confidence motion over last weekend. What that means is that people voting knew that Adrian Delia’s dismissal would not be a direct consequence of their vote. Some may have voted differently had it been a matter of political life or death for the party leader. All that was needed was for 3% to feel uncomfortable firing the boss and Adrian Delia would have definitively survived.

He should not, of course. The support of a narrow majority – let alone a minority – is not enough for any leader who is vaguely interested in keeping a political party together and present it to the electorate as a viable electoral option.

When Lawrence Gonzi called for a confidence vote after one of Franco Debono’s more dramatic tantrums, he set himself a target minimum support of 95% in order to stay on. The general council returned him with 96%.

Consider Margaret Thatcher’s case. A ballot was forced on her when she was in office as prime minister but the Conservatives were trailing Labour by 14%. Polls showed she was less popular than her party and other potential leaders were polling better results. She was also unpopular with her MPs who did not doubt her abilities but felt she decided without them and were unhappy with her rule.

In a leadership ballot, Margaret Thatcher won 55% of the vote, a clear majority but according to party rules still requiring a second ballot which she planned to contest. But her cabinet persuaded her that with such a large minority voting against her in a first ballot, the interests of the party required her to resign. She did. Not without tears.

I refer to these historical examples to make the point that in internal party elections statutory definitions of majorities and victories are secondary. The real considerations are political.

When Adrian Delia justifies, on legal grounds, ignoring three governing bodies of the party and insisting on facing the party members in another ballot he is obviously ignoring the political reality that win or lose, his continued resistance continues to harm the party he’s supposed to have been leading. But we’ve covered this ground, many times.

Between now and mid-September, the third anniversary of his election, there are far more opportunities for harm still to come up. I’ve seen many comments of people fully expecting the due diligence process to block his candidature. After all, what due diligence process worthy of that name would clear a candidate for office with unresolved money laundering investigations, unexplained conversations with Mafiosi journalist-killers and a record of divisive, unproductive and reactionary politics?

Legally, of course, they’re right. A due diligence process, however superficial, should block Adrian Delia. But as with Margaret Thatcher’s majority result, what is correct legally is beside the point. Politically there is only one hurdle that Adrian Delia can stumble at: and that’s the secret ballots among the party members.

If for whatever reason, however legally sound and justified, he is prevented from appearing on the ballot sheet cast by members, too many party members will give credibility to his claim that they have been cheated of their presumed right to retain him. The argument is not limited to the technical barrier of due diligence. It is also true of the political hurdle that comes after.

There’s the second hurdle on the way, which is the short-listing of the candidates before the final ballot. The general council considers all candidates and whittles them down to two for the members to make a final choice. After Friday’s result, where 44% voted to prevent other candidates challenging Adrian Delia in an election, Adrian Delia has the reasonable hope of ranking in the top two at the general council stage.

If he is to repeat his methods from the election of three years ago, he’ll also have a wingman alongside him to serve the purpose Frank Portelli served 3 years ago. Frank Portelli never had a realistic hope of winning that election but he could fire broadsides at Adrian Delia’s rivals, hurt their chances and draw fire in reaction away from the real candidate. It’s not unlikely we get another Sancho Panza this time as well, throwing Adrian Delia’s enemies “in the rubbish heap of history” as Frank Portelli claimed he had done with Daphne Caruana Galizia.

For Adrian Delia to be definitively defeated he must be defeated at the field he has vehemently chosen throughout his many crises of the last three years. His mantra had always been that he’d stay on for as long as the members wanted him to. He referred to the ballot that elected him three years ago and inferred that he still enjoys the support he enjoyed then.

Quite apart from the fact that politically the support of a small majority of members is sufficient for a party leader to be elected (legally) but insufficient for him to stay on (politically).

There’s also the fact that in all party organs his support has shrunk. He lost majorities in all three organs. Is that a reflection of his support in the entire membership? Not necessarily.

The second observation then is that as things stand Adrian Delia can still win, narrowly, a ballot among the membership. It would be the final blow for the viability of the Nationalist Party as it would definitively split it down the middle. But it’s not like Adrian Delia ever cared for the politics of it all. Legally, he would have won. Like the avukat ta’ klassi that he is.