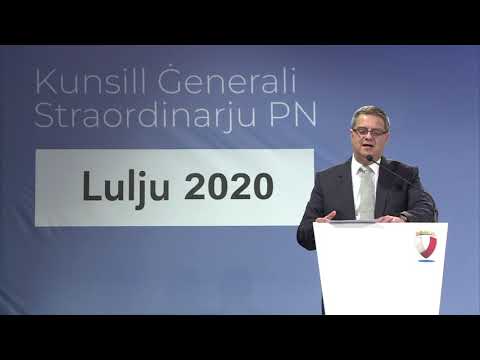 But for him to take the floor yesterday at the PN’s general council and try to guilt councillors into thinking his marriage broke down because of them was the ultimate gaslighting. No marriage breakdown is entirely a single person’s fault. But to blame party councillors is so unfair, so untrue and so in character for Adrian Delia who goes about his life blaming everyone but himself for his disastrous existence.

From what we know of his marriage the miracle really is that it lasted as long as it did, not that it broke down when it did. But let’s leave that aside.

Let’s take what Adrian Delia says at face value. Imagine you’re a bank and you employed this man. You caught him passing commercial secrets to your competitor and his sales record the past three years has been shit and he’s never improved his performance. You call him in to give him notice of his dismissal. And in his defence he says his wife left him and bundled away the kids because he did so much over-time at the bank.

What do you say to the man? Do you let him guilt you and accept that he gave up his family for your bank and therefore you are to ignore his wrong-doing and flat performance? You do so at your cost and at your peril.

This is the card Adrian Delia played yesterday with the board of the organisation that employs him: because that is what general councillors are. They need to decide if the CEO they hired three years ago should stay on or if they should fire him. They have a pile of reasons to dismiss him but his defence has nothing to do with his job. His defence is he has lost his wife.

You’ve already had to contend with that for some time. When his wife left him, he went through a late middle age wild phase, staying out late, coming in to work late, dishevelled and not altogether there. Until he stuck with a girlfriend who sleeps in his office. I say ‘his’ office, but it isn’t really is it? Because the party does not belong to him. He’s been hired by the party to work for it and the party has given him an office to work from. But he uses it for his girlfriend to sleep in with him. What would you say to that if you were a bank that employs him?

At a late-night meeting recently, senior officials asked the party leader for a chinwag in his office. So he went down first to ask his girlfriend to put a shirt on so the party officials can come in to speak to him. Is this the general councillors’ fault as well?

The judicial protest he filed yesterday against Jason Azzopardi is yet more gaslighting. He played that card in the last minute of his election campaign three years ago when he filed a pile of lawsuits against Daphne Caruana Galizia saying she lied about him. Nothing that has emerged since then suggests that she did.

Now he’s doing it to Jason Azzopardi ostensibly because Jason Azzopardi told people they should expect to see the reported WhatsApp chats he had with Yorgen Fenech after the latter was outed as a politician-briber.

To understand just how meschino his behaviour is, you need to remind yourself that since the Times of Malta reported the detail of his exchanges with Yorgen Fenech he has stopped denying he was in touch with him. He was repeatedly asked to deny he’s exchanged these messages. He repeatedly avoided the question, merely saying instead that he’s a victim of some sort of conspiracy.

He reacted yesterday to David Casa saying in court that he did not possess evidence that Adrian Delia was offered or took payment to push him out of the European Parliament campaign. Adrian Delia pounced on this saying it means even David Casa agrees it did not happen. David Casa took pains to explain that’s not what he meant at all. He could confirm he was elbowed out of the election campaign. But if anyone had evidence Adrian Delia promised Yorgen Fenech to oust him, they would not likely give it to him.

Pick a line out of context, twist it beyond recognition, and hammer it in to create doubt, confusion and collective guilt. Gaslighting 101.

Adrian Delia is working to make general councillors doubt their own sanity. Can you imagine being married to this guy? Yes, you can. He’s been party leader for three years too many and there’s no way he’d fix his way or call it quits. We’re just supposed to stick with him and thank him for his grace and magnanimity.

Previous:GUEST VERSES (in Maltese): The Woman Who Had Enough
Next:GUEST POST: What a week