Two years ago today, the government decided to ban the protest demanding for truth and justice for Daphne Caruana Galizia. The government ruled that 11 months of protest had been quite enough and it was time to turn the page. 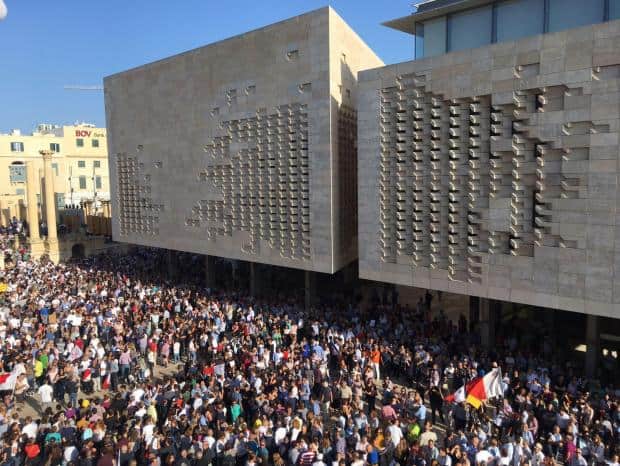 After the initial four or so large protests called by the Civil Society Network and others, the protest took the form of monthly vigils on the 16th of every month. They were small, cold gatherings of a few hundreds. There were probably one or two vigils when less than a 100 people showed up. 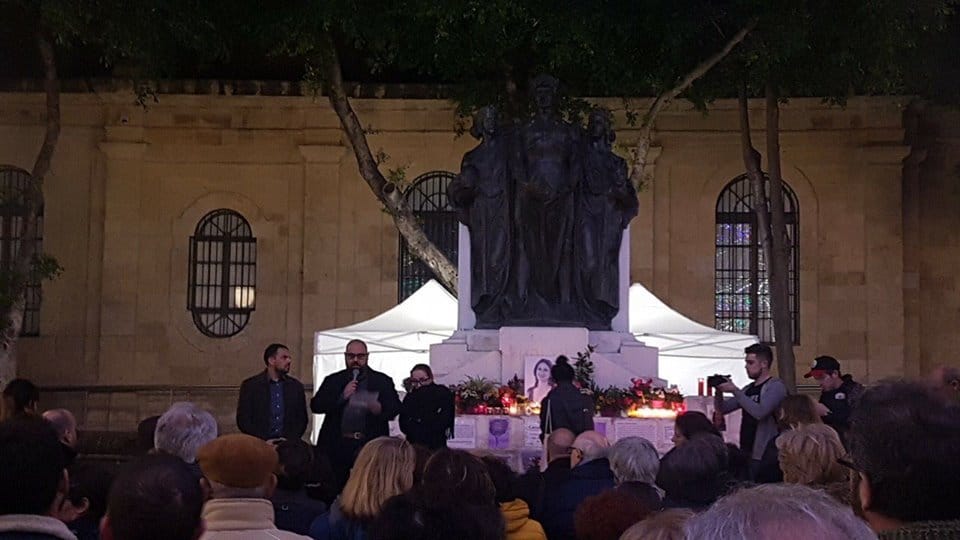 In between vigils people visited the memorial opposite the law courts leaving a picture of Daphne, some candles or flowers, or a message on a card recalling the anger and frustration at the rubber wall built around the perpetrators of this crime. 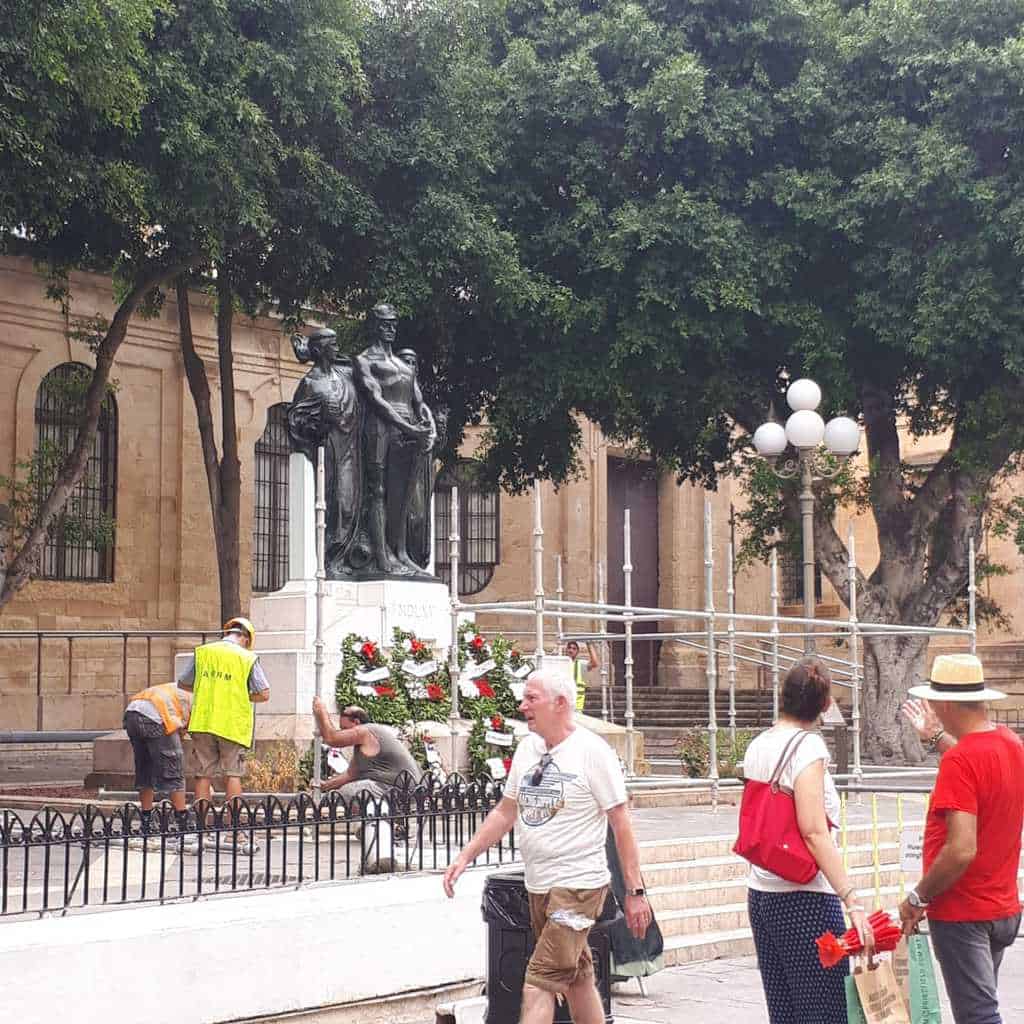 When the 8 September holiday celebrations came, the memorial was cleared of all signs of the Daphne protest. No sooner had the president left the place, that a hoarding was built all the way around the memorial to prevent anyone from getting to it. Officially they said they meant to ‘restore’ the memorial but it had only been restored 8 years earlier. Not a brush or a wiping cloth got near the memorial for several months.

So protesters stuck their posters to the hoarding instead. It was never about the Great Siege figures after all. It was always about a spot in front of the law courts and the hoarding proved to be an even better idea than the marble plinth and the soil patch around it.

Not that he needed any help but Owen Bonnici looked really stupid now. So a battle of resistance and oppression started that day in September. Every day the protest banners and flowers and candles would be taken away by Owen Bonnici’s minions. And every day protesters would bring them back. 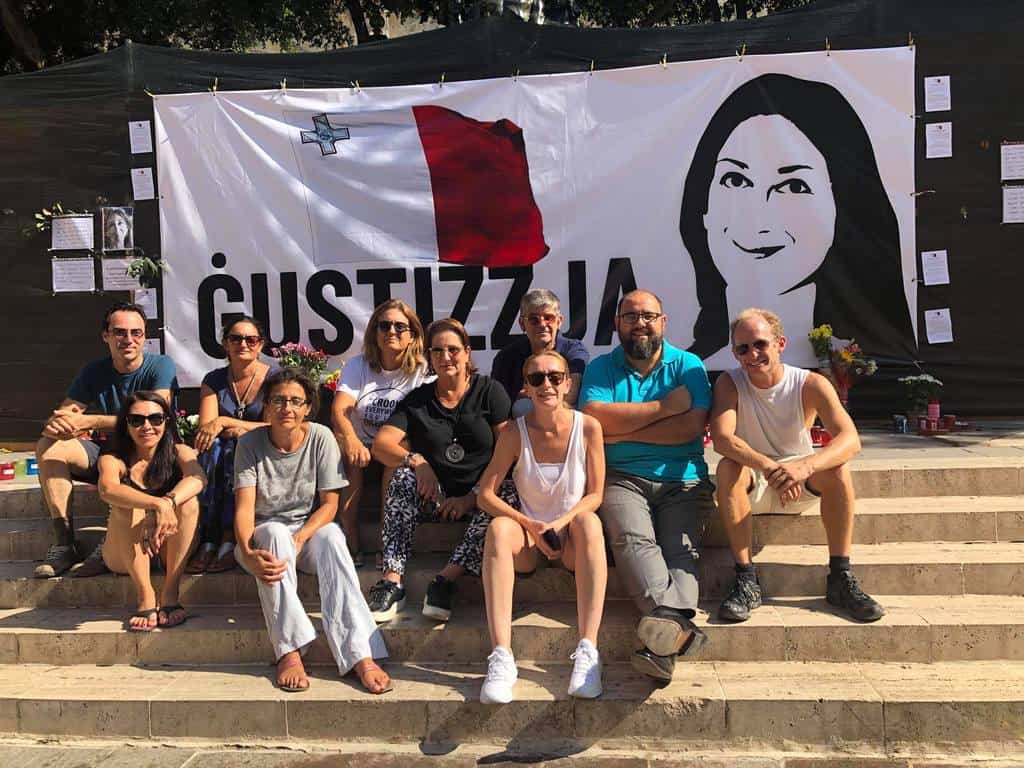 This photo is from two years ago today. It was a small act of defiance when we decided to sleep by the memorial to make sure everything is in place for the September 16 vigil. The trash people came to remove our protest at around 3am but when they saw us there, laughing, talking, sitting around looking deceptively calm, they turned and went away.

We decided to stay with the stuff because the court refused a request I made for a temporary injunction to order the government to respect the protest while a decision was taken on whether the government had the right to do this.

Without the protection of the injunction we battled the government in court for over a year, arguing why disallowing the protest was heartless and divisive, but also illegal and a breach of the fundamental right to free expression. It was not quite as definitive in silencing us as the bomb silence Daphne, but in denying us our right to protest in her name, Owen Bonnici sought to kill her again. Every day.

The battle in court was matched with the battle in the square. Every day, sometimes several times a day, activists came back, defying the hecklers, the surly suldati tal-azzar, and, on occasion, the thugs who physically assaulted them, to renew their protest.

Until a court finally agreed: Owen Bonnici, his government, his party, were guilty of suppressing fundamental human rights. On top of that they justified the hatred and the division they sowed with a vexatious claim that they were doing their job as a government. They were doing the opposite.

When we slept there, when we filed the case in court, when we went back again and again to renew our protest, some said we were politically motivated fanatics. The ones who said that were politically motivated fanatics themselves so that did not matter. But others without sympathy to the government thought we were petty, self-indulgent, attention-seeking and oblivious to the futility of our efforts.

That chummy bunch on those steps, and the hundreds that would have been there had it been their shift to guard the memorial that September of two years ago, were not standing guard for a flower, or a poster, or a candle. They stood guard to protect a powerful symbol, the peaceful but inescapably determined claim for truth and justice.

We’ve won a few battles since then. But we’re still losing the war. Robert Abela is doing worse than banning a protest. He’s moving to ban something far more useful in the pursuit of truth: the Daphne inquiry.

It’s time again to be defiant.