How to get away with murder 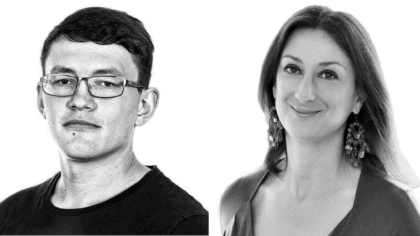 Marian Kocner was shockingly acquitted today of the charge of ordering the murder of Slovak journalist Jan Kuciak. The decision by the Slovak court is subject to appeal in front of the country’s Supreme Court. And Kocner will not walk free today. Last February he was sentenced for 19 years in prison for one of the financial crimes uncovered by the investigations brought about by Jan Kuciak’s killing.

Today’s events are incredibly painful for Jan’s family and the family of his girlfriend Martina Kusnirova who was killed with Jan by hitmen.

The charges against the hired assassins stuck and tough prison sentences were handed down. But it proved harder to secure convictions higher up the scale.

It’s a painful but unsurprising fact that even from behind bars, Marian Kocner enjoys residual influence on the political and judicial structures of Slovakia.

The investigations into Jan Kuciak’s killing uncovered heaps of evidence about the corrupt relationship between crime and the state and cost the political careers of many officials and the start of proceedings against several of them. But in spite of all the evidence heard over the last 8 months, Slovakia did not secure the conviction of Marian Kocner and of an associate of his accused of being part of the conspiracy to murder the journalist.

It’s hard to find lessons from such an injustice. Jan Kuciak’s journalism has been transformative for his country. It has broken open the rot of corruption. It has forced out government officials and their criminal associates. It has galvanised that country’s civil society, brought into the country’s presidency someone from outside the conventional political scene and stimulated a liberating process of reckoning for the country. Slovakia is a better country because Jan Kuciak worked in it.

And yet Slovakia did not have it in itself to return that favour by at least giving Jan Kuciak and Martina Kusnirova justice for their taking off. All is not lost. But it feels that way.

Reading this The New York Times report from Bratislava gives one the shivers. The parallels with the situation in Malta are too many to count. We push from our mind the notion that this a premonition of what might happen in Malta at the end of these traumatic court proceedings. But as we try to ignore the sense of foreboding, there’s no doubt Yorgen Fenech, Keith Schembri and Joseph Muscat are reading about Marian Kocner’s fate today much less darkly than the rest of us.

It is perhaps the worst time to say this, but there’s a lesson for us here as well. As other political deaths here teach us, justice is extremely hard to come by. No one was ever charged for the killing of Karin Grech. No one was convicted for the killing of Raymond Caruana. Meinrad Calleja was acquitted of the charge of complicity in the attempted murder of Richard Cachia Caruana.

And we wait still for anyone to be convicted of the assassination of Daphne Caruana Galizia.

In any case, the bar of evidence needed to secure the conviction of someone charged with murder is as high as it gets. In a judicial environment poisoned by politics and by corruption, that bar may prove impossible to overcome even when the same evidence in an identical case without the political ramifications would secure the murderers’ convictions many times over.

We should not be hostages to fortune. We cannot live in fear of the day when Daphne’s killers laugh their way out of jail. The mastermind of her killing paid bribes, laundered money, conspired to cover up crime, participated in a criminal conspiracy, dodged tax. Other people the mastermind of Daphne’s killing says are also co-conspirators in her murder accepted bribes, laundered money, participated in a criminal conspiracy, dodged tax.

No charges have been issued on the Panama Papers yet. The evidence collected when Pilatus Bank was shut down has led to zero arrests. The 17 Black revelations have led to no criminal action whatsoever.

What are we waiting for? For all these people to abscond perhaps licensed to leave with some miscarriage of justice, the sort that is making Marian Kucner order a double helping of his prison meal today?

Justice for journalists killed on the line requires their murderers punished for commissioning their taking off. No doubt about that. But failing that, punishing the same murderers for the crimes the journalists exposed in their life is a good place to start. It would be doubly painful if on top of getting away with murder, Daphne’s killers get away with the crimes they killed her for.

We’ve waited long enough. Get on with it.

Previous:Robert Abela is tired of the truth
Next:Thoughts from one election, delivered to another.