Thoughts from one election, delivered to another.

Three years ago this week Adrian Delia and Chris Said were shortlisted for a two-man race for the leadership of the Nationalist Party. I had written an article on The Sunday Times reviewing Adrian Delia’s new way, what it meant, what his indictment of his predecessors meant, and why I did not support any of it.

So much water has passed under the bridge and yet much of those initial observations remain valid. Because of all the objections to Adrian Delia’s leadership of the PN, including his failure to deliver any in the time he’s had, there’s one underlying and fundamental problem with his persona, his style, his “way” of doing politics.

He is a demagogue, a man whose supreme self-confidence trumps any other quality for leadership, who expects his politics and his opinions to be justified merely by the fact of being him. In other words he does not follow in the party’s traditions of leaders who acquire their teams’ confidence as a factor of the results they achieve. He is one to expect loyalty by entitlement, obedience by rank, authority by divine right.

One leader under god.

Perhaps you’ll find this article from three years ago, worth a fresh visit. 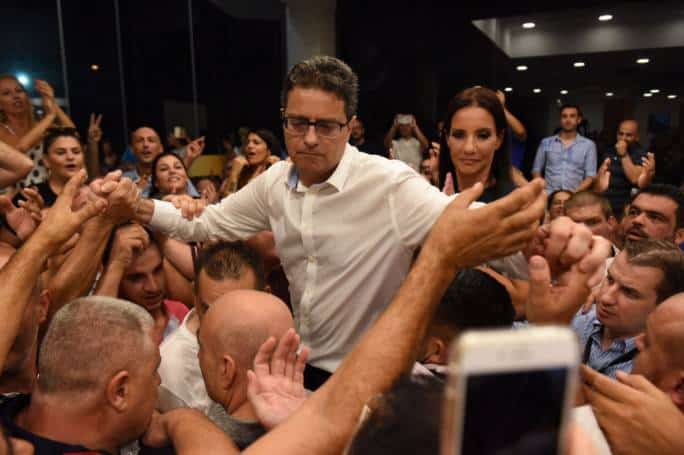 First published on The Sunday Times of Malta. 3 September 2017.

As you read this, you know more than I did while I was writing it. What matters now is whether Adrian Delia is still in the race for PN leader. Never has a single individual shot to such prominence in such a short time. Three months ago, you would have only heard of him if you were into local football. Now the country is trying to imagine him as its prime minister.

In the self-same act of campaigning, he presented an argument alien to Maltese politics: that the real preparation for government leadership is never having been a politician. What some felt should have disqualified him – his complete lack of experience and knowledge of the profession – he presented as his most important badge.

“Career politicians”, as he described anyone who came before him, have no real life knowledge. And, if anyone could dig into his past and unearth inexplicable bank accounts with funds from shady sources, that was just proof of his personal experience of the compromises normal people make. The puritan zealotry of careerists locks veteran politicians into a caste of putrid priesthood, useless to the rest of us who want to be governed by ‘normal’ people.

This sums up the new way. The old way of politics as a profession brought about serial losses for the PN. The new way promises to change that. They say the past is no guarantee of the future. But the complete absence of a political past makes that argument moot.

As Delia’s prospects were assessed by the same career politicians he blamed for the ills of the party and the hiccups of his campaign, what had been anathema before June started rising to the surface in the form of careful whispers and sideway glances. There may have to be a life after the PN.

PN officials have a notoriously short lifetime. People lose seats like plastic ducks at a funfair. Yesterday’s full-time MP is today’s online pundit. The incumbent gave up his seat in the shortest leadership timeframe of any Maltese political party since the last world war, assuming full responsibility, along with the entire administration of the party, for more than he probably should have. Clinging to power indeed!

The real reason people have now had to imagine a political life after the PN is because the values the PN stood for, just shy of 140 years, may need a new home. Those ideals cannot be made to give way to a personality cult.

Just across the parliamentary aisle, a lesson from history looms large, and hindsight gives us the benefit of knowing that a repeat is the last thing we want to experience. The Labour Party’s political mission, such as it is, became an embarrassment to its leaders over time. So they abandoned the reason for their existence as a party and invested in a personal religion that defied the leader. After Dom Mintoff, Labour spent decades in the wilderness trying to find a polished bully to replace him. And then they did: in the person of Joseph Muscat, who was willing and able to wear the divine mantle and to exploit that mystical status for personal gain.

The PN’s mission focused on placing human dignity at the centre of politics, transforming humanist values inspired by Christianity into the needs of today’s society, decentralising power, creating wealth through free markets while ensuring no one was left behind. That mission served the country very well while Labour wallowed in its cold stupor for 25 years.

Malta was dragged from a violent post-colonial third world chaos in 1987 and transformed into a modern euro economy with full employment and sustained economic equality by 2013.

No demigods were required. PN leaders were not self-anointed, in the manner of a Joseph Muscat doing a Bonaparte and crowning himself emperor. The PN is not a party of emperors. It is not a party of career politicians either. It is a party with a vision for Malta that may not fit comfortably in 140-character tweets and may not be embodied by a deified leader, no matter how charismatic.

Someone has to come up with solutions to the gross economic inequalities that are emerging; to the complexities of unmanaged ethnic divisions and sectarian prejudice; to the imbalance of an asphalt jungle and an economy built on clay feet.

Someone has to be there when Malta confronts the reality that demagoguery and cultist politics are a petri dish for corruption and eventual but inevitable social and economic breakdown.

The people who have made the service of Malta their life’s work are less bothered with the short term rush of winning.

Mizzi, Borg Olivier and Fenech Adami won those elections way before they had become living legends. They earned their legendary status in government the hard way, after much blood, sweat and tears.

Those who remember them are uncomfortable with the self-aggrandisement and hero worship that we have experienced in these shocking months that have played so unkindly with the trauma of June’s electoral loss. But for the first time, discomfort is such that the unthinkable has become imaginable.

Previous:How to get away with murder
Next:A man with no name