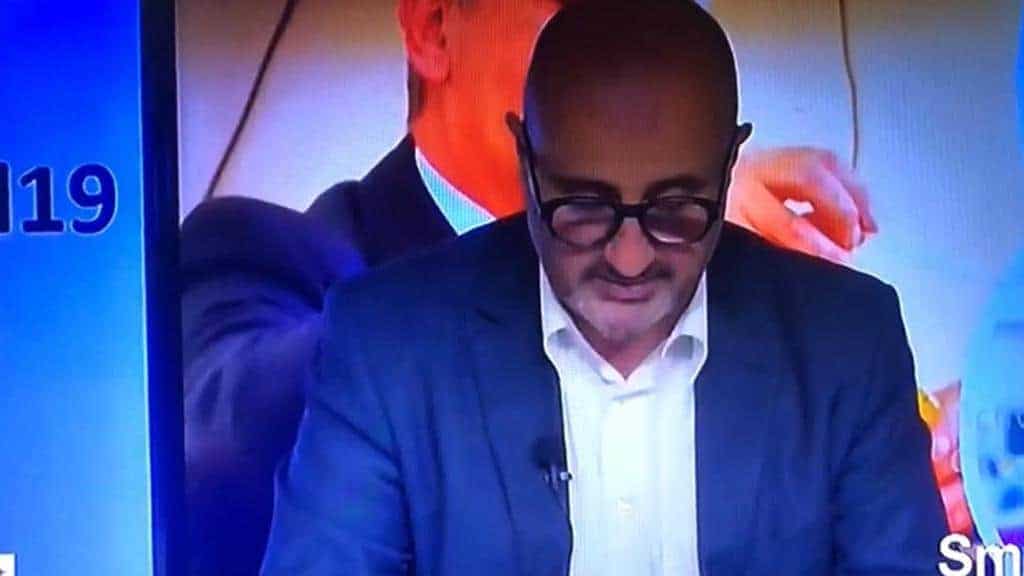 Yesterday he published this post saying the owner of Xejk TV banned the repeat broadcast of a TV show he ran where he hosted a bunch of uncertified lunatics to speak about the coronavirus. 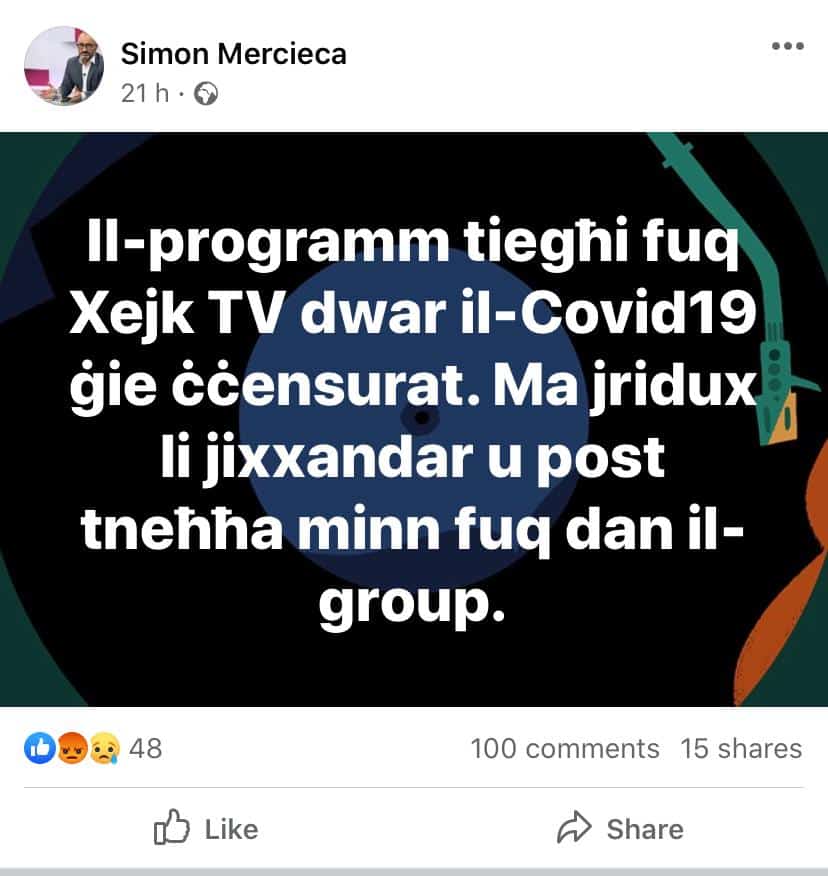 I have seen clips from this TV show which I will not reproduce here for reasons that will become clear. But for your benefit, because you need to understand what this is about, I’ll give you some choice highlights.

The unevolved apes that called themselves the “Natural Health Alliance” were explaining with all seriousness the micro-chip conspiracy theory saying that the coronavirus is a fiction perpetrated by Bill Gates as part of his 007-baddie plan to inject nano-bots (variously described in the program as “a chemical”, “pieces of silver”, “chips” and “small robots”) in the bodies of us all when we’re being vaccinated for covid-19. The plan is for these “small robots” to use 5G technology to transmit to “a central computer in the cloud” personal information about you. Now Bill Gates will now “if you’re depressed” or “if you’re pregnant” because somehow this is important to him on his way to take over the world.

They did not invent this mad conspiracy theory but they are spreading it, speaking as if they have a bleeding idea of what they’re talking about.

Everyone has the right to be stupid, but broadcasters have a responsibility to protect the health of viewers who trust them not to present them with complete fiction masked as scientific fact. For many people – certainly the typical Xejk TV viewer as I imagine one to be – talk of “nano-bots” and “5G” in a TV discussion program sounds technical enough to switch on the assumption switch we all have in our brains when we listen to someone we trust that tells what they are telling us, even if we do not understand it, must be true.

You may not understand what your oncologist tells you about your thyroid but you assume they know what they’re talking about when they tell you it’s better for you if they slice half of it off pronto. You trust them with your thyroid. You trust them with your life because you assume the extracted portion of a gland you’re not entirely sure what it is for is not a part of someone’s evil plan to take over the world.

Why shouldn’t we trust Simon Mercieca and his guests with their “opinions” on wearing masks and vaccinating against coronavirus then?

Simon Mercieca cannot even plead the Jerry Springer defence of giving a platform to tinfoil hat conspiracy freaks whilst not actually endorsing what they say. Simon Mercieca endorses what his freaks say. In this program he declared himself a “Trampist”, that’s a humanoid of the ‘pro-Donald Trump’ persuasion. That declaration then proceeds to underline his attitude to what else he says during the program.

Consider how one of his guests says that the World Health Organisation “permitted” the Black Lives Matter protests in the US and elsewhere. It didn’t. Another guest then built on that fiction to say that George Soros financed double agents to commit violent acts during the BLM protests in order to “provoke a reaction in white people”. White people, thankfully, did not fall for the trap, this genius says, “because God is with us”.

I suppose if you know about “small robots” injected in your vein, you would also have the rather esoteric knowledge that God is white.

Simon Mercieca’s reaction? “Naqblu.” (‘We agree’). (This is not referring to the divine being’s skin tone but to George Soros’s evil plan to provoke racist trailer trash into violent reprisals). Simon Mercieca has already applied the Jew-baiting George Soros conspiracy theory that the philanthropist and civil rights campaigner presides over a Jewish conspiracy for world domination, to the removal of Adrian Delia. Apparently George Soros cannot take over the world while Adrian Delia is still PN leader.

This is seriously horrible stuff. Not just because it doesn’t miss the irony of creating an equivalence between a health mask and yellow stars sown on Jewish coats but also because there’s a clear consequence to encouraging people not to wear masks as if this was some noble act of political defiance against oppression. All Simon Mercieca says in reaction to all this is “Naqblu”.

More madness. A guest explains that covid was invented to pave the way for “transhumanism”, that’s the plan, for she thinks it exists, to make cyborgs of us all. “This means someone will control you,” a deluded sociopath tells Simon Mercieca. Simon Mercieca replies eloquently: “Naqblu.”

Here’s another one. A guest says he “knows” that the vaccine is being prepared by a company owned by three baddies: Anthony Fauci who heads the US’s effort, such as it is, to combat the coronavirus, Bill Gates who wants to make us all robots in his army aimed at world domination, and, wait for it, Jeffrey Epstein. He knows because he says he was offered to hold stock in this evil company. No one laughs.

Never mind the fact that Jeffrey Epstein killed himself in August of last year before the coronavirus had even emerged in China. The senior lecturer in history does not point out this historical fact either.

At one point in the program Simon Mercieca says he would invite health minister Chris Fearne and health superintendent Charmaine Gauci “to give their point of view”.

You see, this is the problem right there. There is no balance between science and fiction. There is neutrality between what the science tells us and the lies conspiracy theorists concoct. Even if the liars have PhDs.

My gripe here is not with the loons. There will always be loons. My gripe here is with Simon Mercieca in his role of a TV show host. Let’s say he was hosting a discussion on climate change, and given he confesses to being a “Trumpist” this is not a big leap of imagination. On the one hand he invites a scientist who explains the science of climate change. He would be representing the views of 99.99% of the scientific community. But on the other hand, to present “the other point of view” the TV hosts also invites a scientist who thinks climate change is a hoax.

You can apply that to a debate between a scientist and a “creationist” and any other pair that argue between the broad scientific consensus and the sickening but fertile imagination of damp cellar nerds.

In presenting the two ‘sides’ as alternatives one can pick and choose from like you choose between the policy views of two politicians on a TV debate, the truth is reduced to the same standing as the lie and people who rely on experts to tell them what the truth is, will inevitably rely on the version that sounds more appealing to them.

The version that tells them they do not need the inconvenience of changing their ways (like wearing a mask or reducing one’s travel carbon footprint). The version that appeals to their fears: of disease, of losing control over their lives, of being prevented by powerful people from living their lives to the full.

Simon Mercieca is not merely unequipped with the ethics to understand this and to act responsibly, he goes so far as to claim that the effort of the health department and the decision of his station’s owner not to give more air to these irresponsible and evil lies is somehow a breach of his and his guests’ right to free expression.

Everyone is entitled to their opinion. You can have an opinion that says you don’t like Geoffrey Chaucer but you like Kanye West. But saying the coronavirus is a fiction and you don’t need to protect yourselves and others from it, amounts to spreading of disease, more effective even than willingly infecting people by coughing in their faces. Speaking on TV and saying that a vaccine against the coronavirus is secretly intended to take away your freedom has the effect of encouraging people to refuse to be vaccinated. That has the effect of more disease and suffering than we need to endure.

Simon Mercieca does not only have freedoms. He has responsibilities to a country that trusts him. As a TV show host, he has the responsibility to give the floor to people qualified to explain to people relying on his show to acquire the truth. He should understand this. Few in the country are as qualified as he is to speak about the matters he studies and researches.

And yet, it seems clear, this man has much learning and little understanding. It’s one thing to be disgusted by his views. But now he’s becoming a proper health hazard. I’m not arguing for any outside intervention to somehow restrain him. I’m arguing that he needs to grow up and realise that the fun he’s having getting attention with this is going to cause people to get sick. It’s going to cause people to die.

Previous:When a state is responsible for murder
Next:Judge in Ali Sadr trial, criticises harshly misconduct in US prosecutor’s office