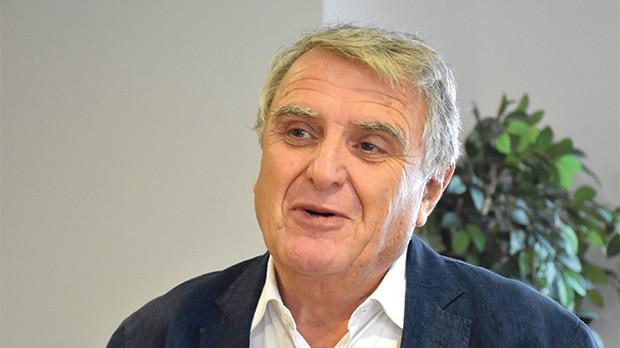 After all that’s been said and done, the statement by the Gasan family today (scroll down for a full copy) feigns surprise at the corruption behind the Electrogas contract and the murder of Daphne Caruana Galizia that sought to cover that corruption up.

Some choice quotes from their statement: “We declare that if there is substance to the allegations of corruption in relation to the project…” If? You’re asking this now? The Gasans say they never appointed a member on the board because they have a “small” 11.25% shareholding. But even if we must believe they had no access to privileged information, they surely must have read the news reports like the rest of us.

Have the Gasans never wondered how the procurement documents for this contract were drawn up so quickly after the June 2013 election? Did they never think it was strange that the technical selection committee was led by Brian Tonna who was also the auditor working for their partner, Yorgen Fenech?

When the financier of the project Gasol dropped out because of bankruptcy, were Gasan surprised their bid for the government contract did not crash on the rocks? Were they not flabbergasted to discover the government allowed them to absorb the lead shareholder and stay in the race?

Did Gasan not find it odd that when the finance their consortium promised sunk with Gasol, the government agreed to provide a guarantee to their banks for the financing of the project instead? Did they not think it extraordinary that the government was allowing them to take the profits from the deal whilst the government retained the risk, at least for some time?

The Gasan family have decades of experience in public procurement. Were they not stunned at their incredibly good fortune when they won this deal in record time and in spite of the complete mess they were in? Have the Gasans won many contracts where the government agreed, after the contract has been signed, to pay their tax for them?

Have the Gasans ever come across a contract where the government agreed to defer the repayment of penalties for the entire duration of the contract, waive all interests on deferred payments and to neutralise the amount due with an equivalent counter-charge at the end of the contract, effectively waiving the value of the penalties altogether?

Did the Gasans think they were incredibly lucky? Did they think that the basic laws of doing business: that everything has a price, that nothing good is easy, that making money from a government contract requires your offer to be the best – the same rules the Gasans had to deal with since the dawn of the twentieth century – somehow did not apply in the case of the Electrogas deal?

The Gasans’ statement pleads, without actually using the word, naivety, that justification for all that’s gone wrong these last 7 years. It’s like all those Ministers saying Konrad Mizzi was naïve when he opened a secret Panama company owned by a secret New Zealand trust. Naïve? What’s this? Did he go in a car with a strange man because he promised him an ice cream? Did he accidentally open a company in Panama on his way to mass at the Nazzarenu by the Ferries?

Have the Gasans, hardened by generations of shrewd money making and deal breaking, suddenly developed an acute case of childish gullibility?

There’s no “if”. Anyone who’s ever been offered a free ice cream by a stranger would realise that what’s too good to be true, probably isn’t. The Gasans, even if we are to be prepared to accept never “participated in, supported, condoned or knew about corruption”, benefited from it and what’s more must have understood very early on that such good fortune does not exist in the real world and if they kept winning at this roulette table someone on their side must have fixed the odds.

I’m reminded of the extraordinarily good fortune Alfred Degiorgio enjoyed when gambling at the Portomaso Casino. No one walks in a casino with €500,000, passes it through the system and comes out with no more than €30,000 in losses. If that happens – as it did – you can assume the game is fixed.

The Gasans may have never been part of the Electrogas board of directors, but they were part of its shareholding. They held that ownership through a holding company, GEM Holdings, that they co-owned with the Fenech family and the Apap Bologna family. Have they never wondered why Yorgen Fenech held a personal shareholding in GEM Holdings amounting to around 10% of that company over and above the shareholding belonging to the Fenech family?

Did they never wonder why Yorgen Fenech stood to earn an extra 10% of the profits of GEM Holdings? Did they never ask him what he would do with that money? I’m going to take their statement at face value and accept they never did. But I will not accept they were ‘too naïve’ to understand without having to ask what the extra 10% was for. Especially as they kept being blessed by uncharacteristically generous decisions by the government.

And knowing all this, when the Panama Papers came out and exposed Konrad Mizzi’s and Keith Schembri’s Panama companies, did the Gasans not wonder – as we all did – if that might explain how the Electrogas company sailed between Scylla and Charybdis like a pleasure yacht down the Nile? And did they not wonder at the millennial astrological alignment that saw to it that Brian Tonna – Yorgen Fenech’s auditor, and the government’s chief adjudicator of the Electrogas contract – was also, quite coincidentally, the one to set up the Panama companies for Mizzi and Schembri?

And even if that wasn’t when they started to wonder, is it possible they never connected their love affair with Lady Fortune with the 17 Black revelations published in April 2018? And did they feel none of the mortification they say they feel now when, in October 2018, Yorgen Fenech, their business partner, the owner of an extra 10% of GEM Holdings on the board of which they certainly sat, turned out to be owner of 17 Black?

Why did Daphne Caruana Galizia realise so long before them that they held shares in a contract that profited from corruption? Why did The Daphne Project work it out so long before them? Why did the entire country understand the connection between Electrogas and 17 Black and Schembri’s and Mizzi’s Panama companies before them?

Is it because they were naïve? I’m sorry. I don’t buy that. I don’t buy it that a seasoned and notoriously hard-nosed business family stumbles on a contract that required a start-up financing of almost €500,000,000 and falls into it entirely oblivious to its contents.

“We are mortified and shocked that links are being drawn between this project and the brutal assassination of Daphne Caruana Galizia,” they say. Whoever wrote that for them must first get fired for using the passive voice in a sentence transparently intended to project an image of genuine empathy and concern.

“Being drawn”. By who? By tinfoil hat conspiracy theorists? By aliens? By the loons that think Bill Gates invented covid to take over the world?

It’s the facts that we have known, as everyone has, for almost two years now that force those connections to be made. The only thing that’s different now is that the police have declared in court that they consider the Electrogas contract as the motive in the case they are bringing against Yorgen Fenech for the murder of Daphne Caruana Galizia.

This is a bit like the day Yorgen Fenech was arrested less than a year ago. Until they saw Yorgen Fenech arrested, many continued to believe Joseph Muscat was being maligned by Nazzjonalisti indannati who couldn’t stand living under a Labour government. But for some, the moment the police put handcuffs on the Fenech scion was the instant they realised Daphne was right.

That same shower of collective realisation sprayed out of the courtroom when Inspector Keith Arnaud told the magistrate hearing the evidence against Yorgen Fenech that they will be presenting evidence on the Electrogas deal in support of their murder case.

Throughout all this – the Panama Papers scandals, Daphne Caruana Galizia’s published investigations, Daphne’s assassination, the 17 Black revelations, Yorgen Fenech’s arrest – throughout all this, the Gasans (and Siemens, and SOCAR, and the Apap Bolognas, and the rest of the Fenech clan) sat in awkward silence hoping this story just goes away and that in spite of all the revelations their sweet, sweet, 18 year-long deal would remain in place making them money.

Until now the Gasans waited patiently for the story to blow over. Let’s please not indulge the bullshit that they haven’t drawn out profits from the deal yet. Even if that were true on a cash basis, the value of their share of the contract is theirs. “Seeking all avenues to exit” means they expect money in return for giving up their shares. So, it’s worth something to them. And in any case for as long as they stayed in, they fully expected handsome returns somewhere down the line in the 18-year contract. We may not be hardnosed descendants of multiple generations of tycoons, but most of us can search ‘rate of return’ on Wikipedia and get the general idea.

Now the Gasans no longer expect profits down the line. They have worked out the calculus that the Electrogas contract is not going to remain in place for the next 18 years; that the corruption of this deal cannot be credibly denied and its dissolution at some point is as inevitable as indigestion on Christmas. They’re cutting their losses, pitching their “small” 11.25% share of this poisoned apple pie, presumably to the remaining shareholders, particularly SOCAR who may be even now quite ambivalent about the reputational damaged caused by this deal.

When you’re the state-owned energy company of Azerbaijan, you do not worry unduly about your reputation. You will not miss the dwindling Christmas cards that must be eating the collective insides of the Gasans, as they perceive the increasing social ostracisation while more people decide they can no longer restrain their disgust and bury it under the morass of the pathological politeness of the Maltese microscopic social petri dish.

But if the Gasans do manage to quit this deal financially unharmed, we’ll still look at them for what they enabled, what they allowed to happen, what their pretend naivety allowed to occur: the daylight robbery of all energy subscribers in the country and the murder of the journalist who spoke on their behalf. All that while they counted down the days to a handsome return.

And we’ll look at the Apap Bolognas.

And we’ll look at the Fenechs who have the gall to waltz around Facebook waxing melodramatic about their poor baby boy Yorgen whom they seem to imagine is some latter-day young Nelson Mandela.

If this country is ever going to respect itself again these families will no longer own this town.

By the Gasan’s own account, they stayed silent for four years since the Panama Papers came out. I would tell them one thing: do not expect to start your march towards rehabilitation by getting a publicist to write the sort of press release you published today. “I didn’t know,” is no atonement.

We were in the streets every day fighting this. Where the fuck were you? 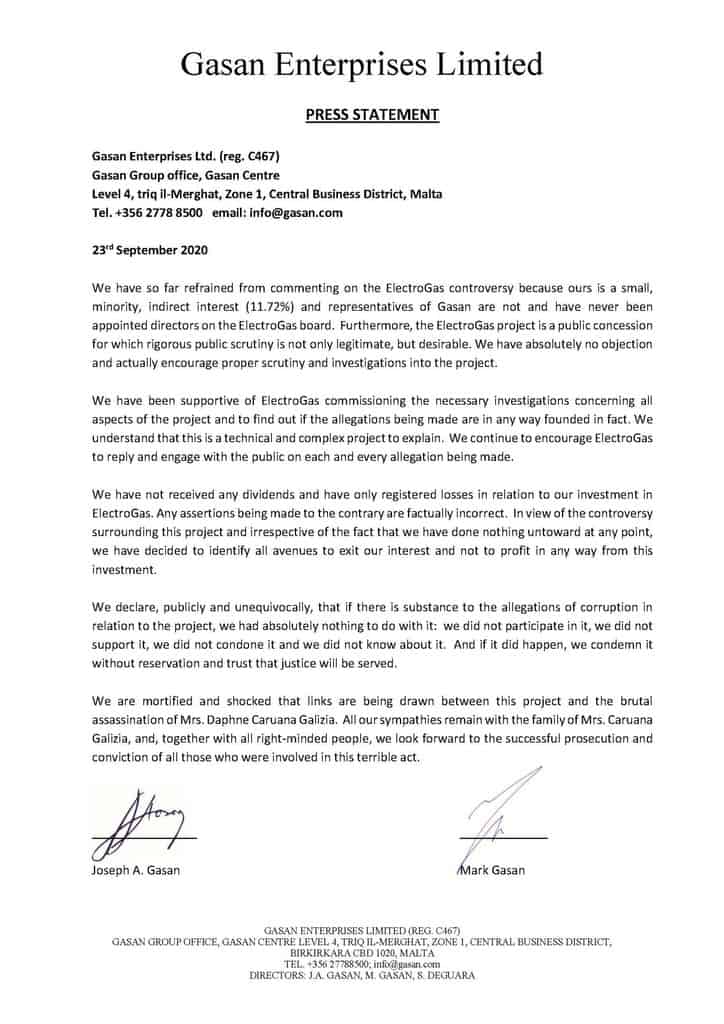