A proud man is always looking down on things and people; and, of course, as long as you are looking down, you cannot see something that is above you. – C.S. Lewis 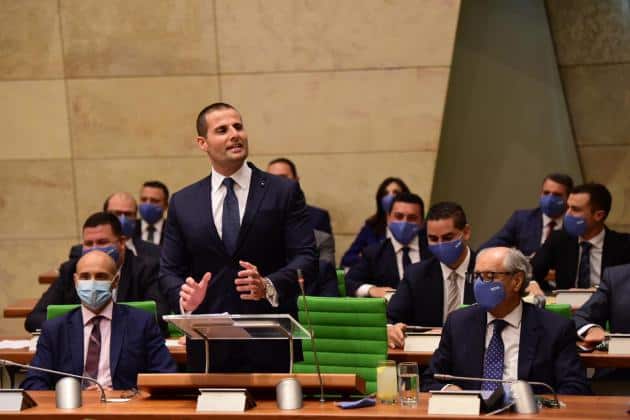 Robert Abela is proud to have suggested that the new Nationalist Party leader Bernard Grech is partially to blame for Malta’s woes with Moneyval because of the way he conducted his tax affairs over the years. “If we have a problem with Moneyval, then Bernard Grech, as well as Adrian Delia, are major contributors.” There it is. It is not about corruption, money laundering, kickbacks and about FIAU reports not being investigated. If Moneyval will grey-list Malta, the responsibility falls on Bernard Grech and Adrian Delia.

He said that government’s budget for 2021 was a generous one that continued to provide for the people even though the country was dealing with a pandemic. The prime minister said the budget not only looked at the immediate needs of the country but also looked ahead, as far as 10 years from now. In reply to Grech’s criticism that the budget was recycled, Abela said he was proud of this as good budgets will continue to be unveiled year after year.

Robert Abela defined his government as the best in the history of Malta. It was the government that had come up with a superlative budget. He said he was proud that his government had obtained the biggest financial package from the EU. He said that he managed to get €2.5 billion from the EU. But he stopped at that. Because it is a big fat lie. Robert Abela did not go into detail of his ‘biggest’ deal.

He did not mention that a sizeable part of the package has to be paid back because it is a loan under the Covid-19 recovery scheme. And that Malta’s contribution to the EU has more than doubled. Malta will now have to give back €1.2 billion to the EU as its contribution, which was €500 million in the 2014-2020 agreement. Malta will be getting a total of €590 millions against the €627 million it got for the 2014-2020 period. You sure should be proud Mr Prime Minister.

The Prime Minister is also proud of the IIP (the sale of passports) and said that the Opposition wants to “destroy” the scheme at all costs. Wrong again, Mr Prime Minister. It is the European Union that wants to stop the scheme and last week it launched infringement procedures against Malta and Cyprus over breaches of EU law following reports of sale of citizenship to suspicious people amongst them criminals. Laure Brillaud, Senior Anti-Money Laundering Policy Office of Transparency International said that “There is overwhelming evidence that the golden passports schemes of Cyprus and Malta have been serving corrupt interests, not the common good.” Proud of that too Mr Prime Minister?

But his greatest pride is that he was leading a government of good governance, subscribing to the rule of law in Malta.

Now that is gross, to say the least. Robert Abela is proud that his predecessor Joseph Muscat was named as the most corrupt person of 2019. He is proud that the former prime minister and two ministers resigned as did the former Police Commissioner, the former Attorney General and a host of other high government officials. He is proud of the collusion between high police officers and criminals.

Robert Abela forgot that a member of his cabinet was found guilty of breaching the constitution and he has 3 ministers under a criminal investigation.

He is also very proud that the MFSA chief Joe Cuschieri visited Las Vegas with the alleged mastermind of Daphne Caruana Galizia’s assassination, as did the former Assistant Police Commissioner to see a Champions League final. Robert Abela is proud to have been the lawyer of the infamous Maksars who are alleged to have provided the bomb that executed Daphne Caruana Galizia, as he is proud of giving a time limit for the public enquiry to be finalised.

Proudly he said that “when I was appointed prime minister, my priority was to keep the momentum of previous years going. Yes, there was political upheaval but within days of my appointment, we were back to normal”. Robert Abela is proud that Malta’s administration is in the hands of criminals.

Robert Abela is proud to have given direct orders for consultancy to Justyne Caruana amounting to €50,000 per annum as he is proud of the handing of a €500 million direct order to the DB Group and James Caterers for the extension of St Vincent De Paule home for the elderly.

The Prime Minister is also very proud for how he managed the coronavirus pandemic. “The pandemic caught some countries off guard, but we had a strong healthcare system,” he said. He is so proud that we only had a few deaths, not thousands as expected, and those who died all had underlying conditions. That is why he keeps repeating that everything is ‘under control’ and he is so proud of it.

Quoting Abela, “When I look into people’s eyes, I think to myself, how can I make this person’s life better? We want to try and help as many people as possible, especially those who need it most.” That is why he gave a raise of €1.75 every week as a cost of living increase. The government, Robert Abela said, was increasing investment because it had confidence in businesses, that is why he kept Kurt Farrugia on his €500 a day salary.

Then he started listing the foreign investment that happened through the hard work of the former communications officer for Joseph Muscat. The list is too long to write it here. Robert Abela gave Karl Stagno Navarra a €75,000 per annum contract with bankrupt Air Malta, with the aim of attracting more tourists because as Julia Farrugia Portelli said all “mechanisms are in place.”

Turning to Gozo, Abela said the second fibre-optic cable was being built soon to create more employment in Gozo for Gozitans. This is a cut and paste sentence from the last 3 Labour budgets, as are references to the fast ferry and the promise that all Gozitans will be working in Gozo.

Abela wrapped up his speech by saying he dreamt of a country where the environment was enjoyed and safeguarded for future generations. However, he failed to mention all the buildings in ODZ, the massacre of mature trees, the handing of vast land areas to hunters and the pollution that is wreaking havoc with people’s health.

Robert Abela, let me remind you what Carl Gustav Jung said: “Through pride we are ever deceiving ourselves. But deep down below the surface of the average conscience a still, small voice says to us, something is out of tune.”