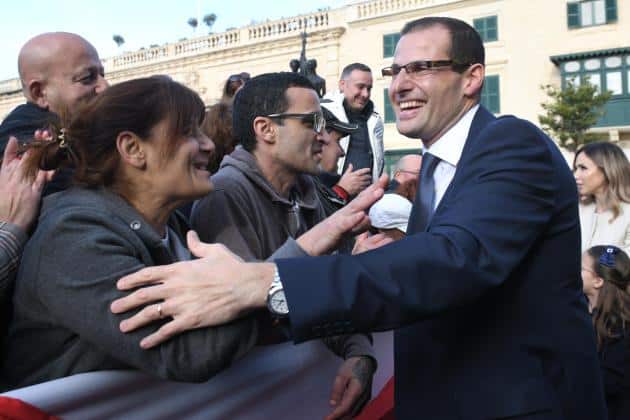 If you follow Michelle Muscat’s preferred media, my dear, you might think that Malta is the gold  standard for a democratic country where “institutions are working” because the new Attorney General moved against Keith Schembri, Brian Tonna and his cabal in Nexia BT, where the Accountancy Board stripped Tonna and Karl Cini of their warrants, where Joseph Muscat freely speaks to the media without scurrying through the back door, where the wife of the President of Malta, Mrs Miriam Vella stands shoulder-to-shoulder with Michelle Muscat at a charity drive, where the Prime Minister Robert Abela gaily sails his boat and speaks about his preferred ice cream flavour on the Labour Party TV station and where his daughter is paraded on the media on her first day of school.

You can almost hear the violins play and the lambs gambolling on verdant pastures. Goebbels would be so proud.

If you follow Michelle Muscat’s preferred media, my dear, you will also see the Prime Minister’s and the Minister of Justice’s twitter feed ablaze with self-congratulatory tweets such as these following the publication of the first ever Annual Report on the Rule of Law situation across the European Union on the 30 September 2020.

While some are ashamed to be #Maltese, @POLITICOEurope names #Malta as an example of best practice after #Commissioner Reynders lauds our considerable #progress and the real evolution of #institutional #reforms in 2020. – RA

The @EU_Commission certifies the significant historic reforms undertaken recently to strengthen rule of law and governance further indicating Malta as a ‘best practice’. We are committed to go on with more reforms to further reinforce our democratic and institutional framework pic.twitter.com/5IgXj5s1I9

But those who follow independent journalism know that all the above is spin so beloved of the Labour Party. Schembri, Tonna, et fellow crooks were arrested four years too late, their warrants stripped by a reluctant Accountancy Board four years too late while its chief Peter Baldacchino boasts in court that “his conscience is clear” as if that absolves him for sitting on his hands.

Michelle Muscat acts as though her husband, the disgraced former prime minister Joseph Muscat isn’t neck deep in serious allegations of corruption and conspiracy in the state-assassination of his most vocal critic, Daphne Caruana Galizia. Instead she regales us by parading her ill-gotten designer togs and bling while preaching to us about charity.

Those who follow real journalism know that the Report on the Rule of Law did not exonerate Malta from its failings and chalked down any reforms as a result of relentless pressure from the European Union and the direct intervention of the Venice Commission. “But also due to more and more pressure coming from civil society.”

So Abela and Zammit Lewis waving this Report like others wave their Form II report is misguided and premature.

In fact, true to form, Pieter Omtzigt would have none of it. After all, he is used to Joseph Muscat’s doublespeak and can also spot it in the Continuity Government of Robert Abela. He called Zammit Lewis out for twisting the facts with a succinct tweet:

Curious to know where he read this. Malta was frequently mentioned in the EU rule of law report but never with the adjective ‘best practice’

“Curious to know where he read this. Malta was frequently mentioned in the EU rule of law report but never with the adjective ‘best practice,” Omtzigt wrote dryly.

The stark truth is that Malta topped the list of European countries where the rule of law is under attack. We must cut Abela some slack though, they’re so used to the ‘Best in Europe’ mantra that he got a pavlovian reaction to Malta topping this list, and took to Twitter in Trumpian blowhard fashion. But let’s concede that when Robert Abela speaks, he’s addressing a select audience: his party faithful. Not for them this excellent dissection by The Shift News of what the report really said and what Abela and Zammit Lewis are doing their best to spin. Anna Pavlova would have been happy to have them both in her corps de ballet.

Our intrepid Prime Minister, though, ignored another list on the same day. On the 30 September, Malta hit the top spot of Covid-19 deaths in Europe. But these deaths can be ignored by Abela because after all, the elderly victims all had “underlying conditions”. This is the new Labour mantra.

For the “underlying condition” of the Covid deaths is bad governance. Bad governance is not only centralised around corruption for according to a widely-accepted definition by the World Bank, bad governance also includes lack of transparency and accountability, arbitrary policy making and the cheating of those who are governed.

There are no two ways about it. Robert Abela has bungled his own government’s Covid-19 strategy by looking at short-term economic gains to the detriment of our nation’s health. At the end of August, he boasted that “Our Coronavirus Numbers Show That Our Strategy Works” attributing the rise of infections to increased testing conveniently forgetting that his government caved to the pressure of big business lobbies and installed faulty ‘mechanisms’ courtesy of his Minister of Tourism Julia Farrugia Portelli. The MHRA chief, Tony Zahra, God bless his silk socks, is now pushing for ‘free flights’ to boost his line of work.

This tone-deaf announcement was made on the, wait for it, the same date that Malta registered the highest Covid-19 deaths in Europe because in his words “our strategy is to try and make Malta be perceived as a safe destination.”

We still have to see whether his willing poodles Abela and Farrugia Portelli will, once again, give him what he is asking for. What are the odds that they are seriously thinking about it?

The elderly are not the only victims of the government’s mishandling of the pandemic. Pupils and students, especially those in state schools, have borne the brunt of the hapless and hopeless Minister for Education, Owen Bonnici’s mismanagement of his portfolio. By using the prime minister’s daughter’s first day of school (an independent one, mind), the government is painting a pretty picture that all is well, that our children’s education is in a safe pair of hands. But the opposite is the case. But then the Honourable Minister is used to violating fundamental human rights with aplomb.

On balance, it’s been a good couple of days for Robert Abela’s government. It takes quite a good dose of bad leadership to top two lists on the same date.