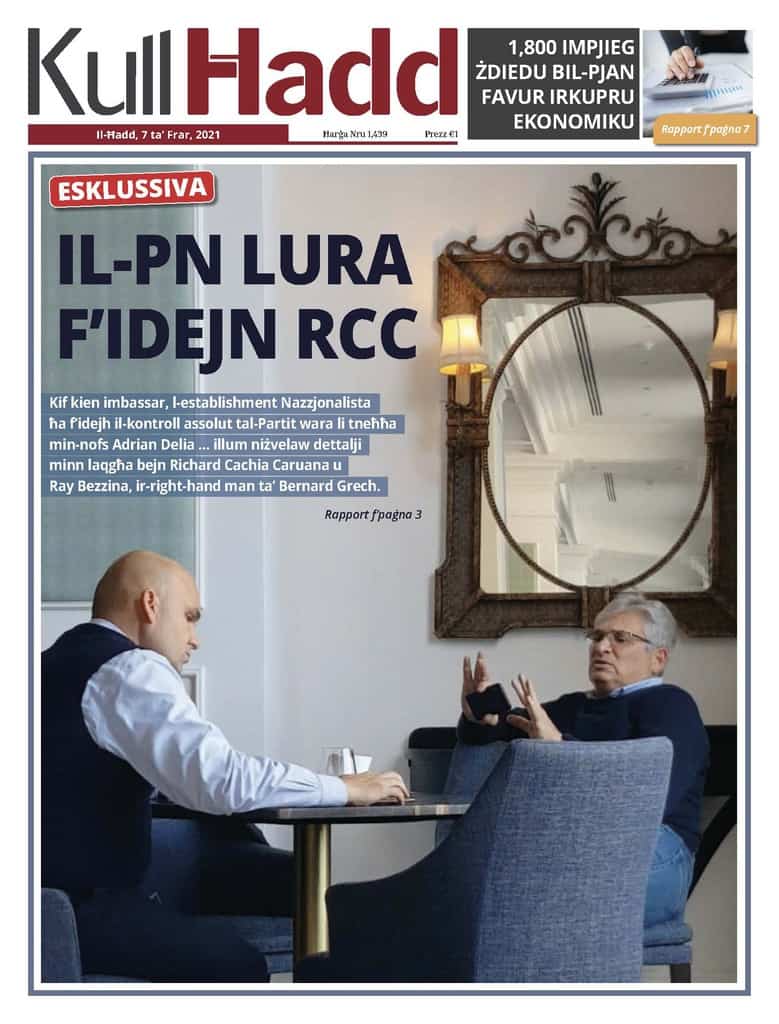 In the past days, Labour Party media channels and subservient others reported as if it were a journalistic scoop, a meeting between Ray Bezzina, a Nationalist Party functionary, and Richard Cachia Caruana. The latter’s very long service to the country and the Nationalist Party has earned him respect from those who value his political mastery and scorn from those who found themselves at the receiving end of his decisions. Such is the destiny of high-ranking, long-serving political operatives.

Before further comment, I hold no brief on this matter for the Nationalist Party, its administration, Ray Bezzina or Richard Cachia Caruana but I am intrigued by this red herring report.

I am quite sure that both Bezzina and Richard Cachia Caruana have a busy schedule. So why has the Labour Party chosen to pick on this particular meeting?

First, had it been a secret meeting, cloak-and-dagger style as it was portrayed to be, then both people would have surely been more careful to choose a meeting place away from the public eye. The fact they haven’t, puts to bed straight away both the element of secrecy and that of a covert operation.

The “journalistic scoop” then proceeds to portray a spy-camera filming operation, to add more drama and suspense to the “secret plot”. They have carried countless stories of this type for twenty odd years, repeatedly informing the nation that Richard Cachia Caruana at times holds meetings at a particular hotel lobby bar. Nothing newsworthy here, Super One news has told us this several times before.

Now let’s look at the same news report from a different angle: the standing of former Chiefs of Staff at the Office of the Prime Minister. None of the former Heads of Secretariat serving former Nationalist Prime Ministers find themselves kicked out of their own party, have colluded (as a minimum) with criminals or placed under investigation. None of them has anything to be ashamed of. None of them engaged in criminal acts that undermine the State. Can the Labour Party say the same about its former Chiefs of Staff?

The answer is no, of course, and emphatically so because Keith Schembri has left a trail of damage and a long shadow on Malta’s reputation and institutions.

Thus, I fail to see why any former Nationalist Chief of Staff should be forced to hide, or for that matter, why any party official or functionary should refuse meetings with these people for any reason whatsoever. Labour, on the other hand, is forced to keep away from its own.

Having unravelled the mystery plot, one should also seek to understand Labour’s real motive. For no Labour-voter would be bothered by any meeting that Richard Cachia Caruana or Ray Bezzina may have had.

Labour knows that within the Nationalist Party, Richard Cachia Caruana is as liked as much as he is disliked. Labour rolled out its old and tired ploy to pit a high profile, old-time controversial PN mastermind of times gone by with other Nationalist bedfellows of today.

It was not an attempt to directly gain points but mostly a ‘divide and rule’ approach to drive a wedge and fracture its political adversary.

The Labour Party thought that inflating a non-event, as this meeting is, into a reminiscence of a perceived chokehold on the Nationalist Party by a former Chief of Staff, “blowing his cover” and “uncovering” his “return” on matters of strategy, may push a button or two in the minds of certain Nationalists who feel uneasy at the sight of this person walking into the Dar Ċentrali.

There is more than meets the eye and by engaging in such distorted reportage, Labour is inadvertently giving away its preoccupation and uneasiness with a reinvigorated opposition.

Former Labour Prime Minister Alfred Sant has recently taken to Twitter: “One needs to watch out against complacency of any sort vis a vis the Opposition …” he said.

Using Labour’s own perverse yardstick, Alfred Sant is part of a clan to publicly diminish Robert Abela as payback for his father’s opposing views during Sant’s premiership.

Expect the coming months to offer more trash theories of this sort in the run-up to the general election. For in politics, like in life, perception is reality.

Previous:The Nationalist Party too is accountable
Next:THE SUNDAY TIMES: Let’s all come together