Note to Bernard Grech: if resignations were enough, Joseph Muscat could retire in peace. They’re not enough.

Bernard Grech got the Jacob Borg treatment at a policy event of the PN today. He looked like he was expecting it but prepping a pocket smile, a clear brow, and an approachable tone is only half the job. The other half is actually saying the right thing.

Praising Pierre Portelli for resigning after news reports he planted stories against his own party on the opposition’s media is misguided. Certainly, an admission of guilt should be considered when passing sentence but it’s not like we got one in this case. Pierre Portelli has assumed zero responsibility. All he said was he didn’t want his critics to damage the party, not that he feels he’s done anything wrong.

So what, we’re supposed to shut up now?

Why should we shut up about unacceptable proximity between the PN and Yorgen Fenech, and chase the Labour Party for it? Because the consequences of Labour’s actions were worse? They were. Much. But that’s hardly reassuring. Labour was and is in government. The consequences of corruption within its ranks are bound to be proportionate to the power that it wields.

But if we are expected to replace Labour with the PN, we are entitled to expect that this sort of hanky-panky stops.

It won’t stop with a resignation. We can only begin to hope the PN has addressed its past flirtation with corruption and its association with Yorgen Fenech, if we see it work hard to uncover it, to eradicate it and to express some form of regret to the public and a commitment to turn the page.

Instead, Bernard Grech looks like he’d rather behave as if there wasn’t that page.

Why? All in the interests of party unity, of coming together. Where have I heard that before? Ah yes, I remember now. Adrian Delia’s thugs – Pierre Portelli first and foremost – used to insist no one criticises the conduct of the PN and its leadership in the interest of party unity.

It didn’t work then. It won’t work now.

Out here there are a few citizens who do not measure their opinions by “love of party” like Bernard Grech measured Pierre Portelli’s today. We measure our opinions according to right or wrong. 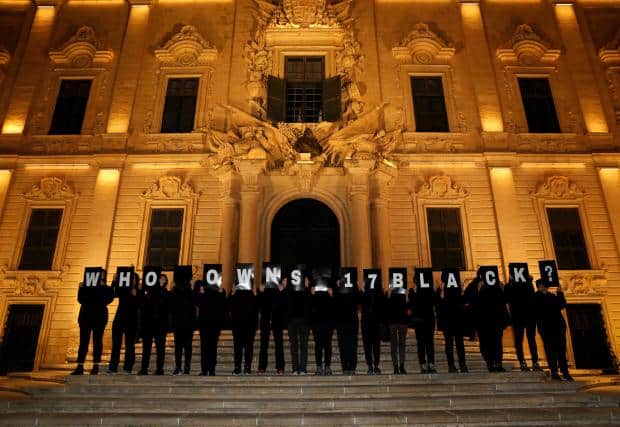 And there’s no universe in which we can imagine existing where it is right for the PN to keep up a close relationship with Yorgen Fenech after the 17 Black exposures. While some of us froze our asses off holding up banners rhetorically asking ‘who owns 17 black’ to try to get the institutions to answer that question, and even after it was answered thanks to journalists of conscience, the PN’s leadership was conspiring with Yorgen Fenech to harm and politically eliminate its own MPs and MEPs. Not to mention the civil society activists freezing their asses off.

That’s apart from the “allegations”, as Bernard Grech called them as if that word meant “lies”, that the PN or individuals in its leadership, collected money from Yorgen Fenech, including money to pursue political ends such as the elimination of David Casa from the MEP race to plant a favourite of Yorgen Fenech and the Labour Party instead.

Here are some clues, Bernard Grech.

The “allegations” you’re dismissing have exactly the same source as the ones Pierre Portelli resigned over. They are not merely credible. They are true. You can act now on the back of what you know, or wait until the evidence is concretised in open court and you’re too close to a general election to do anything about them.

Next. If you’re going to act on revelations about misconduct within your quarters only after “allegations are proven”, you’re going to have to explain why you decided to challenge Adrian Delia for the leadership. Adrian Delia’s legalistic position when his party forced a leadership election on him was that the stuff about Soho, and about Yorgen Fenech, and about his debts and all the rest of it, were only “allegations”. They were. But the counter argument was that the allegations were credible and he wasn’t. So no political party could afford to wait for the allegations to turn into something else before they fire the party leader dragging them down.

The judgement we’re making out here is not whether the “allegation” that the PN leadership cavorted and conspired with Yorgen Fenech after he was outed as the owner of 17 Black has been proven in front of a trial of Adrian Delia’s peers. This is not the trial of Adrian Delia (though that may happen yet). The judgement we’re making out here is whether Bernard Grech’s party would behave any differently if like Joseph Muscat in 2016 it was to face “allegations” in a blog post by someone Daphne Caruana Galizia saying they had bank accounts in Panama.

Without having to suspect malice or complicity in Bernard Grech, which we suspected in Joseph Muscat, we can still judge the outcome and, I’m sorry to say, Bernard Grech’s smiling defence of his party was no better than Joseph Muscat’s deep furrows between those glass Dr Mengele eyes.

I’ll take a page from #occupyjustice here. We demand better than this.