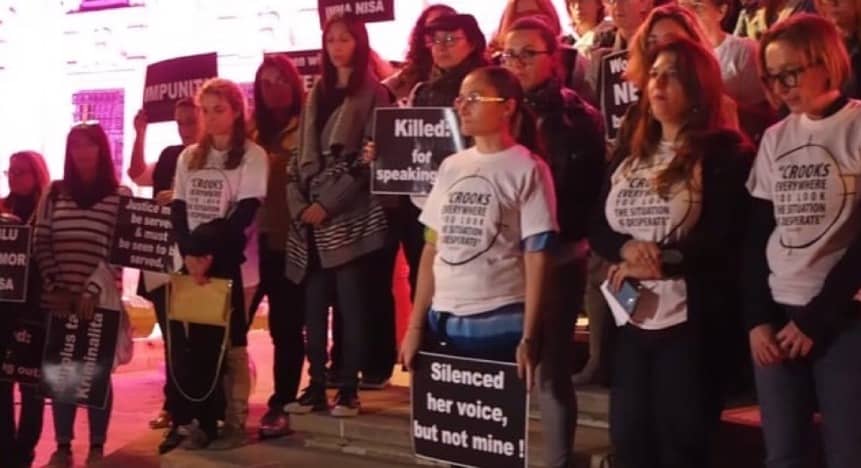 Four years ago today, about 100 women stood on the steps of Castille protesting the evident indifference, if not hostility, of the country’s institutions ten days after Daphne Caruana Galizia had been killed. They would tag their protest on social media #occupyjustice.

Daphne’s assassination happened on a Monday. A week later Parliament was due to meet to continue its budget debate but as proceedings started, Leader of Opposition Adrian Delia stood and asked for Parliament to drop its pre-planned agenda and use the day to discuss Daphne’s killing. Parliament’s Speaker Anġlu Farrugia asked what the government had to say about that. The government disagreed and the Speaker decided the matter was not urgent as such. So, on Parliament went to speak about cabbages and kings instead.

My wife, impatient with ceremony and protocol on good days, asked me on the phone what I made of what had happened. I put on my mansplaining hat examining the narrow definition of “urgent” in Parliament’s Standing Orders and such esoteric drivel. My wife characteristically cut that crap off. Also characteristically, she made a biting and devastatingly accurate point. Why have a Parliament at all if it can’t force a government to speak about the killing of a journalist the first time it meets after the event? None.

As she said this, her plane was about to take off. She was on her way to a medical-trip and was forced to switch off. She was due back Thursday afternoon. The first call after the plane touched down on her way out was not to me but to Pia Zammit a friend of hers that would become mine too in due course. They rounded up their mates and they met on the steps on Castille that Thursday night.

“Occupy” was borrowed from the left faction in American politics “Occupy Democrats” who used demonstrations, picketing and civil disobedience in opposition to social and economic inequalities. Quickly, “occupy” protests spread worldwide. Some have counted “occupy” actions in 951 cities across 82 countries. The first ‘occupation’ was of Zuccotti Park in Manhattan for “Occupy Wall Street”. The protesters wanted to push out the bankers from their home.

“Occupy Castille” was a first draft to identify the movement that had just been born in Valletta. It would not have worked. It would have sounded like a coup. People should get elected to Castille. It just so happened in 2017 that a bunch of crooks had been elected to Castille running an office where murderers were paid salaries for phantom jobs, the erection of massive towers was enabled after chats with corrupt businessmen, Panama companies were set-up to organise bribery, and a journalist was discredited and isolated in a systemic campaign that enabled her murder.

The killers were occupying Castille. Sitting on their doorstep protesters wanted to occupy justice.

The people from the inside did not take it well. Although a journalist had been killed just 10 days earlier aided by the hate campaign they had ran and managed for years, the bosses in Castille seemed disturbed to learn that anyone would be bothered about the matter so long after. Ten sleeps should have been enough for everyone to forget.

In the same way the Leader of Opposition sheepishly sat back down that previous Monday when he was told that the killing of a journalist was not important enough to redirect Parliamentary proceedings, they fully expected the entire population to lose interest in no time. 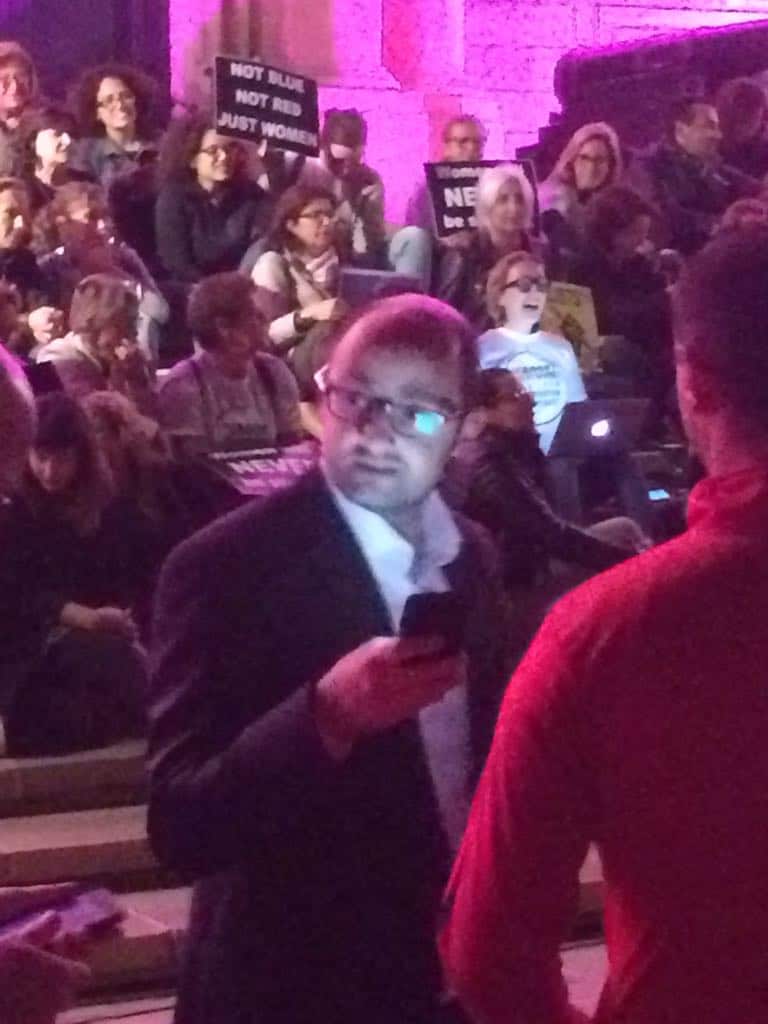 Matthew Carbone, at the time number 2, now chief government spin doctor, visited the protesters to see what was happening for himself. That’s the extent of their surprise. Mobile phone in hand he snapped photos of protesters. He may or may not have meant to check later who the protesters were and how he could organise appropriate retribution or perhaps intimidation to prevent them repeating the stunt.

His actions definitely had the effect of making people wonder what the government wanted with their photo just because they were protesting against it. On the night I compared that behaviour with the conduct of terrorists, less interest in the hurt caused by their actions than in the consequential fear caused in others. That remark I had made would be used against me many times.

Most of the 100 women that night did not go home. They stayed outside Castille until Sunday afternoon when they were joined by thousands in one of a series of protests.

That Thursday night they pitched the tents they would sleep in and camped in Castille Place. Daphne’s sons, Matthew, Andrew, and Paul ordered some pizza delivered to the protesters. On the top they stuck a note thanking protesters for their support and they attached a sheaf of leaves shorn from a bay laurel bush in their mother’s garden. The bay laurel would become the symbol of the campaign to call for justice for Daphne. 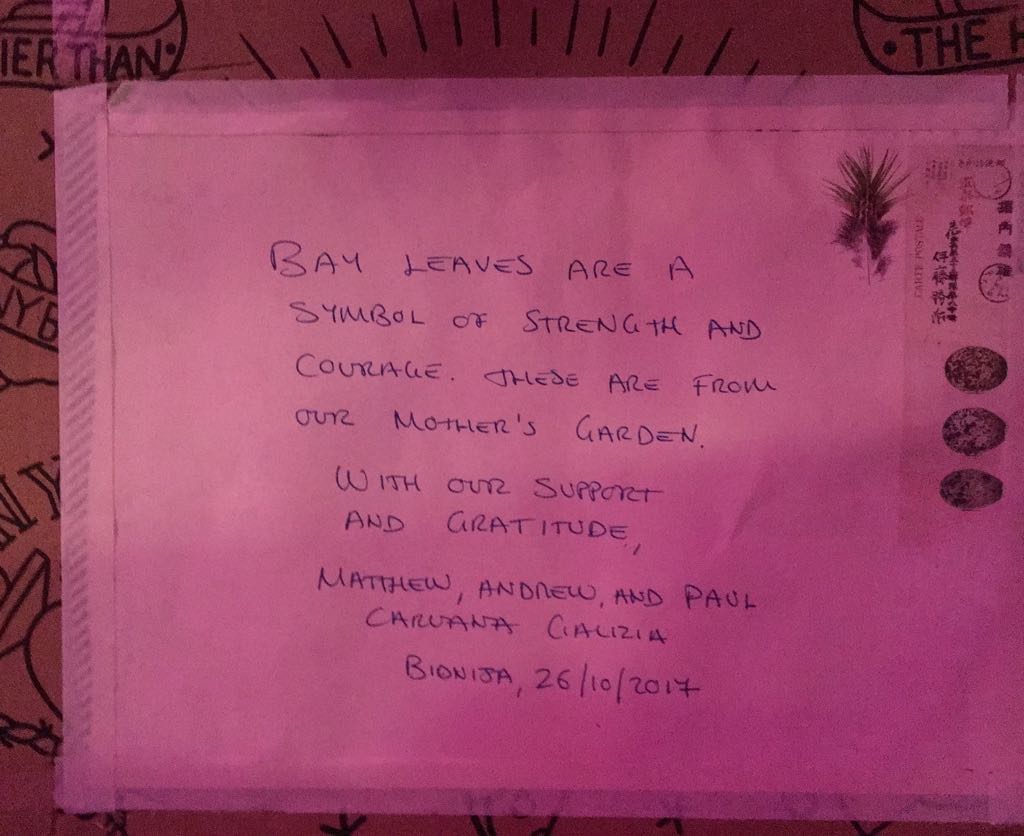 My daughter was all of 7 years old at the time. She shared a tent with her mother, her way of expressing her indignation at what had just happened. She had not heard of Daphne before she heard she had been killed. She was not going to let an opportunity pass to tell the powerful who allowed Daphne to die or who had had a hand in killing her what she thought of them. 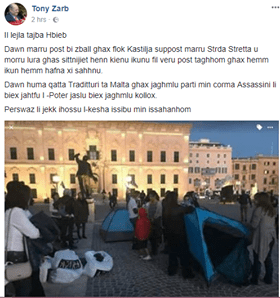 That evening, Tony Zarb awarded the label of whore to my wife, my daughter, and 100 women I did not know who pitched tents outside Castille to tell the prime minister who led a government that allowed a journalist to be killed that they disapproved of his conduct. Zarb, and hundreds of others who chimed in on his Facebook account to express their agreement, said the women should have pitched their tents in Strait Street circa 1960 instead of the hallowed ground Joseph Muscat walked on every day.

Three days later, Joseph Muscat had not yet distanced himself from the way Tony Zarb had spoken of protesters. The Prime Minister was doorstepped by some reporters that Sunday and said he did not approve of what Tony Zarb had said. And then he proceed to condemn Manuel Delia for criticising Matthew Carbone’s intimidatory behaviour that Thursday evening.

False equivalencies would continue to be one of the most frequently used pivoting tactics of Joseph Muscat then fully intending to survive any pesky fall-out from allowing a journalist to be killed.

Another tactic would be revolting sarcasm and hurtful innuendo. Joseph Muscat told the protesters that Daphne’s killing “would blow up in their face” in a metaphor that was less explosively inappropriate and more violently cruel.

In spite of Joseph Muscat’s hopes for his unvanquishable future, Occupy Justice would outlast him. That day they were founded, 4 years ago today, they made their first statement: a brief, sharp, incisive manifesto they drew up after Parliament, whose job it is to lead us in good times and bad, not only struggled to find words appropriate for the tragedy that had befallen the country but didn’t think it had been urgent enough to try. 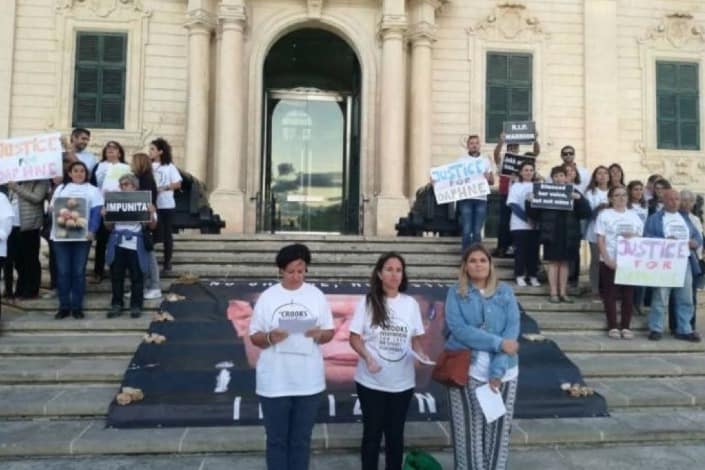 Occupy Justice closed their first statement with the words that would conclude their every utterance since then. 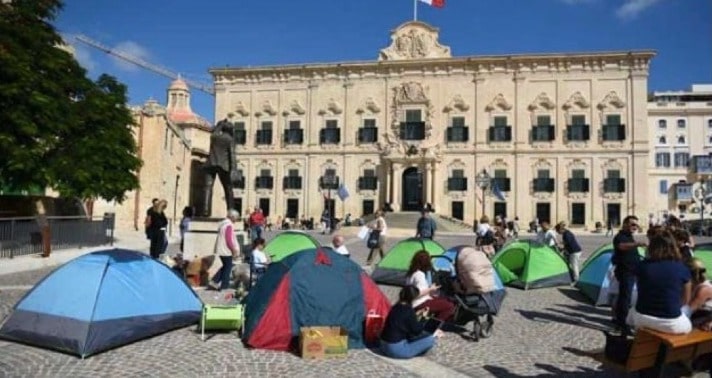 Previous:Gaming CEOs warn “impossible to do business in Malta” if still grey-listed after a year
Next:It would be ok if Anna Mallia was just a troll. The problem is she’s an idiot.