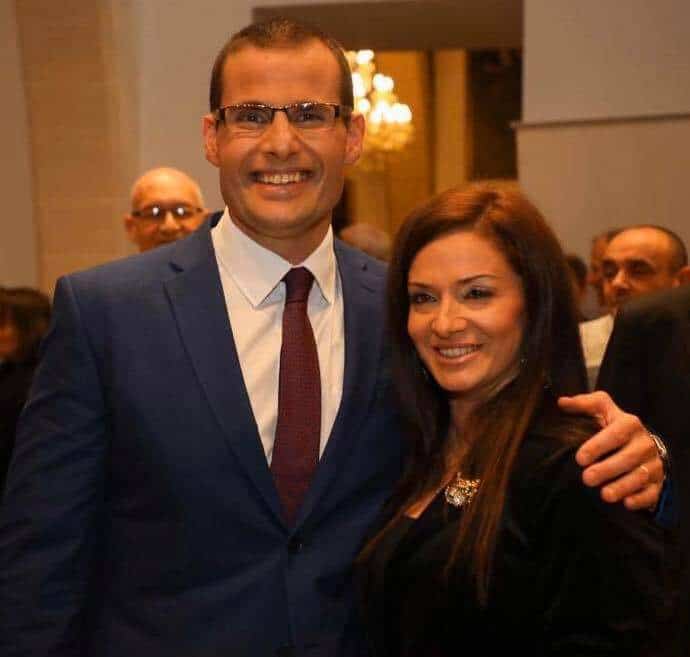 Labour’s TV two nights ago said that a conspiracy of “the establishment” to take power from the Labour Party was being hatched on the doorstep of the police headquarters. The “evidence” of this conspiracy was a photo where a priest, a journalist, an Opposition MP, and activists from Repubblika were found to be within the same 10 square metres. From there, Labour’s mouthpiece Karl Stagno Navarra said he could see a conspiracy of the establishment composed of the Nationalist Party, “the media”, “the church”, and Repubblika.

There was some backlash after that report not least because just last week the government was promising international press freedom NGOs and two senior delegations from the Council of Europe that Robert Abela is being nice to journalists.

Understandably one of the complainers was the journalist concerned. Tim Diacono, Lovin Malta’s political editor, was in Floriana to cover the protest as a journalist. He expressed no particular sympathy to the cause of encouraging the police to act on Konrad Mizzi’s crime. His presence could not be interpreted as an endorsement. When One TV are present at a Repubblika event, mostly to harass participants, they express no desire to endorse the proceedings.

That’s good. When journalists are identified and targeted by One TV their job becomes impossible. They are reduced to figures of hate, heckled in the street, prevented from doing the work they need to do to let us know what’s happening in the country. If One TV has finally been made to learn the lesson that it needs to keep its hands off journalists we have made some progress.

But there’s something deeply troubling in the implicit approval the prime minister gave to One TV’s false accusation that there exists a three-pronged (rather than a four-pronged) establishment conspiracy and that, therefore, the church, Repubblika, and the PN are looking to unlawfully or forcefully capture power.

By only condemning the reference to Tim Diacono, Robert Abela implicitly suggested that the poor reporter was caught covering a Satanic coven mistakenly presumed to be a Satanist himself. The journalist is rubbed out of the picture, but the rest of it remains evidence of horrific sedition.

Yesterday’s “condemnation” from the prime minister, Miriam Dalli’s echoing of it, and Karl Stagno Navarra’s “apology” address none of the basic issues with what One TV did this week. It filmed and photographed a peaceful protest outside police headquarters making no reference in its reporting to what the protest was about.

There was no mention of Konrad Mizzi, no mention of the 5-year-old evidence of corruption he’s involved in and all the other reasons why he should be prosecuted that, ironically, were also the reasons why the Labour Party kicked him out of its Parliamentary group.

The protest instead was attributed to a very simple motivation. The desire of “nazzjonalisti” to grasp power from the Labour Party, an act of sedition and an undermining of democracy that, if it had been true, deserves condemnation.

Protesting peacefully against the policies or actions (or lack of either) of a government in office implies respecting the right of that government to be in office and is in and of itself the reasonable demand that while in office the government does its job.

Protesters tell governments what you’re doing here or what you’re not doing, is not right and we’ll not stand for it. We’ll go out of our way (out of our beds on cold and windy nights in the case of this protest in particular) to let you know what we think. You can listen to what we’re saying, see the right way, do it, and we’ll go home. Or you can ignore us and we’ll stay.

Labour this week took up neither of those two options. Instead, it used its TV station to accuse protesters of sedition and identifying them as figures of hate. The prime minister has not condemned this. Miriam Dalli has not condemned this, although she was physically present in the room when Karl Stagno Navarra did it and if she had any decency left in her she would have either retched in disgust or shouted the man down on live TV. Karl Stagno Navarra has not apologised for it. And they did not condemn or apologise even as they condemned and apologised a portion of that same coverage that proved inconvenient for them, thereby endorsing and reaffirming their assault on civil society.

This works. I uploaded yesterday as an eloquent illustration of how One TV’s propaganda is then popularised by people who describe themselves as Laburisti. The guy “Michael” is not representative of all the people who choose to vote for the Labour Party. But he’s representative of some of them, like the ones that throw things at protesters as they drive by in Floriana.

“Michael” never met Repubblika. He has never engaged with anyone of its members, never attended any of its events, never allowed his thoughts to co-exist with any space in the universe occupied by Repubblika because, clearly, he feels he would be contaminated with some terminal disease. His experience of Repubblika is through what One TV and Karl Stagno Navarra say of it.

And this is his judgement. (Watch this brief extract. For his entire unedited speech go to this page).

Should this matter? For as long as we’re still walking around, maybe not. But I’ll give you this other extract from “Michael”’s diatribe where he speaks about his views today on Daphne Caruana Galizia. I warn you this is unpleasant and I feel queasy about helping “Michael” disseminate his evil opinions. I do this in the interests of the argument I am making.

I have no doubt that “Michael” has never engaged with Daphne Caruana Galizia, almost certainly never read anything she ever wrote, and his appreciation of her existence is entirely filtered through what One TV fed him.

In condemning what Karl Stagno Navarra had said about Tim Diacono, Robert Abela may have unwittingly betrayed a dim understanding of what the Daphne Caruana Galizia inquiry found: that hate campaigns against journalists put their lives at risks. If it is true that he has finally appreciated this, our country is better for it.

But it is a truly dim understanding if that logic stops at press card holders and that the season remains open to shoot on dissenters of any other form with the false accusation that they are traitors and seditionists or an establishment conspiracy seeking to deny the people the government they choose to elect.

Today marks 99 years since Mussolini marched on Rome and fascism became the supreme creed that rules Italy, and eventually other sophisticated, formerly democratic countries with a tradition of pluralist opinion and freedom of expression. We often fail to recognise the warnings of fascism because we see it through the fog of knowledge of what happened after fascism took over. 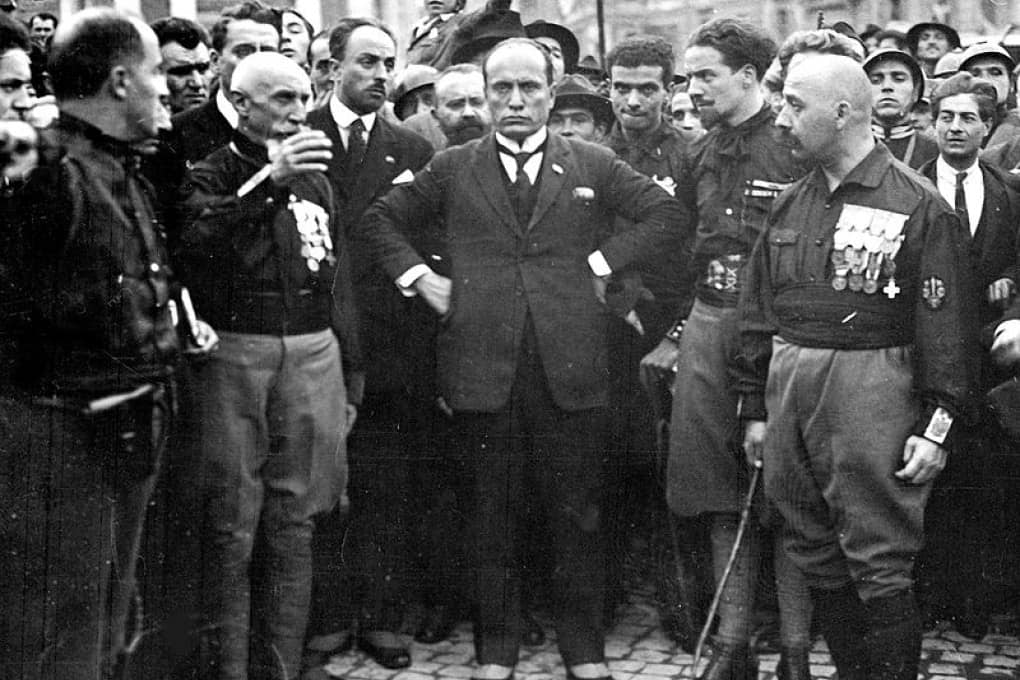 That’s not what we should be doing. We should be looking at what happened on its way up. Fascism rises out of democracy and it requires the democratic environment to thrive like mushrooms need the dampness of a very living tree trunk. They use propaganda to invent enemies, target them, isolate them, and overwhelm them. They conjur perceived threats, inflame fear of them, and then scapegoat them.

And they intimidate anyone from associating with those threats who will stay away whatever their views. 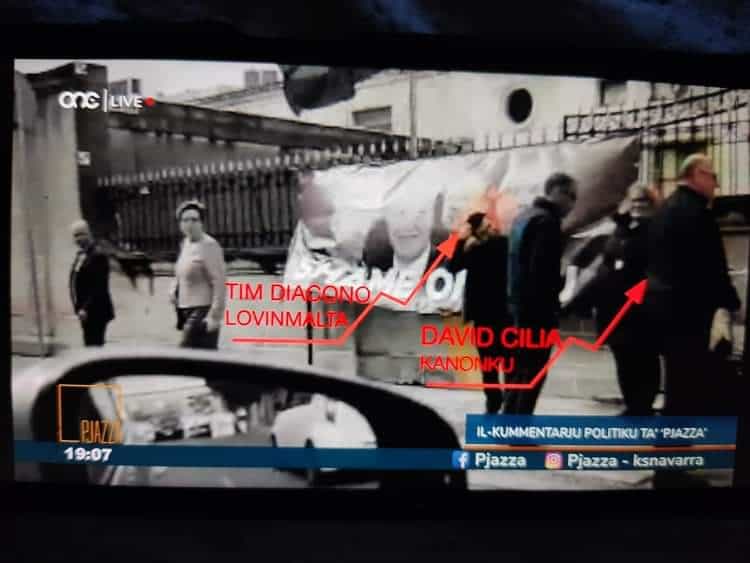 In this specific episode, for example, One TV entirely falsely accused the church of conspiring to undermine the authority of the government. They’ve been for some time targeting Archbishop Charles Scicluna who they feel must be undermined, discredited, and isolated because he speaks his mind and if Labour wants a fascistic monopoly on opinion, a free thinker is intolerable.

That was no accident on One TV this week. It was an opportunity which Karl Stagno Navarra took and Robert Abela pointedly refused to denounce.

I speak about the reference to the priest because even in our defence as activists and protesters we know that many buy the assumption that we deserve all the shit we get from the government through its media.

One word “Michael” uses a lot in his speech to the masses is “provocation”. He speaks of protests as a provocation that justifies the violence and retribution protesters surely must expect from rightly indignant Laburisti. For him, the current treatment Repubblika activists get is far short of what they provoke. He accuses Robert Abela and the Labour Party of being too weak in their tolerance of protest. They should crush us and sweep us away. If they won’t, he says, he will, the day after the Labour Party wins the next elections again.

That’s the final element in the rise of fascism that I wanted to highlight. With their deceit, their propaganda, their false accusations against imaginary enemies, and the mobilisation of their resources to isolate, harm, and eliminate dissidents, fascists unleash a monster. That is the monster of private initiative, of personal vindictiveness by supporters of the party who believe they are acting heroically and in the interests of their party, even to a point that the party itself fails to appreciate.

“Michael”’s hatred, when angry enough, will not be bottled by the Labour Party. Robert Abela could force Karl Stagno Navarra to apologise for something because Lord Haw-Haw will fall on his sword for his employer. “Michael” will not be controlled.

Like those people who went on Facebook to publicly imagine bloody ways of killing protesters, any police action against them will be perceived as inconsistent with the propaganda their party has spewed out. If these are enemies of the people why should anyone be punished for threatening to kill them? Certainly “Michael” doesn’t seem to think anyone deserves punishment for having killed Daphne Caruana Galizia. Labour’s propaganda has convinced him that she deserved to die and just because Labour has now changed that record, he’s not going to change his.

Fascists win democratic elections. A lot of pain, many forbidden protests, much propaganda and intimidation, and fear, and blood, will be needed before the fascists themselves live to regret it.

But to win, fascists need you to shut up.

Previous:GUEST POST: Stand up and be counted
Next:Tonight’s protest in Valletta