A California Senator, an ancient Greek dramatist, a Chinese military strategist, and several others have been credited with coining the phrase ‘the first casualty of war is truth’. Which is ironic.

What’s more ironic is that here in Malta by the time war breaks out truth is long dead. No mourning for sincerity here.

The official official story is the one issued by the “Department of Information” which is our version of an Orwellian Ministry of Truth, complete with wry designation.

“In his remarks, he referred to how the Maltese people’s resilience defined the future of the Mediterranean during the Second World War.” That’s all they say he said.

You read that and you see what Maltese people seem ever so keen to experience, foreigners praising us. Like all countries who have emerged from the 19th century immersed in an elite’s definition of our exceptionalism, our unique eligibility to the land we inhabit, and our world-beating heritage and pedigree of inimitable historical heroism and congenital courage, Malta has a view of its own history that has served the political purpose of decolonisation. But here’s the rub, we have not quite emerged from the 19th century yet. We still think God has made the entire universe to create a context for the real and exclusive purpose of creation: us.

Of all the things Zelensky told Malta’s Parliament, the DOI stops at his praise of Malta’s resilience during the Second World War. The man took an hour out of fighting a war to tell us how great our grandparents and great grandparents were. There’s no mention of why he spoke about that. There’s no mention of anything else. That way we can all be satisfied that like popes and kings, even presidents fighting defensive wars cannot help but remark how fabulous we are.

Consider now the semi-official story reported by the self-described journalists working at the national broadcaster. The report is signed by TVM’s editor herself, Norma Saliba, so this is as official as it gets.

Just look at this title. 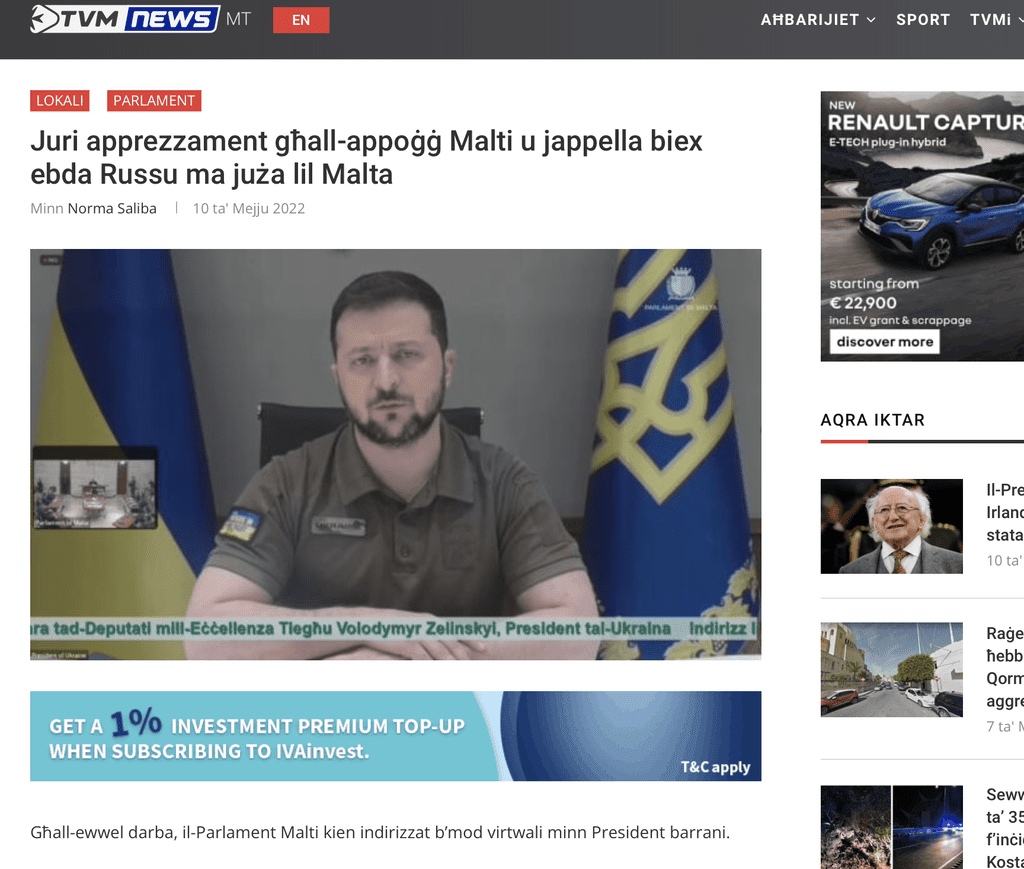 The first clause “juri apprazzemant għall-appoġġ Malti” is the classic, look how amazing the Maltese are. Even though what he was really saying there was ‘hey, thanks for the jam doughnut but it’s not going to help me when I’m shooting an enemy tank.’

And then the second half is just a flat out lie. Zelensky “appeals for no Russian to use Malta” which is written in a way that takes us out entirely of the equation. Anyone reading this will take it to mean that bad Russians are “using” Malta (whatever that means) and they should stop doing so. It is the Russians whom Zelensky is here misreported to have made his appeal to, not us. Because if he made an appeal to us that would mean we are less than perfect, and we can’t countenance that now, can we?

It’s not just the title. There is no reference at all in TVM’s report to Maltese passports sold to Russians. Stripped of its meaning, Zelensky is made to have said the opposite of what he intended.

Volodymyr Zelensky is used to this treatment. Russian official propaganda has been twisting his words for months and by now it’s not the worst thing they’ve done to him. But he would have expected that he would be served that treatment by the official mouthpieces of the country that has invaded his.