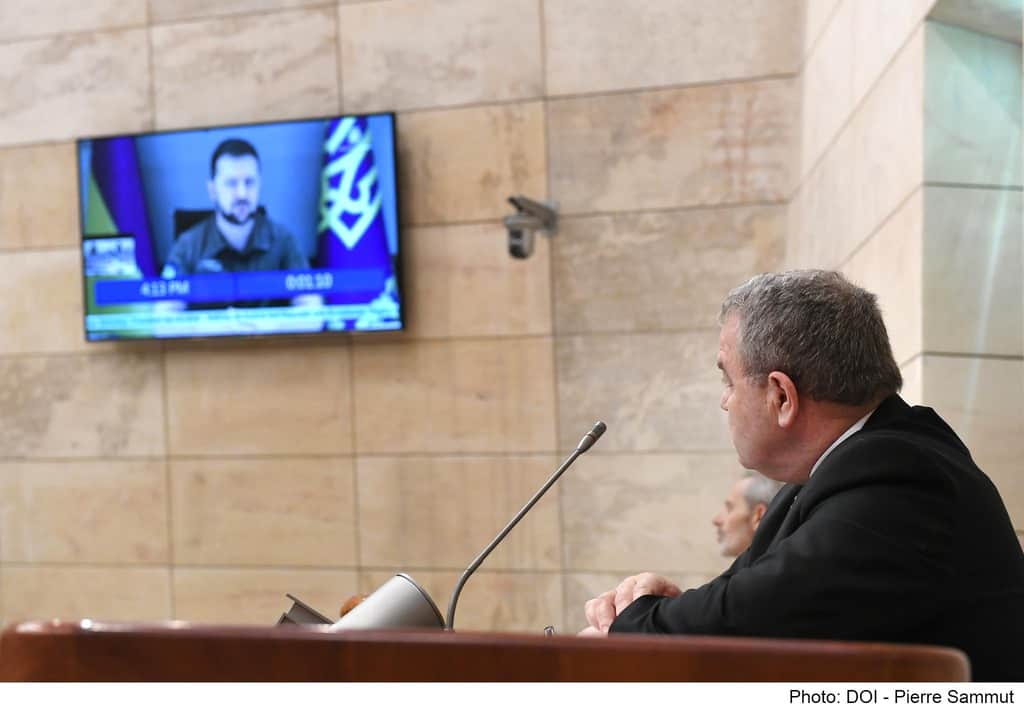 Volodymyr Zelensky is resisting an invasion of his country by the Russian army. He is standing tall while his city and several other of his country’s cities are being bombarded from the air and sustaining the cost of artillery fire. He holds back his tears as he witnesses the bodies of civilians and soldiers strewn across the fields.

It should be incredible that the Maltese government thought they could use him for a PR stunt like a photo-op with the woman singing at the Eurovision.

I am going to assume Anġlu Farrugia did not write his own speech but rather someone wrote it for him. Whoever did that is clearly unqualified for the job. Such a speech, of such diplomatic importance, requires Foreign Office filtering. The experts need to know more than how to write garden variety platitudes. They need to be familiar with the issues, and in diplomacy the use of words is crucial.

Ukraine has been sending out the message that this is not “a Russo-Ukrainian” war since the very beginning. This is a unilateral incursion, an invasion by an aggressor into the territory of the aggressed.

Which is why this is not just about using the term “conflict” instead of “war”, but it’s far more complicated than that. This is about the inadequacy of the term “neutral” in this context.

I remember this debate happening here in August 1990. The USSR still existed. Saddam Hussein’s Iraqi troops invaded Kuwait and, perhaps for the first time in the UN’s existence, the USSR agreed with the USA that Iraq’s actions were illegal and needed sanctioning.

The debate got closer to Malta than perhaps it otherwise would have because that year the UN General Assembly was presided by Guido de Marco. The sense at that the time was that in principle one could not be neutral between an aggressor and the aggressed. That’s like being impartial between a rapist and their victim. Beyond the principle, it was now practical to say so as well. If the USA and the USSR agreed, what was the point of being neutral, neutral between whom?

Our neutrality is not principled at all. It is opportunistic and grasping and Volodymyr Zelensky took time out of fighting a defensive war against one of the largest armies in the world to remind us how our obtuseness and our greed empower his enemy and weaken his people.

Robert Abela yesterday lamely pointed out Malta stopped selling passport to Russians. Zelensky looked like he knew perfectly well that Abela kept defending passport sales to Russians for several days into the war and never stopped promising he would continue to do so.

His minister at the time announced Malta would not comply with the EU sanctions regime because Malta’s passports “are not golden passports”. Abela himself accused Bernard Grech of racism and Russophobia for calling for a ban. Then a U-turn. They said they were “suspending” the scheme for Russians because in the present confusion they wouldn’t be able to do due diligence properly.

The real point here is that they’ve been giving passports to Putin’s friends for 8 years. There are probably somewhere around 1,000 Russian millionaires and billionaires successfully hiding their origins thanks to Malta’s complicity.

Malta made money from these passports and that’s the only thing that mattered to Robert Abela. I cannot say with any certainty what happened behind the scenes to force the government’s U-turn, but it is easy to imagine and to start making sense of all the medals and awards being handed down to sundry Maltese officials by embassies of other countries. Wait for Malta to be taken out of the FATF grey list and you can understand the scale of the quid pro quos that came into the suspension of citizenship sales to Putin oligarchs.

Robert Abela would project these as a win, the product of his smart deal making.

Consider how Malta is resisting a ban on Russian oil carried on European-flagged ships. Malta has the largest EU merchant navy. These are not Maltese-owned boats, and they are not manned by Maltese sailors. They’re mostly Greek-owned and mostly Filippino or Turkish manned.

It’s fine to make money from merchant shipping that complies with international law. It’s fine to charge state fees and employ lawyers and accountants on the back of their trade.

But it is not fine to allow that asset to finance Russia’s war in Ukraine. It’s helping the enemy. The poor excuse is: ‘but Russia is not our enemy, it’s Ukraine’s.’ That’s the poison of neutrality. If we keep the rapist and their victim both at our arms’ length, we’ll be helping the rapist. Our moral obligation, doing the right thing, would be to use both arms to hold back the rapist.

Malta trying to be excused out of the ban on carrying Russian oil is only justified by money, nothing else. It is not justified by jobs, by economic or energy security, by the realisation of investment, let alone by the existence of any principled motivation. We just don’t want to be affected in any way, impacted in any way by the invasion of Ukraine because, though we don’t say it aloud, it’s their problem, isn’t it?

Someone who is living under the bombardment, never mind someone as blunt and articulate as the Ukrainian president, would be perfectly entitled to be insulted by all the empty words of spoken solidarity, and “thoughts and prayers”, to coin a phrase.

Whoever wrote Anġlu Farrugia’s speech (and the speeches of the political leaders were no better) was clearly not up to the task and to the occasion. Whoever wrote Volodymyr Zelensky’s speech (perhaps himself) knows more about the fine details of Maltese history than most people who live here.

At the worst time of the siege of Malta in 1942, Malta needed all the “humanitarian aid” it could get. Sugar, cooking oil, flour, the country needed those at a time when people exchanged gold for carrots. But all the sugar and all the flour in the world would have gone only so far in defending the islands. It would have allowed our grandparents to transition to a Nazi occupation on relatively fuller stomachs.

We think almost exclusively of the UK, of which Malta was a colony at the time. We remember those maniacal rescue missions through Gibraltar and Alexandria mostly sunk in the Mediterranean. We think less about the American merchant shipmen, so far away from home, their ships and their lives punctured from air assaults of an enemy they did not know and could have stayed entirely safe from across the ocean, so many of them dying in the attempt of delivering plane fuel to these islands.

We don’t remember often enough how long it took Americans to get out of the convenience of their ambivalence about European war and their neutral attitude to the Nazis. We recall the war by how it felt when it ended, victorious, resolved by the mobilisation of the world against the fascists. We don’t remember how long it took the people who ultimately saved us to realise that we needed them, how many of our grandparents would have to die before they took a shot at dragging their oil tankers here.

Naturally our Parliamentarians were, at least judging by what they said in response, entirely oblivious to Zelensky’s message. The message is that when being neutral on principle is not relevant, one is being neutral because it is convenient, even profitable.

And that is just plain disgusting. All you need is to add on top of that greed, the thin veil of hypocrisy, of thoughts and prayers, and of solidarity.

In these last few years Malta’s sense of itself, its national morality, the respect it enjoyed in the world, have been sacrificed and replaced with misguided national interest, for which read the quick greedy buck. At any time standing next to Volodymyr Zelensky our very own darling Anġlu Farrugias were bound to look diminutive.

In these days of ġib ‘l hawn u tieħu ‘l hemm xejn, we were unworthy of his time.