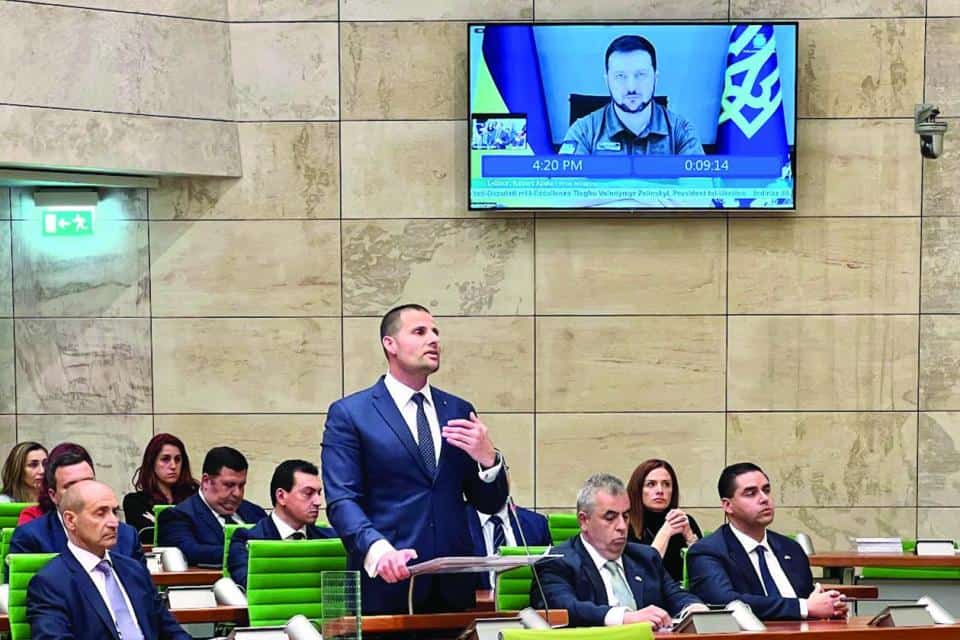 I wonder if Robert Abela ever asked himself what he’d have done if he was a political leader during the ascendancy of the Nazis. Would he have had the resolve to resist and fight the Nazis never relenting until their unconditional surrender? Or would he have sued for peace early on, or even perhaps when the tide turned and he felt he could reach a negotiated settlement, a modus vivendi with the Nazis to avoid paying the rising cost of war?

There’s been some debate about this subject because in his infinite wisdom Franco Debono recently wrote on Facebook that the war in the East is really Ukraine’s fault and, consequently, it should be left to deal with its issues with Russia alone. Now quite why Franco Debono’s opinion on this sort of thing should matter enough to anyone to get news coverage and start a debate escapes me.

But by and large his views have been echoed today by Malta’s prime minister, and that is of significant news value.

Malta’s prime minister may not be the most influential leader on the world stage. But his signature is required for the foreign policy of the EU, his utterances cast a shadow on Europe’s ability to appear united in its relations with its neighbours, including, of course, the way it deals with the Russian bear.

Read this Times of Malta summary of Robert Abela’s remarks on the Labour Party’s radio station. In essence the prime minister casts doubt on the Europe’s strategy of imposing sanctions and expresses opposition to Europe’s decision to apply pressure on Russia saying instead that “the only solution is dialogue”. Presumably, he means some form of agreement with Vladimir Putin over the heads of his Ukrainian victims.

“Abela said he did not want to see EU leaders ending up with their backs against the wall due to the pressure caused by skyrocketing energy prices across Europe,” which essentially means he is both discrediting the pressure the EU has put on Russia (the sanctions) and surrendering under the pressure Russia has put on the EU (the manipulation of the energy markets).

These are not speculative musings of lateral thinking and unorthodox problem-solving. Franco Debono can afford to indulge in such a thing because like me and probably you (unless you’re Robert Abela and you’re reading this) none of us are the head of the government of an EU member state. Robert Abela cannot shoot the breeze.

If the EU is to exist and it is to have an effective foreign and international policy, the heads of the governments of its member states cannot publicly undermine the decisions it takes and the messages it is sending to other countries, particularly countries run by tyrants with an aggressive bent and a remarkable indifference to international law.

In other words, we don’t negotiate with terrorists. We don’t let Putin think he can split us up because he can drive electricity prices up. We don’t let anyone think they can roll tanks inside a European country and carve their territory as their own.

Here’s something that can only be explained by Robert Abela’s cultural context. In Europe we believe in the rule of law. Vladimir Putin’s Russia acted illegally. We are required, in respect of our basic values, to impose sanctions because international action (like action in our private, everyday lives) cannot be justified by power and might but must be justified by law. We are required to think less about our pockets and more about what’s right.

But that’s not the way Robert Abela and his party run this country. It would be surprising to see them argue it should be the way the rest of the world works.

This is not just theory. Robert Abela seems to have forgotten that Ukraine is a candidate country of the EU. She’s one of us. Her interests are our interests. The integrity of her territory is the integrity of ours. If we want the EU to stick by us if some loony tyrant emerges in Tunisia and Libya and decides to annex Filfla (or Valletta), we must ensure that bigger and stronger countries defend the right of smaller and weaker ones to exist.

You see, sticking together is not purely altruistic. This is entitled self-interest. It is in the interests of our own security that we grin and bear higher energy prices if that’s the best we can do to prop up Ukraine as it resists the unprovoked military invasion by its neighbour.

Dialogue? With a tyrant who thinks he has a right to proclaim that the right of another country to exist does not itself exist? With a madman who has dispatched his army, lying to his own people about it? What sort of conversation are we supposed to have with a man like that? Are we going to try to persuade him to claw back? Because that’s been tried. Or are we going to let him have his way with Ukraine and ask him not to please not march further west?

Robert Abela’s statements betray more than excruciatingly embarrassing naivety. This is disloyalty of the first order, not least to his counterparts around the European table, but more significantly to the leaders and people of Ukraine who are paying a far higher price than expensive energy bills.

Just 5 days ago, marking Ukraine’s Independence Day, the EU made a statement renewing its stand on Ukraine. The EU restated its policy that it will continue to support Ukraine until all its territory is freed from occupation, including that part of its territory – the Crimea – that has been under unlawful occupation for several years. The cost to us to achieve that objective is, frankly, secondary. It is the right thing to do and that is the only thing that should matter.

“In the coming weeks, the international community will have to stay the course on our triple strategy: supporting Ukraine, pressuring Russia and addressing the wider fall out of the war,” the statement read, insisting the EU will be making this position clear with the rest of the international community at the UN General Assembly meeting in New York. They should start with keeping Valletta on side.

The EU’s statement notes that at the beginning of the war “the Russian regime also assumed that the EU would be divided and unable to muster a forceful response… (But) the EU with its partners have shown unprecedented unity and determination to support Ukraine in all domains.” Trust Robert Abela to burst that bubble.

The statement notes that indeed the war “has sent prices for energy and food through the roof.” Nobody is pleased with that. But we stand by Ukraine because “Russia’s invasion has already caused six months of death and destruction. We have seen war crimes, massacres and indiscriminate attacks on schools and hospitals; around 10 million people forced to leave their home; and cynical attacks on fields of wheat and the weaponization of grain exports.”

Robert Abela believes that the proper response to this, “the only solution is dialogue”. Infant. Dangerous, incompetent, ego-centric, toddler.