The breakdown of a political marriage 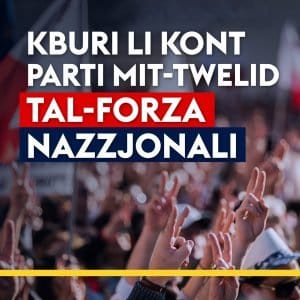 Far be it from me to tell people in an unhappy marriage to stay in it. And the PD-PN alliance, so promising when first announced, had become unhappy after the election result. There are crises marriages do not survive and the humbling defeat of June 2017 was such a crisis.

As with all divorces, the parties have a different story on what caused it and for a while the recriminations will abound.

One party accuses the other of changing and becoming unrecognizable from the party it joined in the alliance early in the year. Marlene Farrugia sealed a deal with Simon Busuttil’s PN. It was an anti-corruption, good governance alliance which could not survive the change to Adrian Delia whose platform and history are by his own account less focused on these issues.

One party accuses the other of attempting to possess them and control them. When PN voters faced a disappointing line-up of candidates to lead it, Marlene Farrugia looked like she meant to volunteer even if she was ineligible to contest due to the fact that she was not even a member of the party. I had criticised her at the time. She may have been sincerely worried the PN would end up led by the wrong leader, certainly wrong by her standards. But her intervention smacked of careerism and it put the new leadership on guard.

The new PN leadership stepped in with a program of cleansing Simon Busuttil’s legacy. As they see it, the cause of the PN’s crushing losses is found in its program and agenda before June. And ditching the good governance agenda is incomplete without dissolving the political alliance formed to put it forward.

The new PD leadership stepped in with a program of benefiting from any loss in support suffered by the PN due to its leadership change. It therefore needed to look and sound distinct, even critical of the PN rather than as some subset subsumed within it. If it remained in a tightly knit alliance with the PN, unable to criticise its leader and distance itself from his history, PN voters would see no reason to move to them.

A marriage has well and truly failed when the parties decide they are better off outside it then within it.

The PN and the PD have both reached this conclusion several weeks ago.

However inevitable, there are many reasons why this is a disappointing reality with deeply damaging consequences for the country.

To begin with the tactical innovation of joining political groupings in a shared list of candidates is not likely to be retried for a long while. You can rail against the fact our electoral system rather favours larger parties but for as long as it benefits them it is not likely the large parties act against their own interest to make life easier for smaller ones.

The Gonzi Commission of the mid-1990s proposed guaranteed access to parliamentary seats for smaller parties but Labour trashed that idea.

The electoral list alliance method that Simon Busuttil and Marlene Farrugia designed was a way around the rules and for the first time in decades we now have a parliament with more than two voices. Considering how timid the PN’s criticism of the government has become and how eager it sounds to find ways of cooperating with the government, it may prove providential that we have a third voice to ensure some form of dialectic.

But this looks like a one hit wonder. The PN clearly aspires to a 50% majority and to get to the government benches without the need of negotiating any compromise on its own program with some small party. Coalition politics, like marriage, mean you do not decide alone. Disagreement and negotiation is an inherent part of the arrangement and no one ever said it would be easy. Now the PN wants to do without altogether.

The PN says thousands are flocking back to it. That gives it the confidence it needs to avoid even thinking of the need of allies. I have no way of knowing if its claims about its rising numbers have any foundation in fact. If they do they must be right that an anti-corruption, good governance agenda is electoral poison in the current climate.

The dissolution of Forza Nazzjonali has played into Labour’s rhetoric that alliances are unstable and a danger to orderly governance. It has also extended Labour’s crushing victory over anyone attempting to resist its take-over of the nation’s institutions in order to allow itself the space to close corrupt deals above scrutiny.

It has also increased the responsibility of civil society acting outside the partisan landscape to keep the flickering flame of resistance to corruption through times when the formal political discourse appears unwilling to pay it much more than lip service.