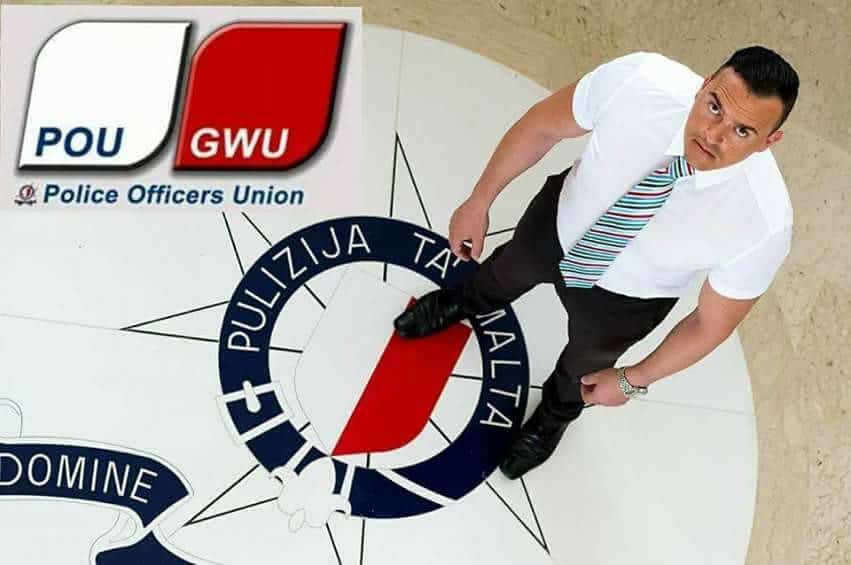 That Sandro Camilleri guy gives me the creeps.

For starters he’s a stereotype dressed as a self-fulfilling prophecy pretending to be proverbial. I know I’m the last person to give advice on physical appearance but those walnut crushing biceps of his are impossible to ignore on a ranking police officer. For remember he is that apart from being a trade-unionist. He is a full-time enforcer of the law.

But watching him talk the walk he really does put one in mind of a white supremacist, barrel-chest-bursting black-shirt wearing lout, whether or not he is and whether or not he is the sweetest guy ever to walk the earth in his private life. For the life of me, there are some stereotypes I just can’t get out of my mind’s eye, some of which would do ‘justice’ to the trolls and minions who vent their spleen in misogynistic, homo-phobe fashion all over the ‘net.

So he took a photo, in front of Castille of course, with that other stereotype of a police officer — Konrad-Mizzi-hugging, press-photographer-manhandling Joseph Mangion — in order to express solidarity for the criticism Mangion received for covering the lens of a Reuters journalist while both were on duty.

There is no circumstance, ever, where it is appropriate for a police officer to attempt to prevent, even with physical intervention, a journalist who has identified themselves as such from doing their job.

The police have no power to do this and if they thought they did and they acted on the thought, they are in breach of the supreme laws that govern free expression and the freedom of the press to function in a democracy.

Sandro Camilleri often speaks about people’s general lack of respect of authority for the police, like the little Gauleiter of Ħal Millieri that he keeps making himself look.

For not knowing that Joseph Mangion’s actions were illegal, or worse for knowing they were and pretending they weren’t, here’s my advice for Sandro Camilleri, my own little defiance for the misguided bullying of police officers who think themselves above the law.

I will use a cliche’ from one of Sandro Camilleri’s many favourite back-episodes of TJ Hooker, the ones he watches in dubbed Italian while he’s pumping iron at the office gym.

“Hand over your gun and badge man, and fuck off”, it’s about time.