Sent in by a sixteen year old author known to me. 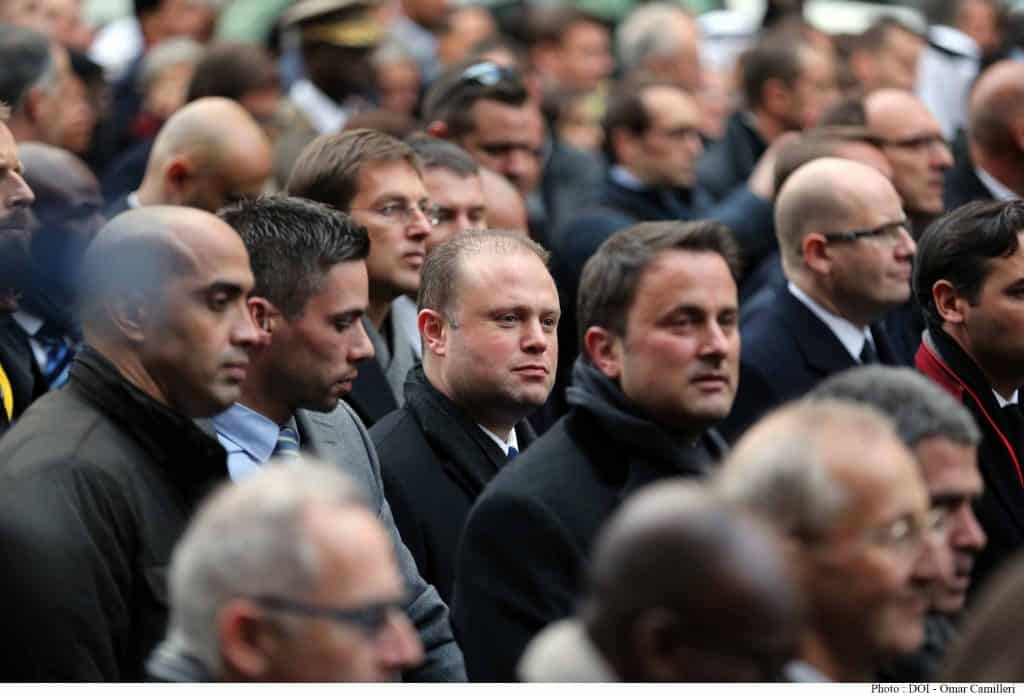 DOI photo of Joseph Muscat marching in protest after the murder of Charlie Hebdo journalists in Paris.

When I think the government cannot stoop any lower, my expectations are always surpassed. They put their own banner now. What the government is trying to do is make people forget that once there was a journalist named Daphne Caruana Galizia (not DCG, or ‘is-saħħara tal-Bidnija’, like many think) who was assassinated for exposing corruption – a valiant journalist who fought no matter what it cost her, not only in terms of money.

However, this ‘restoration’ (despite it being so urgent, no works have started) also had ulterior motives. This is a tactic aimed at discouraging activists, aimed at discouraging citizens and stripping them of their democratic right to protest. The message is loud and clear: You will face resistance for seeking justice for an assassinated journalist.

What activists have been doing is proving to the government that like Daphne, they will not be disheartened and will never give up. These fascist ploys generally result in activists doubling their efforts. All of us can do something to help, even if it’s just laying a candle or flowers at the memorial. If everyone had to lay a candle at the memorial, think of the result. Or even if everyone had to share a post. Together, we can get our country back.

Seeing the comments underneath articles is perhaps the most revealing that the Maltese are not, as often portrayed, compassionate people. Since when has laying flowers or notes been considered vandalising? Since when has remembering an assassinated journalist been illegal? Some people think that these activists have nothing better to do with their lives, but in reality, these activists are our hope, our strength and our inspiration. It’s more of the trolls who seem to have nothing better to do.

Those who paid for Daphne Caruana Galizia to be assassinated are still free to go about with total impunity. Since the assassination eleven months ago, this country has not only lost such a marvellous woman but is also losing its rights. Loss of rights means an increase in duties. These things do not happen overnight, they happen through small, consistent actions. And with small, consistent action we can counter this. We can clear the corrupt. We can clear the criminals and assassins, and obtain our rights anew. I find myself reminded of the lack of right to protest when seeing a paper torn whilst going for a walk and confirming it asks justice for Daphne.

Brave activists put up a large banner and flowers and candles, but they only lasted an hour. Who removed them? Government works, who also assaulted a journalist in the process. Does this remind you of democracy? Because it is, in reality, fascism, authoritarianism: The enforcement or advocacy of strict obedience to authority at the expense of personal freedom.

The banner has been taken down presumably by the Cleaning Department another time, presumably once again on Owen Bonnici’s orders. Would you guess he is meant to be the Justice Minister?

It is our right and our duty to support those sticking their necks out and to show authority that we will not be silenced.

Because even though clearing represents the effort put into trying to forget Daphne (sorry to disappoint, I know you’re working hard, but you will never manage this), Daphne will always be present within us, that courage that long after her passing gives hope to an otherwise hopeless country.

Just a note to those who wish Daphne to be forgotten – Roberto Saviano’s post on Facebook got more than 2k likes and was shared 335 times. Imagine how many people read that.