I wanted a few days to pass from Saturday’s gay pride march before I commented on this. Only a few years ago gay pride was a very difficult experience for people marching in it. And now that it has rightly become a party I would hate to sound like I resent any of it. For what  I’m about to write, the gay pride march is merely the background, not the context.

I think it is perfectly appropriate for both the government and political parties to join gay pride. I have no criticism for the fact the prime minister and the equality minister march to show their support. I have no criticism to the Labour Party for being represented by a delegation in the march and to share in the pride that their policies have made a huge difference to people’s lives in this respect.

I do have criticism for the pathological confusion of the Labour Party and the Labour government about where one stops and the other one begins.

The Department of Information announced the minister for equality Helena Dalli was going to march at the event and asked the press to cover the event. But Helena Dalli was nowhere to be seen when the government delegation marched past.

Instead a tweet by the prime minister revealed she marched with the Labour Party delegation presumably because that’s where the photo-ops were. 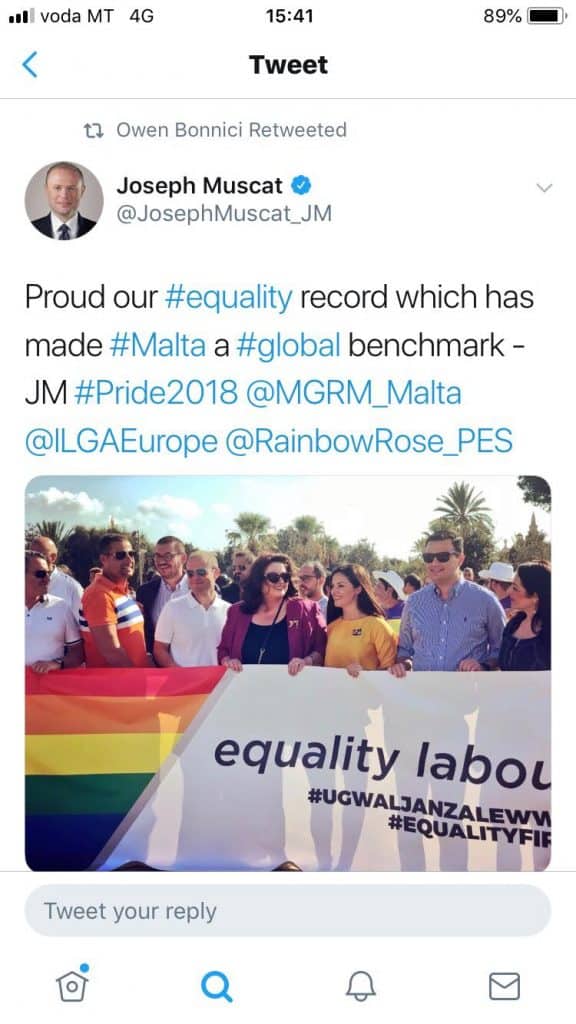 If what she wanted to do was walk with the Labour delegation as a Labour politician, that would have been a fair choice.

But why is it so hard to distinguish between the roles? Why is it so hard to stick to the basic standard that the Department of Information of the government is not used for party events? Why does the minister forget that if she were not thinking of her own popularity and personal votes it is of more value to the gay pride cause if the minister attends in her role of state guardian of equality, in her role of a government with overarching responsibility and concern untarnished by personal and political interest?

After all that’s been happening these last 3 years or so, this seems trivial. The comment perhaps would have been better understood in 2013 and 2014 when the worst thing that was known about the Labour administration was its utter disregard for standards and a pathological inability to do the proper thing.

Now we know they’re up to much worse, we consider the cancellation of borders between party and government as commonplace. But if we do that we abandon the basic aspiration as citizenry of being properly governed. By saying ‘they’ll never learn anyway’ we resign ourselves to stopping to expect they meet some form of standard of decency.

We can’t just give up.

Previous:October 2018: Events a year after the assassination of Daphne Caruana Galizia
Next:Owen’s slander