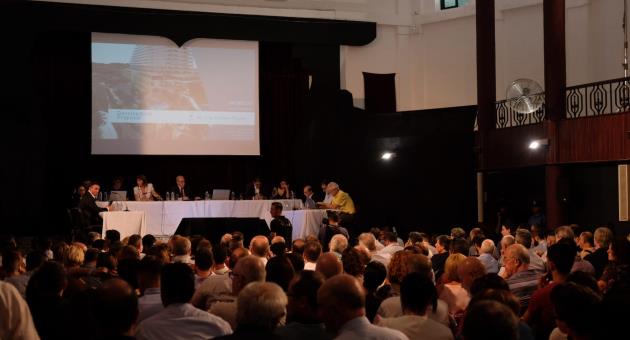 So Joseph Muscat ‘disagreed’ with whoever decided a middle manager in the civil service with a vote that could make a difference between ruining Silvio Debono and making him a billionaire should be flown in and out of her holiday by private jet to be at the PA meeting.

He sure can act powerless when he wants to.

We are expected to believe he was also powerless in the face of police heavy-handedness, verging on brutality, at the Graffiti protest at the PA.

If you were new to the scene in Malta you’d think he was a prime minister heading a government with no authority over its employees and no means to push its will through and to discipline those who defy it.

There’s a point where cynicism becomes so absurd that no one takes it seriously.

Does any fan of Joseph il-Kink seriously think he did not personally authorise the spectacular expense of ferrying a board member by private jet to this vote?

Would any prime minister tolerate anyone throwing away some €14,000 on a flight back and forth from Sicily, of all places, so some mid-ranking civil servant does not cancel her vacation leave to report for duty?

This is not even slightly credible. There is no plausible deniability here even if some heroic CEO falls on this particular sword claiming it was their decision, to have their resignation exchanged with some other iced bun.

In truth Joseph Muscat is powerless, but not in the way he’d like us to believe.

He has been committed to deliver the Pembroke deal — the land practically for free, the relocation of the school that was there, the unlikely planning permit, the transport links at public expense — since before his election in 2013.

Nothing could come in the way of delivering on this. The deal is so manifestly unilateral, so blindingly unfair, that whatever Labour trolls might be outwardly saying right now, even the core support of the Labour Party is asking itself what happened here.

The Pembroke tower, that was on sale when the land it is to be built on still belonged to you, puts the ranking of power into proper perspective. Some people speak of the infallibility of Joseph Muscat: how his security of tenure is so overwhelming, how the support he enjoys is of an unprecedented scale, how nothing he does or says dents it, how close he’s getting to winning a two-thirds majority and the keys to dictatorship.

But there’s a power greater than Joseph Muscat.

Silvio Debono has made him his bitch.

It is another indignity to the institutions of our state inflicted by Joseph Muscat’s backroom deals.

It gets truly disheartening to think that with all his strategic thinking Joseph Muscat’s arrangements for his own security are positively childish compared with Silvio Debono’s. Silvio Debono has got the PN eating from his hand as well.

Like jurors in a murder trial agreeing to convict the accused with a less than unanimous vote to dodge retribution, the minority votes against the Pembroke project at the PA board meeting look self-evidently contrived and designed to justify deniability.

But all limbs at the end of these strings dance to the routine the real masters choreograph. And someone today is laughing.

Previous:In case you wondered if they would ignore us
Next:A reply to Owen Bonnici