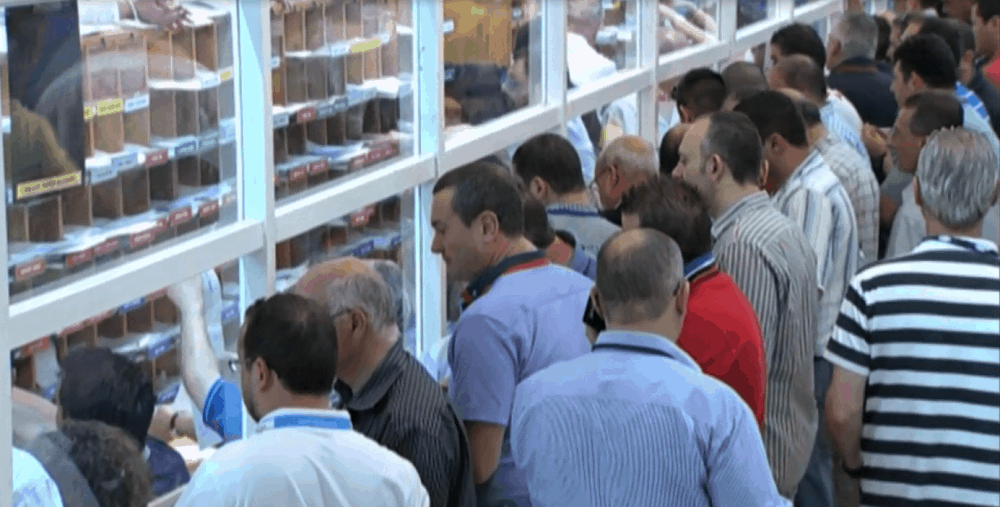 Here’s another one that is brewing.

Our ballot sheets will be counted electronically soon. Agents of political parties will no longer stand behind a transparent sheet of thudding perspex breathing down the necks of officials paid to look for the next number on the ballot sheet and dumping it in the relevant pigeon hole.

Instead, they’ll be looking at monitors that will display scanned images of ballot sheets that will be marked by a unique number for each ballot. Part of that number will be the ballot-box that vote came from.

That last number allows parties to understand what neighbourhood the voter that cast it comes from, down to a few blocks.

There’s some worry that since we’re talking about scanned images here and computers can count rather quicker than people, the scrutiny that political parties enjoy today to make sure there’s no hanky-panky will be less effective.

That’s why there’s this idea making the rounds that political parties get to get access to the scanned images of every single vote cast for some three months after the election.

Those who vote here are familiar with the single transferable vote that can have on a ballot sheet a complex combination of expressions of the voter’s will. Consider a hypothetical ballot sheet where two parties present 10 candidates each. A voter can vote on the same ballot sheet up to 20 times expressing their order of preference from the first preference to the twentieth.

In that complexity lies the opportunity to hide something which is strictly banned in a democratic system: the ability of a voter to identify themselves and therefore the way they have voted.

First, how can it be done?

There are a number of ways. Say a voter votes to all 10 candidates of a single party but casts a preference number 25 on one random candidate of the other party. The first 10 preferences expressed on that ballot are valid. The 25th isn’t because there are only 20 candidates on the ballot sheet and in any case once the sequence of numbers is broken the ballot is discarded at the point at which it is broken (in this case after the 10th preference).

But that voter never intended their “25th preference” to be an expression of a voting desire. It was rather a coded signature — an identifier telling someone who will see the ballot after it has been cast “this is me and this is how I voted”.

You could have for example a family of 5 voters who agree to vote for all candidates in one party but to do so in identical order of preference. Such a pattern in a single ballot box, from a single handful of city blocks, would again be a coded signature. “This is us. This is how we voted”.

Why is this not allowed? Votes are necessarily secret because if they are to be an expression of popular will they cannot be transacted against promises. If a politician demands that a vote provide evidence that they or their party has received that voter’s preference, they would be doing so in exchange for some form of reward. Worse they could be extorting that voting preference against a threat of retribution. You don’t vote the way I tell you, you lose your vote or you’ll get evicted or whatever else. That’s corruption. It’s not allowed.

There’s the converse of this which is equally serious. A voter might want to identify their voting intention perfectly willing to use that vote as a currency, to exact out of the candidate or party they have voted for, some form of reward.

It would be naive to think that only politicians extort votes out of people. People sometimes extort ‘favours,’ as we euphemistically call them, out of politicians and parties.

That’s what you get when people take photographs of their ballot sheet before casting them. And that’s why the practice is not allowed.

Giving political parties scanned images of every vote cast matched with a unique number that includes the ballot box in which it was cast, will do away with the need of taking photos of your ballot surreptitiously to indulge in corrupt voting.

This is a problem if you’re one of the many voters who would never dream of being part of this corruption. Effectively it means that your vote counts for less than the votes of those who use these simple tricks to identify themselves on the ballot sheet.

While your vote is worth only what it says when it is counted, the corrupt votes will be proper bargaining chips, units of currency exchanged at your expense well after the voting results are declared.

There’s a further danger to you. In some ballot boxes, with enough organised ‘marked’ ballot-sheets coordinated up front, the secrecy of your own vote, however careful you have been to protect it, may very well be deciphered by political parties.

Never mind the supposed three months limit that this harebrained idea is suggesting. If I’m going to be gullible about everything and accept that electronic voting or electronic ballot counting cannot be manipulated, I am not going to be gullible enough to believe parties cannot permanently keep a copy of these scanned images even after the 3 months are up.

Consider how careful the rules have been up to now to prevent parties from having this sort of data in their hands.

In the present system, ballot sheets cannot be discarded after they are counted as they must be brought back out whenever a seat in Parliament is vacated during the term of that Parliament. Our by-elections here are not like in the UK. People don’t get to vote again to fill a vacant seat. And we don’t have a recall system at all.

Instead, when a seat is vacated they go back to the ballot sheets that are kept under wax seal in a strong-room in the vaults of the Presidential palace in Valletta, locked securely there so parties don’t get to look at them.

From that, we now make a leap of giving parties free and open access to this most private civic secret a person can have: their vote.

Even if you were to accept that the data will no longer be available to political parties after 3 months, this is massively problematic. Major decisions are taken in those 3 months after an election is lost and won. Our system allows voters — not parties — to rank candidates in order of preference. It also allows candidates to contest two electoral districts and voters frequently return the political heavyweights from two constituencies.

The practice is for political parties to choose which district is to be conceded to allow for a replacement to be elected in a by-election.

With the scanned copies of all ballots in their hands, parties will now be able to do more than decide which seat is to be vacated. They’ll be able to decide on the basis of certainty of who would be filling them because they’d have complete access to the voting data before it is even counted.

To be sure even political parties are a bit queasy with this level of intrusion. A Labour member of the electoral commission proposed a motion to ban the practice but it was later withdrawn and a motion to approve it was approved by the vote of that same member who somehow changed his mind and the other 3 members nominated by Labour and, as the PN members voted against, approved with the support of the casting vote of the chairman.

After the electoral commission approved the idea it will be up to Parliament to decide whether to make this law.

If political parties look only at their interests, they will vote to give themselves the right to have copies of the scanned ballot sheets. You will hear the rationalisation that the law already gives parties in Parliament the right to a copy of every document in possession of the Electoral Commission.

But surely whoever wrote that law wanted to ensure that parties are not cheated by the Commission. It was never meant to give them a right to the ballot sheets that until now are locked away for no one to look at again after the counting is done.

There’s something else. You will be told that this data will be shared with political parties to give you the comfort that the announced result will reflect the true voting intention of voters. But even that is a superfluous argument. Once the electoral commission declares a result and the President signs their report, MPs are declared elected and Ministers are sworn in.

Is anyone suggesting that an official result can be pulled back by the same Electoral Commission that has declared it three months after the fact? Surely they can’t be serious.

If the law is passed these big brothers will be doing more than watching you while they’re in power. They’ll be there with you at the polling station as you grip a pencil and screw enough courage to throw them out.