The attempt at clemency on grounds of naivety in an effort to explain Kristy Debono and Herman Schiavone’s meeting with Yorgen Fenech revealed by this morning’s The Sunday Times is itself naive. Nobody is that stupid.

This was not some clumsy faux pas. Herman Schiavone in this Facebook chat with party stalwart Boris Xerri said this was “a storm in a teacup,” and part of the established strategy to harm Adrian Delia ahead of the May elections. 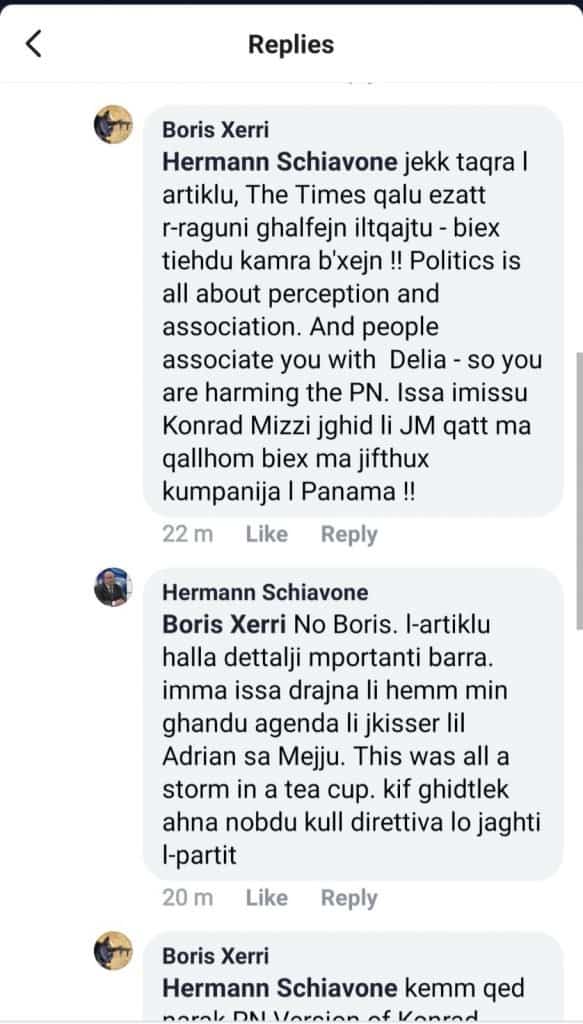 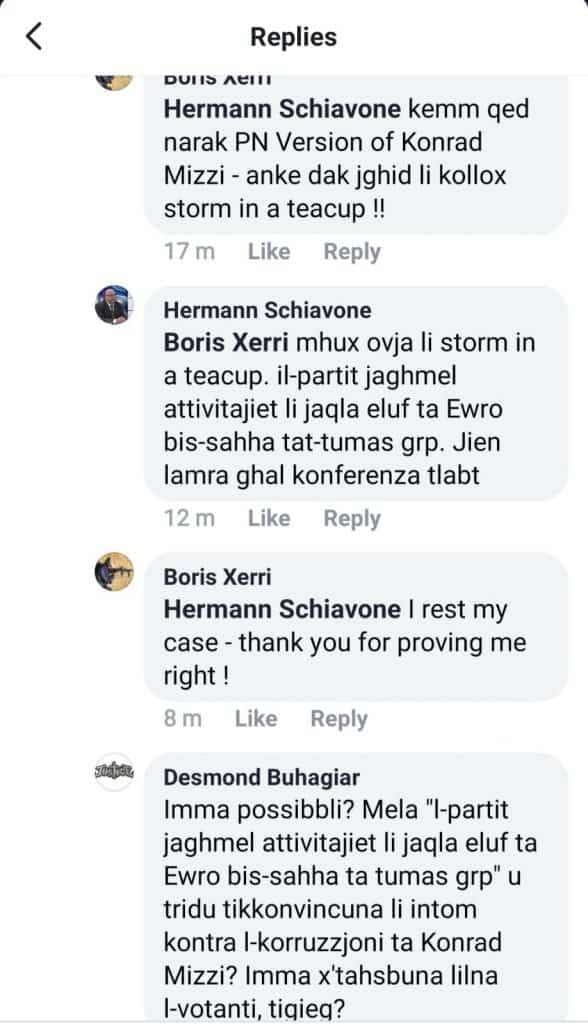 How is it done to harm Adrian Delia? Did he send Herman Schiavone and Kristy Debono there?

That is certainly what Herman Schiavone’s response seems to suggest.

And it is in character.

PN events hosted by the db Group in spite of the Pembroke scandal are a matter of course.

As is Kristy Debono who seems now to be as qualified as Edward Scicluna to become Finance Minister given her pretended oblivion and the u ejja come on policy of putting things into her own perspective. 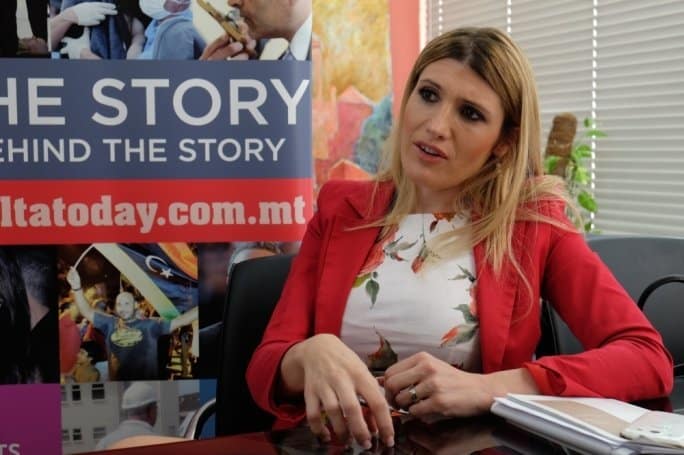 Seeking a sponsorship from Yorgen Fenech is not just a matter of bad taste given the risks people took to life and limb to reveal the corruption scandal he’s involved in.

It is rather an act of sublimation, a political act of normalisation and forced rehabilitation. Someone asked this morning if this was a case of ‘if you can’t beat them join them’.

I never saw Kristy Debono or Herman Schiavone or the PN leadership they belong do making any form of effort to beat corruption.

On the contrary their action this week is perfectly consistent with the Adrian Delia leadership campaign program of removing any principled approach to politics from the running of the PN. This was the new dogma they were drawn to in the first place.

They can hardly be criticised for living up to what they believe.

Equivocation has become the order of the day. Consider how Adrian Delia is quoted by ‘sources’ of MaltaToday telling investigators he never went to Jersey to set up an off-shore account in his name with cheques signed by him moving money to accounts elsewhere held by companies he was director of.

Of course this is 2001 when Jersey accounts were set up here in Malta on roadshows that worked not entirely unlike Tupperware meetings.

Look what the PN has reduced itself to now. 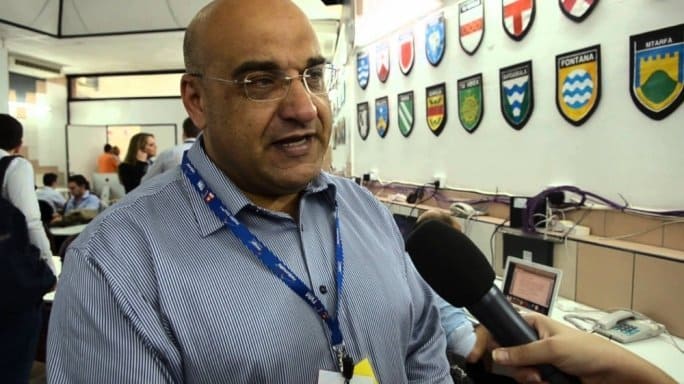 The Shiavone-Debono incident is only moderately embarrassing to them because as the PN approaches the MEP elections and looks in horror at the predictable (to everyone for a long time apart from them) catastrophic wipe out in the polls.

They are desperately hankering to the traditional PN voter who was far more resolute than they ever were to insist that morality cannot be entirely divorced from politics they would want to support and adhere to.

Now all of a sudden morality has become fashionable again and not just to the new way Nationalists.

Consider how George Vella walked into the Presidential office professing to be himself a moral compass for the country, like some form of latter day Ayatollah that can pronounce enough fatwas to bring about unanimous unity as any dissenters are buried under his opprobrium.

There was no talk of morality when his successor as Deputy Leader of the Labour Party, Anġlu Farrugia, lamented that Labour in Opposition was entering unholy alliances ‘fir-raba’ sular’.

He did not raise any of his famously bushy eyebrows when as Foreign Minister he was excluded as were Ambassadors or Foreign Office experts on his staff from the delegation at the infamous visit by Joseph Muscat to Ilham Aliyev.

He did not demand his Cabinet colleague resign when caught red handed stashing his “assets” in secret jurisdictions in Panama and New Zealand. He even voted against a motion of Parliamentary non-confidence in Konrad Mizzi.

When Daphne Caruana Galizia was killed he was not moved to even react, so disturbed had his moral conscience been by a manifestly political assassination his government was at least responsible to allow to happen.

None of this disqualifies him from a Damascus experience that could transform him into a truly moral leader. God knows we need one. Or ten.

But what we’re lumped with instead is a political class that seems to have been educated on a podcast of a précis of the Cliff Notes of Machiavelli, misunderstanding state and public-interest morality with a complete vacuity, an emptiness where their solipsism and self-obsession, their self-importance and self-indulgence are the only valid premises for moral choice.

Consenting to meet Yorgen Fenech even to discuss the weather when he’s a fugitive from the law which is not exercised on him because those with the duty to enforce it are compromised by his “sponsorships” is not politically naive.

It is the twenty-first century equivalent of kissing the don’s hand.

Anyone outside this cavelleria rusticana will sound like a fulminating puritan, a role that is very uncomfortable for the mild-mannered, tolerant, liberal, live and let live PN-lifelong voter that only thinks politics is working when you don’t have to think about it most of the time.

And yet there they are, reluctantly responding to survey after survey that with the options available to them, reading from the menu that ranges from greedy kleptocracy to obsequious acquiescence, they simply cannot choose.

No, Herman Schiavone, there’s no strategy outside your head to damage Adrian Delia ahead of the May elections. With friends like Kristy Debono, he really needs no enemies.