Notwithstanding the socio-political and multicultural challenges, Christian Democratic parties, particularly in Europe, are still influential.  CD parties seek inspiration from the teachings of Thomas Aquinas and express their relationship to the Gospel and the churches as a dialogue, resulting in a political conviction.  Since their early days they had distanced themselves from the churches. This was by inference addressed in the encyclical Quadragesimo Anno of 1931.

Their programmes use expressions like “respond to”, “interaction” and “search for meaning”.  None of which suggests submission.  What they do have to “accept” and endorse is the political conviction that results from such dialogue.

It is a consequence of the uncompromising acceptance of democracy. This Christian oriented character, open to all denominations that accept such dialogue, operates under a democratic constitution; they cannot have the last word, nor can they accept a situation in which others would make them the sovereign power.

The raison d’être of Christian Democratic parties is the collective and collegial approach; thoroughly alien to the Fabian Society’s school of thought. The leader’s mission is not just to devise a way forward.  His principal role is mediation amongst different groups within the party. Eddie Fenech Adami was exemplary.

Aldo Moro believed Christian Democratic beliefs were not exclusively confined to the governance of a country, but had to be effectively and positively practised within the proper party structures. This was his philosophical and Christian methodology that led him to the survival of the Christian Democratic party as way back as 1959, then plagued with warring factions, and to the tenancy of government until his assassination in 1978.     See here Aldo Moro’s speeches. 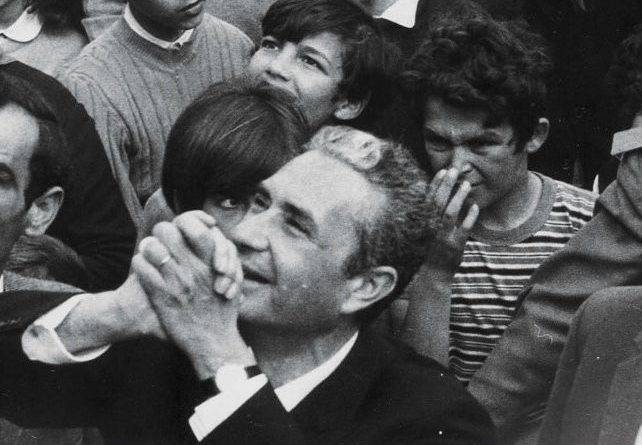 The situation compels one to regrettably conclude that this Partit Nazzjonalista is all but practising its Christian Democratic principles. This holds good both for the leadership team and more so for the alleged anonymous opposing faction. It is only natural that such parties would by nature devolve influence to such factions, or as the Italians would have it “correnti” – literary a variance in mainstream “thinking”.

Since times old these “correnti” existed in the Partit Nazzjonalista; since Nerik Mizzi and before.  The difference was that the then leaders up to Eddie Fenech Adami somehow succeeded to moderate and mediate and through at times a prolonged process of persuasion acted as leaders would act. But that was the era of honourable gentlemen. We have had influential figures who would take a step back for the general good.

When democracy is stable, it is in good part because all major political actors are willing to adhere to the basic rules of the democratic game most of the time.  Some of these rules are formal.   But many of these rules are informal, making it less clear-cut when they are violated. (Yascha Mounk:  2018)

So whoever today unintelligently, but in good faith, professes that there are no factions in the party need either to take a step back or familiarise themselves with the epistemology of political thought.

It is unfortunate to express such opinions, which may not be all that flawless. The trouble with the present situation of the party goes back to GonziPN’s last years.  And yet Lawrence Gonzi, apart from his handling of an economy in global chaos, and his performance in foreign policy, had produced the best Christian Democratically inspired budgets. Alas he was somewhat reluctant to keep a hold on his at times arrogant bunch of ministers.

And this, when the electorate was then already embarking on the premise that the country’s elite, elected or otherwise, aroused diffidence. By then the myth, more than model, of “direct democracy” was already asserted. People were opting for a choice of leaders, guided or misguided by prospective leaders encumbered with the deficiencies of self-interest, pride and fear. There were then no sources for mediation. It was just on the verges of populism: right or wrong and us and them.

This led to aspirations of “immediate democracy”. This urgency led to the 2013 electoral result; a benign autocracy that thrives on instilling divisiveness, submission, fear and a shackled democracy.

What initiated the current PN impasse and warring turbulence were the numerous personal political initiatives of Simon Busuttil, who I consider as the victim of circumstances, but who given his integrity and great sense of responsibility opted to resign with immediate effect without considering the outcome of such move. Those who lived before the revolution would recall the tapestry projecting his personal political initiatives. I wouldn’t know whether he sleeps well at night; but his presence during most campaign events was telling. And yet there could be a future.

Today we have to live with an Adrian Delia, certainly not my preferred bidder. He ran a possibly expensive campaign fringing on the nuances of a mob campaign. His mob team would pressure a 94 year old, house bound, to be picked up and grant him her vote.     And yet I still wished to believe that he would make the grade; he does have good qualities but unfortunately numerous weaknesses that again revolve around self-interest, pride and fear. Faced with fearful opposition from day one, instead of reverting to his much professed humility and listening modes and seek assistance from people who could act as intermediaries, he rallied around him individuals who could pay lip-service and others who believed had once been hurt or sidelined.  In short he is now engulfed in mediocrity and has lost his compass. And yet there could be a future.

Following this tirade — that does not come naturally to me — one needs to look ahead with optimism and believe that there is a future for a party that had stood the test of times.

But this begs the theorematic equation: How do those who could look both sides in their eyes and guide the same to the path of righteousness equate to the resonance that this party is just black and white, good and bad and us and them?

Whatever the outcome, the responsibility stands squarely with all the members of the party structures, including its media, but emphatically with its leadership whose task is to build bridges even if this means taking a step back. In no way could a leader in a Christian Democratic party enforce any degree of submission on whoever expresses forcefully a different opinion. Recource to legalities of rules is not a proof.

And to a lesser extent this advice applies also to this as yet certainly not transparent opposition faction and to the mushrooming civil-society cells which have the intent of fighting the party in government but also the party itself. Valuable people, who keep the steam flowing, even if most unfortunately have no understanding of what Christian Democracy is all about. It is freedom, respect and dialogue. To which I add benevolence: wishing your neighbour good within the parameters of justice.

It is absurd and insulting that the party, including those most legally-minded, dramatis personae available today, are now subjecting this notorious vast silent crowd to this degree of submission. Do these personae wish these warring factions to blindly acclaim Cicero’s defensive premise that “inter arma enim silent leges”? Given a reasonable and justified cause most actors, irrespective of self-interest, pride and fear, would avoid this chalice.

In conclusion this is a humble, possibly naive, proposition that follows. Certainly more seasoned party officials and men of letters could mutually improve upon if not re-equate in whole.

The General Council needs to be convened. If need be legalities that are not conducive towards an open and frank debate, that hence obliterates any calls for abstract retributions, need be temporary sidelined. The General Council may agree for Council to be then postponed for a definite number of days. This would provide a precious environment for informal inter and intra-group dialogue. It is suggested that a small team possibly not involving active dramatis personae be appointed to facilitate dialogue.