Sent in by a regular contributor. 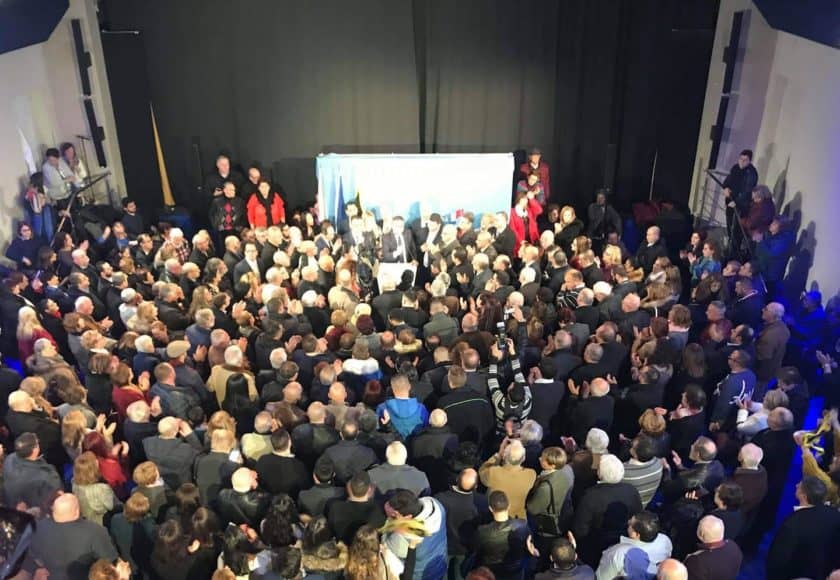 Whether they like it or not, the Nationalist Party is stuck with Adrian Delia’s clan like the paralysed side of a stroke patient. Adrian Delia will leave on his own terms, when he wants to, not when 100% of the Nationalist electorate tells him to. It’s useless for the Nationalist MPs to engage with his mumbo jumbo democratic talk that undermines not only the democratic running of the party but also that of the country. They’d only burn themselves out. They’ve been doing that for two years, and nothing will change within the party in a year’s time, in two or three years’ time, or even beyond the next election. He will only leave when Labour’s agenda reaches fruition. The more people question his authority, the more furiously he defiantly hammers his immutable stake in hallowed Nationalist ground. It will be as impossible to displace him as it is to remove a limpet from its rock. This gentlemanly talk of mediation, diplomacy and compromise on the part of former respected Nationalist luminaries only serves to perpetuate the moribund state of the Party.

Because of this continual attempt at trying to salvage the unsalvageable, it has come to this point of no return. The good surgeon gives time for a suppurating limb to heal, two years if need be. It then comes to the point where his efforts fail and the limb goes gangrenous. At this juncture, the priority is to save the life of the patient by cutting the patient free from the gangrene that would otherwise claim his life in due course. This is not a knee jerk reflex act but basic resuscitation. It is an emergency situation born out of desperation and, every day counts. Thereafter, comes the period of rehabilitation or adjustment to the new life.

The Nationalist Party’s statute, institutions and policies have been captured by Labour’s proxies. The traditional Nationalists can no longer function within that structure. So, it stands to reason that they have to outflank it and work independently outside it. These MPs have to save the dying party by being the good surgeon who cuts the party free from its gangrenous limb. A moribund patient is no longer in a position to negotiate, reason or save his limb. It takes a big dose of courage on the part of both the surgeon and the Party. But where there’s a will there’s a way. There’s nothing dishonourable in it.

Think of Alex Zanardi who managed to reinvent himself after the mistake that cost him his two limbs.

One week has passed since the election results. All we have are:

1. Images of bereaved, commiserating Nationalist politicians wallowing in self-pity. I don’t recall ruthlessness ever being a forte of the Nationalist Party but I may be wrong.

2. We had the uncalled-for JPD co-option incident which consumed the attention of the Nationalist MPs. This was quick-fixed but not solved at all. These recurrent incidents are merely symptoms of the rot. A good surgeon does not deal with the symptoms but, rather, deals with the gangrene that causes the symptoms.

3. Then we had Adrian Delia repeatedly insulting the majority of the Nationalist electorate with his ludicrous interviews. He sounds more and more like a Labour apologist. Consider how he watered down the significance of the Council of Europe report as he praised the performance of the Labour Party and denigrated the Nationalist Party. That’s vintage Delianism! An election in a democratic ballot does not automatically make you a democrat. Democracy does not end on the day of his election but has to be practised daily thereafter.

A democrat does not override the will of four-fifths of his electorate. Nor does a true democrat cover his and his advisors’ inadequacies by putting the blame on the majority of the MPs in parliament (who privately do not subscribe to his opinions).

Adrian Delia has taken a leaf out of Labour spin masters’ manual of turning the truth upside down. He is already setting the script for the next post-general election’s press conference by blaming the traitorous MPs for the lack of his party’s progress.

Incredibly, former Nationalist luminaries are actually buying this up with their twowayism. Even as they berate Adrian Delia for not resigning, they berate the MPs for not toeing his line. Even the MPs have to go through the unenviable motions of expressing the politically correct cliché of unity with the leader each time they express a divergent view. Their body language belies the forced political correctness.

4. We also had the lofty words of former Nationalist luminaries (some of whom are partly responsible for the current mess) that do not get the party anywhere at this stage. Are they suggesting more gentlemanly negotiations with the ungentlemanly hijackers of the party? Some good it did to the party, these two years of attempted accommodation and rapprochement.

These grandees had the duty to block Adrian Delia’s accession two years ago but they eschewed that responsibility. The twin election results have now given them a second opportunity to enforce the will of the majority of the electorate in ridding their party of an unsuitable leader. Will they fluff it again out of political correctness?

Now is the time for action, not words. Only after the clinical act of severance from the corrupted party comes the time for words. That’s when the luminaries’ advisory and creative role becomes invaluable: in helping the new Nationalist spin-off party devise its own statute, formulate policies, plan out its strategies, develop its own identity, set its goals, design its vision, nurture the leadership qualities, assist its administration, construct its own infrastructure, promotion facilities and funding mechanisms, etc.

Previously Independent parties may even pool in their resources. All this can only materialise beyond Adrian Delia’s fatal reach.