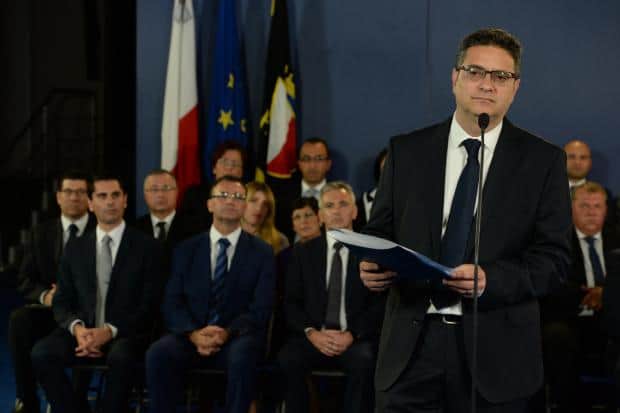 So, we’re back to square one. Adrian Delia’s party took a thrashing. The local council results are more representative of the true situation with Labour securing 58% of the votes (there wasn’t the vote-pulling power of the two MEPs). This was a direct message to Adrian Delia and his clan to move over. The haemorrhage will get worse as Labour, little by little, inch their way to the ultimate target of 66% if things stay as they are. Labour already has two-thirds of Malta’s districts under its control.

The Nationalists voted very wisely in the MEP elections. Labour took it badly. Despite the massive pyrrhic victory, there were no celebratory carcades. Apart from spitting their scorn against the two victors, as is their wont, Labour went into shock for a few days. It’s only now that they’ve unleashed their crude propagandists to give Adrian Delia a hand. Having miserably failed in the European extension of our Parliament, Labour’s shock troops now savage those MPs who won’t toe Adrian Delia’s line. This is their attempt to wipe out the only vestige of opposition in the local parliament. The MEP election results delivered a powerful message to Adrian Delia of the sterility of his policies and also revealed that his support base in the electorate is shrinking. At least two-thirds of the Nationalist voter base do not support his faction and this voter base will continue to increase.

Adrian Delia, supported by the Labour propagandists blame the Nationalist ‘traitors’, both the MPs and the supporters for the debacle. Within the party, Adrian Delia continues to behave dishonourably like Joseph Muscat. He denies the obvious, defends the indefensible and abuses the majority will of the party and its supporters. Labour, through its proxy Adrian Delia, has captured the control structures of the Nationalist Party, rendering any opposition to Adrian Delia’s power grip ineffective. To achieve his aim, Delia is helpless without the small crew of kamikaze pilots who do his dirty work. These are manifestly not up to the task, inept, gaffe-prone and self-serving. Rather than Delia, these are the real problem as they should know better.

The senatorial Nationalist MPs have much to answer for when they failed to nip the cancer in the bud during the succession race. Be that as it may, it was excusable for them to play the part of muttering zombies up to the time of Adrian Delia’s first electoral test. After all, they let loose the cat among the pigeons, and Adrian Delia had to be given the chance to show what he can do in the first two years. I still maintain it was a blunder when Simon Busuttil’s team naively decided to open the leadership race to the paid up members. The deciding factor in that narrow election result was the sector of Labourites masquerading as Nationalists after having religiously paid their membership fees.

The traditional Nationalist politicians are a demoralised lot. I can’t blame them, the Maltese public did not treat them well and never does. Now they have the responsibility of taking decisive action. They’re washed out and don’t seem to have an appetite for a fight. The Nationalists will now not be excused for being actual political zombies. The spotlight is expectantly turned on them. It seems their actions within the terms of the party statute are destined to be stonewalled by the kamikaze pilots who operate the controls in the cockpit of the Nationalist wreck. Surely, there are leaders out there, but no one is prepared to take the initiative. I don’t blame them. Who would want to embrace a lost cause and drink from the poisoned chalice? It is likely that some of them are planning to retire from politics in two years’ time. I don’t blame them. Being a Nationalist MP is a thankless task given the rough treatment they receive from the public. At the end of the day, it’s not worth the effort. I sympathise with them.

No one in the Nationalist Party has the drive and steel to do what Dom Mintoff did to Paul Boffa’s Labour Party. These MPs will be punished by the electorate for their inaction in the same way the kamikaze pilots will be on the day of reckoning. So, how do they deal with a maddening, nonsense-spewing Muscatian clone who won’t put himself to a vote of confidence? It’s not as easy as you think. It’s easy to say: “Oh, Adrian Delia has to leave! Oh, his clan has to admit failure and leave! Oh, they just have to be removed!”. This is because the Nationalist Party has been engineered into a microcosm of Labour’s governance of Malta with its expropriation of the institutions of the state. As Repubblika and other NGOs have been neutralised, the traditionalist Nationalist MPs within their own party are now a helpless, frustrated lot. I sympathise with them as all their initiatives are doomed to failure and yet they get stick from their own supporters because of their ineffectiveness.

For starters, the Nationalists have to do away with their habitual pussyfooting and do a spot of arm twisting. Either we have our vote of confidence or we plot a three year course diverse from the one Adrian Delia plotted for the kamikaze pilots: by resigning from Adrian Delia’s party en masse and fulfilling their role in Parliament as independent MPs occupying Nationalist party seats.

There are precedents of individual cases but not of a huge chunk of the party at one go. The two MEPs should do that as well given the way they have been marginalised by Adrian Delia’s Party. I’d say forget about the vote of no confidence. It will be manipulated anyway and will waste valuable time. The Nationalist electorate has given its vote of no confidence and that is enough.

The snowballing effect would generate a morale boosting groundswell support from the Nationalist electorate and come election time, Nationalists will no longer have that dilemma of whether to vote or of who to vote for. At the same time, they will be doing a fine act in defence of democracy by preventing Labour from achieving its target of 66% votes.

It’s true that the Nationalist Party will deny its media promotion to these independents. But in the age of social media who needs NET, the każini, their mass meetings and their newspapers? Who bothers with them anyway? At least they will get the bonus of being free from Adrian Delia’s ruinous touch that renders everyone anonymous. Think of the local council candidate who was marginalised in favour of NET’s shining star MEP candidate and yet the former was elected.

The effect of this is:

1. Generating public sympathy for their courageous stand: a moral victory from the get go. They would be doing the will of the majority of the Nationalist supporters. In the local council elections, the Nationalist voters elected the Nationalist candidates who contested as Independents.

2. Thwarting Adrian Delia’s kamikaze pilots. In their new positions, these independents will honour the electorate who put them in Parliament precisely to fulfil their effective opposition. The kamikaze councillor in a small Nationalist stronghold was punished for his vigorous defence of Delia.

3. Outwitting the Labour Party dealing a quick-fire double blow to Labour’s gloating mightier-than-thou ego in the wake of the EU elections. The aim of Labour in the MEP elections was the elimination of the two dreaded ‘traitorous’ MEPs. Their aim in the local council elections was certainly not to have Adrian Delia marginalised. But, the Nationalist supporters intelligently saw to that both times.

4. Salvaging the Nationalist Party in a twilight blaze of glory. Come to the next electoral conflagration, the kamikaze pilots would have run their course for ever, while smug Adrian Delia flies off into the sunset to receive the generous Labour reward for his mission accomplished. Not again. Labour are outwitted from their complete victory by the clever support of the two-thirds Nationalist electorate who ensure that the Independent Nationalist party is able to assume their rightful place in the cockpit of the new look Nationalist party.

5. The free expression of the Independent Nationalist Party. They’d no longer be gagged from doing their duty of criticising the government even though their “negativity” deviates from the Adrian Delia new way, thereby undermining his grip.

6. With time the independents will organise themselves into a well-knit unit with a sharing of different responsibilities — the NPI or PNI, the Nationalist Party of Independents. These will be exciting times, a time of rejuvenation. The pioneering zeitung tends to bring out the best from the character of the pioneers, and the effect is infectious. All types of support comes from unexpected quarters and favourable events emerge out of the blue. Who knows, one or two of the kamikaze might see some sense and change course before it’s too late? In such a time of self-discovery, a number of people can develop the leadership skills to steer the movement . There’ll be the inevitable fierce reaction from Labour, the ferocity being proportionate to the moral bankruptcy of Labour. But two-thirds of the Nationalists will be with them to parry the blows. Act I of the Nationalist risorgimento was won by the smartness of the Nationalist electorate. The scene for Act II has been set by the Nationalist electorate in no uncertain terms. But Act II can only be ushered in by the Nationalist Parliamentarians. The electorate is itching for the overture. Once launched, the support will continue to grow throughout the next three years.

The Nationalist Parliamentarians must strike while the iron is hot. There are no two ways about it. The way of “inaction” leads them to oblivion and ridicule. The other is the democratic way of salvaging democracy. They will regain the esteem of more than two-thirds of the Nationalist electorate (if you consider the Nationalist votes that went to the outgoing third MEP, to the independents and the sizeable chunk of 100,000 non-voters who now will enter into the all-important fray).

Cometh the hour, these voters will reward them for their efforts in the same way they rewarded the two MEPs. There no longer is time for wishy-washy mediation or compromise. Adrian Delia once said that if he is a liability for the party he will leave. He must be held to account for that statement. He will always undermine the Nationalist Party’s attack on Labour’s institutionalised corruption because of his baggage. One of the sub-messages of the loud and clear message in the council elections — the loss of Adrian Delia’s hometown and the losses of the districts associated with the hitherto zombified sons of their two illustrious politician fathers. The only bright spark was the good performance not only in Nadur but the better than expected performance in Gozo. This must be credited to Adrian Delia’s erstwhile main leadership challenger.