Joseph Muscat is seeking to preserve impunity: for himself and his accomplices 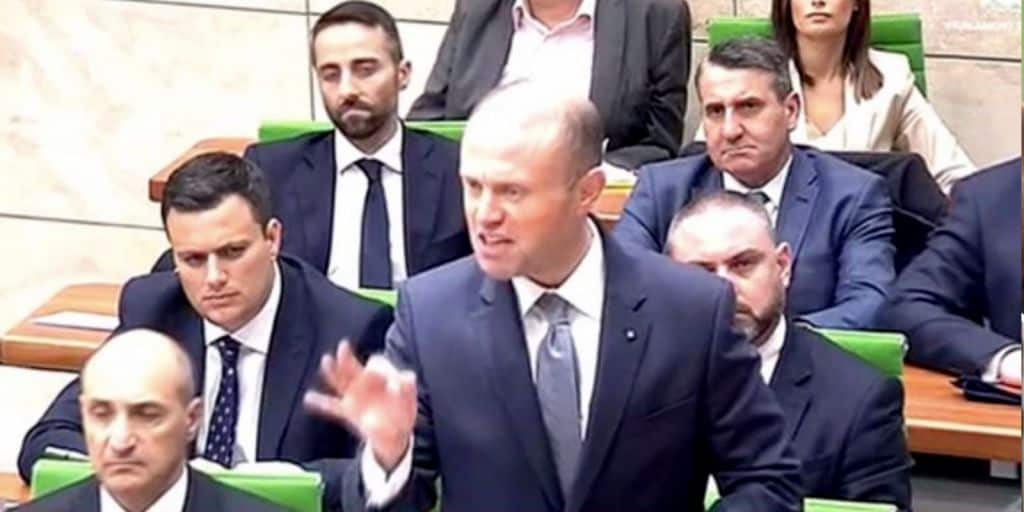 Joseph Muscat is now spreading the warped narrative that he is squeaky clean. Keith Schembri is the bad guy and the bad guy is now out. Let’s not let the nasty nationalists take over. Rally behind the leader.

Labour Party media is pumping Sunday’s mass meeting as if Joseph Muscat’s life depended on it. His political life at least, does. And if it all comes down to the size of his crowd, it will save him.

Labour Party supporters or voters no longer think the Panama scandal is a lie. They did so for the three and half years they have known about it. But they no longer think that. Since they don’t want to feel they’ve short-changed themselves by being gullible they feel they can justify Joseph Muscat’s lack of understanding that Daphne was right because after all they didn’t understand it either. As Jeffrey Pullicino Orlando admitted this morning, they were making the wrong but in their eyes justified assumption that Daphne was not saying the truth.

That’s reverse hero worship. From a “kink”, sometimes god, expectations of the prime minister are so low now, the supporters waving the flag for him this Sunday seem to think Joseph Muscat was not expected to smell a rat even as it was rotting right under his nose in Castille.

If they had any self-respect, even as they believe the unlikely story that Joseph Muscat is completely innocent of the corruption and its cover up, they would be demanding Joseph Muscat’s resignation for criminal stupidity.

Willi Brandt resigned as West German chancellor in the 1970s when it turned out one of his staffers spied for the USSR. There was no suggestion he approved of this or had any idea it was happening up to the point he read it in the newspaper. But he assumed responsibility because he was responsible for choosing his own staffer.

Joseph Muscat assured us of Keith Schembri’s “integrity” even as the country clamoured for his resignation over the Panama Papers scandal. Joseph Muscat vouched for his assistant saying what had been discovered was either “the biggest lie in Malta’s political history” or, when documents disproved that, that what Keith Schembri had done was harmless stuff “successful businessmen” do.

Now someone is accusing Keith Schembri of being the mastermind behind Daphne’s murder. Obviously, that remains to be proven. But that Keith Schembri sought to help a fugitive from the law wanted by the police for this murder by providing information and organising a veritable conspiracy to whisk him away seems now certain.

How can Joseph Muscat seriously expect not to assume responsibility for this?

It is time for the Attorney General to prepare charges against the people the prime minister has been harbouring. Konrad Mizzi did not resign because the weather turned sour. He was kicked out because at last his cabinet colleagues saw the light and realised that what Daphne was saying about his corruption was true. The FIAU reports, that were suppressed and for which David Casa was persecuted for having the guts to leak, are immediate bases for prosecution.

It’s right that the police are prioritising Daphne’s murder right now. Of course, they’re right to do that. But the police have a duty as well to start recovering in the eyes of the world some of the reputation we have lost because of these bastard criminal politicians.

Ian Abdilla should by now be arraigning Keith Schembri and Konrad Mizzi and charging them with bribery and corruption on the back of the FIAU files he’s had in hand for over a year. Now. Not next year. Now.

If a murder case against Keith Schembri is not ready, he should be charged today with passing official secrets – the briefings of the criminal investigation into Daphne’s murder and, it seems as well, information sourced by the security services – on to a fugitive he knew was suspected of the murder itself.

He should be charged with whatever crime they can lock him up for right away so that while he’s safe in the shower at Kordin they can proceed to build up the cases on the criminal empire he built.

They have to do this now. They have to send a signal to the world we’re not the clowns we’ve shown ourselves to be since the Panama Papers came out. We need to show we’re serious about corrupt politicians, let alone the murdering bastards we’ve had laughing at us over the past two years.

One final note. The police politely waited for Keith Schembri to resign before they locked him up. This misguided respect for the executive is wrong. The politeness allowed him to spend the night with Joseph Muscat plotting their cover-up.

The police have to work on the assumption that what they know Keith Schembri did – use his office in Castille to pervert the course of justice – he did it under the authority and with the knowledge of Joseph Muscat. Joseph Muscat has not even bothered to deny it.

That assumption leads to the next working assumption. Joseph Muscat is still using his office to pervert justice. There are enough contradictions in his statements to sustain a case to argue that.

If he insists on staying bunkered in Castille, there may come a time not too far from today when the unthinkable must happen. That even while in office – as a chief justice once was – our very own prime minister might have to be read his rights.

The thousands of people shouting Joseph Muscat’s name in Żejtun on Sunday are meant to scare the police away from him. Now we’ll know if Robert Musumeci is right: that in this country Joseph Muscat exists serenely above the law.

Robert Musumeci will be in Żejtun like his life depended on it. We need to be in Valletta to continue to insist on truth and justice.