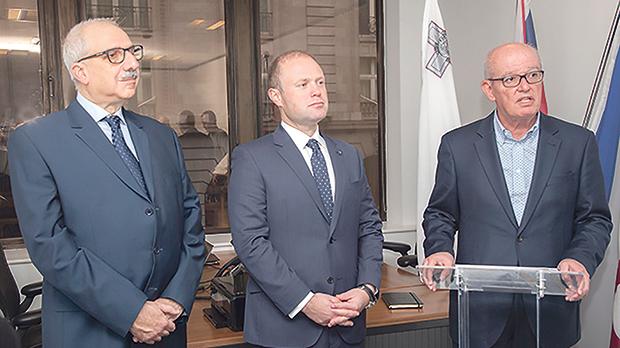 Yesterday was easily the biggest news day of the year which is why this Reuters report risks going over people’s head. It should not, because the threat of a meltdown at Malta’s largest bank is a threat to the very meltdown to Malta’s economy. And it won’t be the Gasans and the Apap Bolognas and the Fenechs who will wonder if they can put food on the table the next day. It will be the ‘sinjuri żgħar’ that will realise just how ephemeral the promise of the best of times was.

The European Central Bank’s internal report seen and reported on by Reuters yesterday speaks of “a litany” of shortfalls, transactions without oversight and incompetent management.

The government of Malta does not own the Bank of Valletta but it controls it. And it has abused that control to force on the bank its cronies to reach its corrupt ends.

Think of the Electrogas deal. The consortium lost its lead partner Gasol because it went bust. Gasol was supposed to finance the building of a power station so the other partners lost the money they needed to deliver on the contract.

What the government should have done was say ‘Sorry folks, better luck next time. We’re buying the energy from people who have the money to actually build the station to generate it’. But no. If they did that Keith Schembri and Konrad Mizzi would lose their $5,000 a day and they would have none of that.

So, the government leaned on the Bank of Valletta to advance Electrogas €450 million. That number is so big for most people it’s meaningless. But to put it in perspective it is what revenue (revenue, not profit) the bank makes in two years. And the government forced the BoV to lend that sum to Electrogas.

Can you imagine the corner cutting that went into that? The arms twisting. The bluffing with other banks. The squeezing of camels through eyes of needles.

That transaction alone did not bring BoV to the state of danger it is now. But the government had to transform a vibrant, solid bank that breezed without so much as a scratch through the 2008 financial crisis that shut down giants into a kneeling, chained slave of politicians’ greedy will.

The corrupt got their deals and made their money. But who will suffer if Bank of Valletta does not survive the present disaster?

When Pilatus Bank shut down, I felt no sympathy for its clients. All those corrupt money launderers deserved to take the hit and I sure was not going to sympathise with Keith Schembri if he was going to struggle to recover his kickbacks from passports sold to Russians. Or, as he would have us believe, the repayment of the loan he illegally extended to his own auditor because the auditor’s wife took all his money in an acrimonious divorce. Who cares, right?

When Satabank shut down its operations I felt differently. I saw hardworking people tear out their hair because they couldn’t scrape the money to buy milk while their employers’ bank accounts trapped inside a bank allowed to wallow and fester in its own money laundering conspiracies. I saw people suffer. I saw businesses shut down. I saw despair.

But they were almost all foreign and though it is a different sort from the racism that has the average little old lady shout ‘go back to your country’ to a young Nigerian mother on a bus, our pervasive racism forces us not to care when ‘foreigners’ are suffering. ‘Foreigners’ were Satabank’s typical clients and their suffering did not matter one bit to most people here.

It would be different if Bank of Valletta were to close its doors even for one morning while it sorted itself out. And how optimistic can I be when the European Central Bank wonders aloud if those who run the bank actually know what they’re doing?

Consider how small bondholders who leant money to the Tumas Group feel this morning. Their savings went into propping up Tumas Group’s expansion. The bosses got their flashy boats and their luxury lifestyles. They got their millions stashed here and there. But who’ll suffer most as the Tumas stock tumbles? It will be the smallest stockholder who put in their lifesavings thinking they were putting them in a safe place.

I hope a sweat bud is rolling down the side of your face right now as you try to imagine the Boschian landscape of a meltdown at the BoV. It won’t be pretty.

Previous:LOOKING BACK: John Vassallo on the Electrogas deal
Next:It takes three to tango