Konrad Mizzi’s fans are all over Evarist Bartolo now reminding him that he owes his re-election to Konrad Mizzi’s genius. What do these guys drink? Ah yes. I think they call it Kool-Aid. 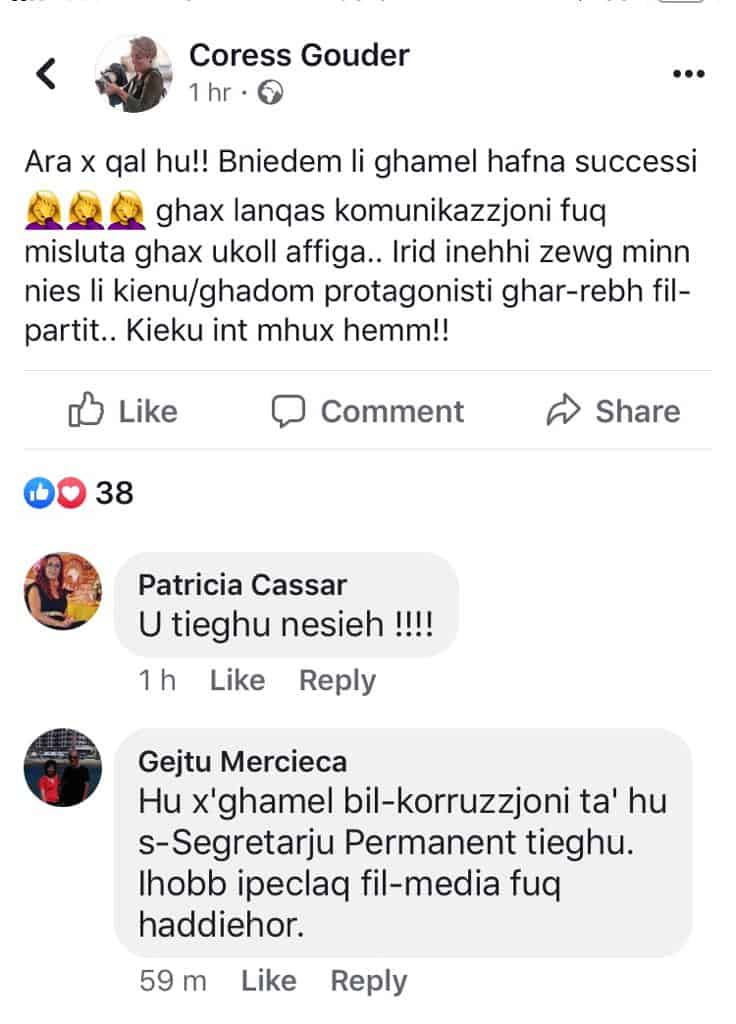 A Coress (is that a real name?) Gouder from Paola, constituent and obviously a breathless supporter of Konrad Mizzi warns Evarist Bartolo to shut up. Somehow Coress Gouder is still of the view that Konrad Mizzi deserves support. She doesn’t think that cashing a chunk added on top of everyone’s water and electricity bill is a problem. She doesn’t even think that the fact that the journalist who found this out was murdered apparently by the guy who bribed Konrad Mizzi is a problem either.

But that’s not what I want to write about. General Workers’ Union and Labour grandee Gejtu Mercieca comments under Coress Gouder’s post. He gives Evarist Bartolo a little of the standard Labour tu quoque retort reminding him of the corruption within his own office.

What sticks with me is how it is now that Gejtu Mercieca owns up to knowing that Evarist Bartolo’s ministry was rotten with corruption at the highest level involving persons of trust handpicked by the Minister himself. He’s known it but he kept that to himself, pretending it isn’t really a problem until the false imperative of protecting Konrad Mizzi overtook his party loyalty to Evarist Bartolo.

Gejtu Mercieca will not understand what this means. It means his short statement there confirms what we’ve been saying. Joseph Muscat has created an environment of impunity and his supporters have collaborated in that horror with their silence. Konrad Mizzi has not had enough. Gejtu Mercieca neither.

Previous:Protesting with pots and pans
Next:How dare you threaten me, pitiross?