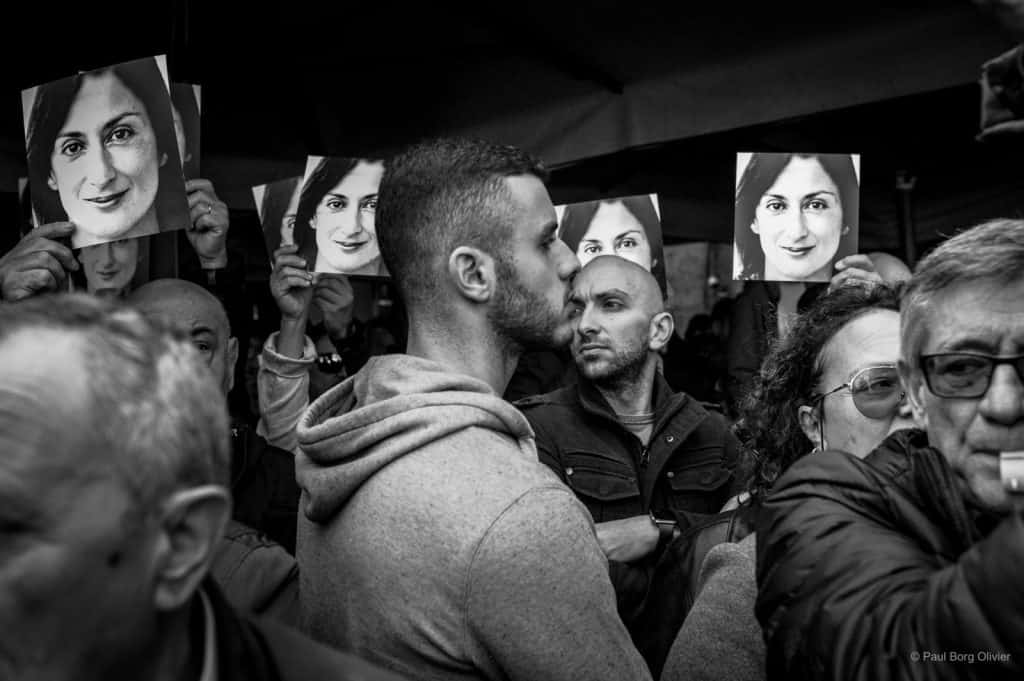 What’s important is that protesters yesterday did not get a permit to protest. And now we’re being put in the crosshairs. My wife and I have been receiving unfriendly messages these last 24 hours from people calling us all sorts of things. Anyone else who was recognised protesting yesterday is liable to the same onslaught of intimidation.

That intimidation is blessed by the police corps itself that today issued one of its very rare statements to say yesterday’s protest was out of order.

Some soldiers are all over social media pitying themselves because there was a lot of shouting as they marched past yesterday. Not all soldiers were offended by this. Most understood that since they personally had nothing to do with covering up for the murderers of Daphne Caruana Galizia the protest was not addressed at them.

Yesterday I posted some early morning advice to protesters saying that if horses were to be used by the authorities for the ritual, the shouting and whistling should stop as horses won’t understand the anger is not addressed at them. As it happened horses were left in their stables yesterday.

But some soldiers who think of themselves as some sort of circus act were all bleeding hearts this morning because in place of the applause, they feel entitled to they heard people shout ‘korrotti’ u ‘mafia’. Oh, grow up. Do we have to draw a diagram for you? Many people did: it had a big picture of Joseph Muscat on it. Not a soldier in sight.

One TV, that is apoplectic with shock and horror at the protest without permit of yesterday, quotes Roger Mulvaney from the army saying how disgusted he is and how hurt his sensibilities are. Is it a requirement to join the military to have the emotional intelligence of a 2-year-old whose mother just came back from hospital with another baby?

Yes, Roger Mulvaney I suppose seeing angry people saying Joseph Muscat must resign immediately is not the favourite part of your job.

You’d rather be useful to the nation’s security swimming alongside Joseph Muscat’s wife pretending for all that she can swim more in an hour than the man from Atlantis.

And here we are spending a day having to defend ourselves for having committed the imaginary crime of not asking for permission to say Joseph Muscat is a cunt and should fuck off pronto. Not a broken pane, not a trampled twig, not a traumatised pigeon and the government not only tries to justify squeezing the entire police force into Republic Street from 4am by falsely accusing us of being violent but it proceeds to accusing us of not asking for permission before not being violent.

No one needs anyone’s permission to say anything. This is not a monastery. And it’s not Pyongyang either.

You can roll your fake outrage and stuff it up your military butts. Will someone arrest Keith Schembri? Will someone sit Joseph Muscat for a proper interrogation? Will someone finally charge Konrad Mizzi? Will someone investigate the heinous crimes committed at the Auberge de Castille? And while at it will someone check if they got a permit to bleed our country dry?

And if you were hoping Chris Fearne or Robert Abela would put a stop to that you forgot to remember that Chris Fearne and Robert Abela were an integral component of the same machine that has protected Joseph Muscat’s gang thus far.

That job will go on.

And if someone dares stand up to them as Daphne did, they’ll kill them, because they can.

Previous:No permit is needed
Next:RaiUno Special tonight on Mafia in Malta and Europe