Read this report in today’s Times of Malta of a chat I had with their Sarah Carabott about Repubblika’s planned general meeting this Saturday.

When we announced the meeting some people — well Malta Today mostly — assumed we were getting ready to launch a new political party. That’s because we said we wanted to roam beyond the basic demands of a functioning justice system and start working on a vision for our country.

It’s not just in our law enforcement that our country suffers gross weaknesses. We want to think about education, health, the welfare of people and the fairness of our society, the prospects of earning a living in an economy that is sustainable without burning up what little environment we have left. 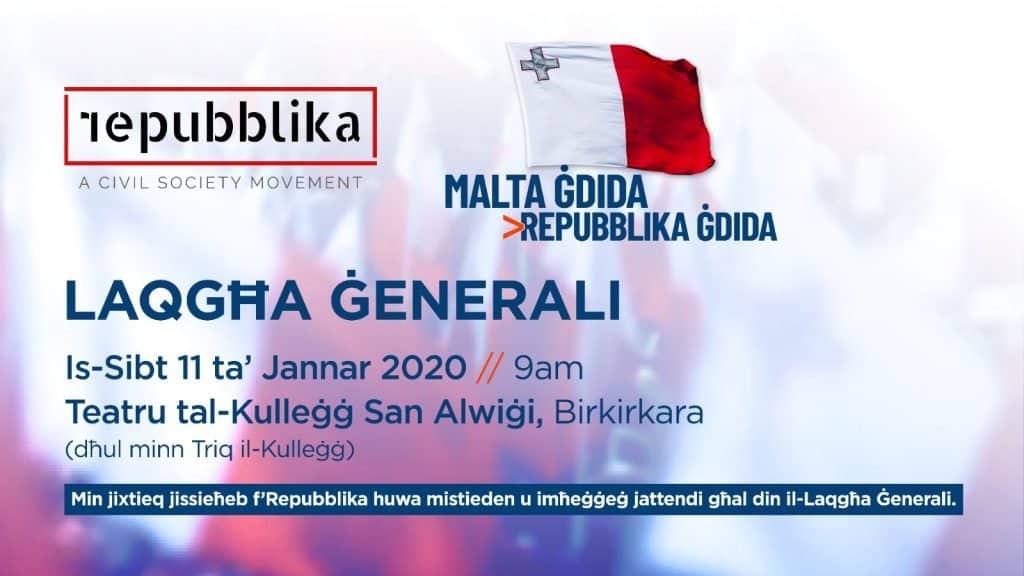 To be fair it’s a very broad scope. But thinking about our life as a community in silos is a mistake. That’s one of the many errors this country has committed the last 6 years. The cult of ‘money at all costs’ threw out all notion of restraint accelerating the degradation of our environment to unprecedented levels. Giving space to entrepreneurship was replaced with creating a barony of concrete pumpers and in the process allowing for an underclass to crawl inside their cars or inside garages without toilets to avoid getting wet when it rains.

Thinking across vertical lines of policy and articulating a vision for change has been the monopoly of political parties. Even wanting to talk like this has been assumed to mean there is an aspiration to become one.

We felt we needed to clarify that no, we were not looking at setting up a party, but we still have something to offer.

If you’re not part of Repubblika yet, this might be a good time for you to participate in developing ideas we can then promote nationwide with those whose job it is to actually run this country: not just politicians and political parties (who seem otherwise occupied mostly with their own survival most of the time) but also senior administrators, mayors, other civil society organisations, academics and so on.

You don’t need to have signed up as a member to join us at our general meeting this Saturday. It might be the right occasion to window shop a little bit and see if you like us enough to come along with us on this journey. This does not mean we’re going to look away from justice and the rule of law and fundamental human rights. On the contrary, this means that we are giving our demands context and meaning.

In the New Republic we can’t live with laws alone. And if we sit back to wait for our political parties to say what it is we’re going to live on, the best we can realistically hopeful is more of the same. If it’s the same as what we’ve seen these last 4 years or so, that’s a thanks but no thanks. I’d rather get busy making a better plan.