GUEST POST: Can the Partit Nazzjonalista be the solution? 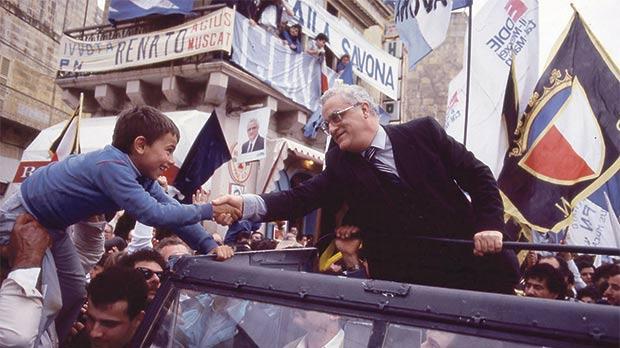 “Circumstantial evidence” confirms that the highest hierarchies in government for long had abetted and themselves engaged in evil acts.

One cannot but judge the current Labour government as morally and politically illegitimate. In accordance with Christian faith and the natural law a similar structure that for long years has developed its political action on mass consumerism and collective corruption complemented by violent coercion needs to be overwhelmed. More so today when its new incumbent prime minister instead of seeking reconciliation for its evil acts, prides itself that power vests solely in the party in government.

This appears to be the mission of the Partit Nazzjonalista; and yet it fails to make inroads when the party in government should have reached its implosive end. In these last turbulent months, civil society took the lead. It would be considered an act of deliberative as against a representative democratic initiative.

Massive repeated electoral defeats have led to Partit Nazzjonalista being perceived as a perennial observer of Maltese politics.

In this disturbing and disquieting aftermath, one can only ask whether the Partit Nazzjonalista, with its proven track record committed to democracy, freedom, and respect for the law and the dignity of man, can save us.

These are not so different times than those forty years or so back. Then the PN with a troupe of respected gentlemen, expressing variant opinions as how to approach a crisis, but expressing cohesion on the basic principles of its political beliefs, could boast of a clearly defined identity that was projected in clear practical comprehensible initiatives, could boast of a credibility that dug in the deepest of roots of society and could boast of a clear sense of direction based on the Christian values of personalised and collective freedoms, solidarity and vesting qualified authority in our communities along the existence and the prevalence of a true spirit of union and brotherhood.

It won the day not by promises of retribution but by a commitment towards reconciliation. A temporal and spiritual prescription that lasted some 25 years. It won the day because the party had a defined identity with which society could relate.

Today’s half-hearted rare acclamations that it is a party inspired by Christian democratic values is a clamour delivered in a desert of an unreceptive crowd. This is not attributed only to a “secular conscience” that world-wide approaches a twilight. It is the result of an inherent indifference to a Christian political conviction.

The relationship between religious beliefs and deeply-held secular convictions, the scope of the free exercise of religion, and the place of religion in the public sphere are aspects of the larger challenge. (Maclure and Taylor, 2011)

Christian Democracy, as far back as late 19th century, when it became imperative for Christians to assume an active part particularly in European politics, when challenges revolved on materialism, capitalism, liberalism and later Nazism and communism, had consistently sought to accommodate difference and freedom of conscience.

Jean-Dominique Durand (1995) defining Christian Democracy suggests that “… it is indispensable to highlight the importance of the idea of Christian ‘inspiration’… While avoiding religious fundamentalism, as well as clericalism, Christian Democracy is characterised first and foremost by the attempt to operate a mediation between religious faith and practical politics”.

Ernst Hirsh Ballin (2013) defines Christian Democracy as a dialogue with the Gospel and the churches resulting in a political conviction. Adherents are asked to respond, interact and search for meaning; none of which suggests submission. What they have to “accept” and endorse is the political conviction resulting from such a dialogue in accordance with a constitutional democracy.

Christian Democracy is not identified with a particular thinker but by a group of thinkers and practicing politicians who have had extraordinary relevance in Western politics, and that includes the founders of today’s European Union.

The relevance of certain political ideologies fell by the side in the course of history; they often sought the centralisation of political and economic power in the state or in a class who represents the whole people that was considered as an enemy of freedom and dictatorship. Christian Democracy has stood the test of time in its nuanced interpretation of reconciling Christianity and modern democracy. Durand (1995) contends that “There is not one European Christian Democracy. The expression covers a wide diversity stemming from religious, philosophical but also references to history, sociological and electoral factors.”

Is it much if one were to ask what keeps back the PN from embarking on such dialogue and discourse that are the pillars of the party heterogeneous and yet cohesive approach to politics?

Is it justified to conclude that this political thinking, comprised of “systems” or more precisely “constellations” of “political concepts” developed over long years by forms of group thinking, that through organised experience made the political world intelligible and open onto a field of possible actions, is today altogether absent or not known to officials and activists in the Partit Nazzjonalista?

According to a Konrad Adenauer Stiftung report for 2018 the PN is no longer considered as a Christian Democratic party. Its author explained to me that it had become a borderline case veering “with some good reasons to count it as a conservative party”. I very much doubt whether the party leadership team took cognizance.

These islands’ “vast silent crowd” could refer to a good number of politicians, activists and others that may join, including ‘deserters’, who sincerely share this thinking. Could these individuals who share this dialogue with faith and the Gospel resulting in the dignity of man that is best realised through a blend of pluralist politics and Christian social teachings kindly stand up for this crowd?

The political qualities and experiences in the Partit Nazzjonalista for a proposition of an alternative government exist. The forthcoming party reform, the proposals for which need be made public prior approval, need not just focus in revisiting party structures but need to take into perspective the paradigm of deliberative democracy.