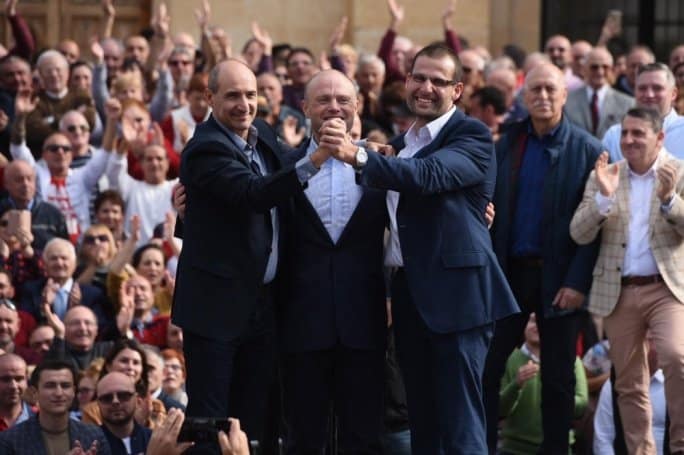 Campaigners for the Labour Party’s leadership have been appealing for unity. Theirs is not the sort of unity that someone like the Archbishop, say, professes. It’s not about focusing on our shared and common interests, sacrificing our own needs for the benefit of the greater good. That’s unity that comes from commitment to others before oneself.

Altruism does not come into the unity Robert Abela and Chris Fearne are preaching. Theirs is the sort of unity that is what forced unanimity looks like. Support us or be damned. Anyone who steps outside the line determined for everyone by the Labour Party is a traitor and should be cast off into the fire.

Consider this very succinct policy announcement by Robert Abela who aspires to be prime minister on Monday morning.

This is not Moses coming down from the mountain. “Our people” is not a reference to the chosen nation. He does not mean you and me. “Our people” are people who lead the Labour Party, who militate in it, who volunteer to help it win elections, who vote for it or who claim they have been persuaded to, in exchange for some reward.

If you’re reading this you’re almost certainly not “our people” so you won’t be ranked first.

The superficial meaning of this is the promise of tribalism, clientelism, favouritism, nepotism and discrimination. You know, they had a word for it in 2012: ‘meritocracy’.

Not that the 1984 perversion of the original meaning of the word meritocracy confused anyone in the Labour Party after March 2013. Consider John Rizzo’s testimony yesterday. He spoke about the ‘plata o plomo’ conversation he had first with Joseph Muscat and the next day with his boss Keith Schembri when he was forced out of the police force. They offered him money to leave the office of chief of police to a Labour crony. When he refused the money “on principle” (when’s the last time you heard that?) he was kicked out anyway.

In spite of John Rizzo’s undoubted merit someone less qualified, less industrious, less experienced, less loyal to his oath of office was put in his place instead. You know why? Because “our people first”.

It wasn’t just that John Rizzo’s replacement was one of “our people”. It was more importantly the fact that the new police chief would from his position take care of “our people” as well. “Our people first” means that leaders, agents and supporters of the Labour Party who qualify will be exempted from law enforcement. That’s how Joseph Muscat, Keith Schembri and Konrad Mizzi continue to get away with it even now.

Because “our people first”.

Who is Robert Abela going to consider as “our people” when he is ensconced in Castille Monday morning? Is Joseph Muscat “our people”? Is Keith Schembri “our people”? Will they rank higher in this valueless tribal order of merit than, say, those demanding justice for Daphne Caruana Galizia?

I know the answer to that.

The division now will be between those who come first and those who stay outside in the cold.

Imagine were poor people who can’t afford to pay rent will feature in this pyramidical structure. Think of migrants mad with hunger and isolation stuck in a cage for months denied recourse to any form of care or consideration. Think of the family seeking justice because the right to life has been denied by a government whose duty of care amounts to “il-bidnija orrajt?” ambiguously and impatiently asking if the pesky journalist has met her end yet.

We may not be Robert Abela’s people. Scratch that, we know we aren’t. The way they managed to get us to hope that seeing the back of Joseph Muscat is enough to look forward to better times is just another of their criminal plots to control this country and its people and preserve their power and impunity.

Chris Fearne recently said he was proud to have served as Joseph Muscat’s co-pilot. Here’s hoping then that they all end in the same inevitable destination one day. Because one day “our people” will see what you’ve done to them.

Previous:If Muscat knows who else got expensive watches and is keeping it secret, add another crime to his indictment
Next:If you want to lead this country, start by answering some questions