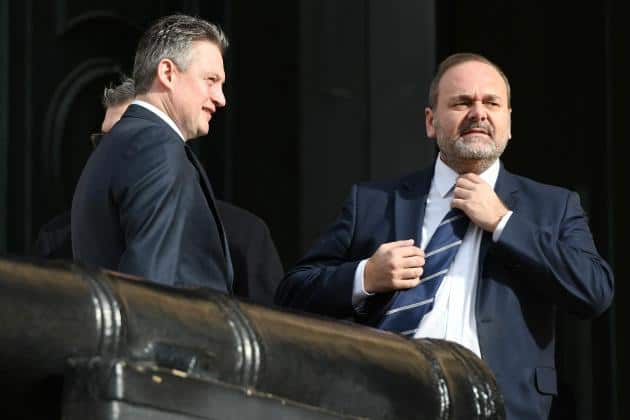 Robert Abela is throwing Jimmy Magro and Kristy Debono under a bus so we can watch that spectacle while Joseph Muscat’s gang runs away.

The government will push buttons that were left outstanding by Joseph Muscat’s administration that should please people who have no time for corruption, large or small. Today’s stories about Jimmy Magro and Kirsty Debono on the Times of Malta are such signals.

Jimmy Magro was the subject of the only conclusive case investigated by the permanent corruption commission in its thirty-year history. That was not because there had been no other corruption in those thirty years. But it was because there was no other episode were the corrupted person was so pathologically stupid that he actually solicited the bribes from the contractor in writing damning himself in the process.

The scandal here is that it took so long for the police to move on Jimmy Magro. No doubt that’s because for many years he was secretary general of the Labour Party in the Alfred Sant years. It hurts the home-front to go after luminaries of the Labour Party and charge them with corruption. But the political calculus now is telling Robert Abela that this arraignment is worth the political cost.

Then there’s the case of MPs who continue to collect a salary from the government agency that employs them without ever showing up for work. Kristy Debono is a classic case. For years she’s collected a salary from a regulatory authority that reported to a government minister she was shadowing.

A massive conflict of interest if ever there was one.

It opens up a series of questions about the status of members of parliament and parliament itself. Parliament’s part-time status is designed for the convenience of autonomous professionals: lawyers, doctors, architects, that sort of thing. Any MP who is not a minister can retain their professional activities while serving as parliamentarian after hours.

But autonomous professionals do not represent the make-up of our society. Many more people are in the employment of someone else. By and large all of these are excluded from service as parliamentarians.

We tend to think in residual English terms of class when we evaluate the social onion but when we peel our own society things are a bit more complicated than that. A reform of the institution of parliament needs to take our own realities into account and clearly a “part-time” parliament remains a discriminatory institution reserved for an unrepresentative segment of our community that is not by contemporary standards even an elite. It’s more like a caste.

Then there is the identity of whom, employed MPs work for. The Westminster principle of paying for MPs was specifically intended to ensure that parliament is not a grouping of people working for unelected people with money to pay them.

In our case there is a concern about how MPs fund their campaigns and in the case of some, one suspects, how they fund their lifestyles. But the case at hand is of MPs who work for the government when their job is to scrutinise it.

It shouldn’t happen. Parliamentarians need to be independent of government in order to be able to fearlessly hold it to account. Kristy Debono is certainly compromised by the salary she is paid by the minister she is supposed to shadow.

I’m frankly less concerned about the ‘being paid for not showing up for work argument’ which is facile and reductive.

Kristy Debono was paid a full-time salary to be a full-time MP. That’s a good thing if the government did not have the discretionary powers it is threatening to use now to pull that salary from her. There’s also the problem that paying full-time salaries to some MPs and not to others breeds the chaos we have now.

And there’s one final problem. The government has no qualms employing MPs that support it in government offices. We know that in spite of the compensation they receive they work for party while paid by government. They have no bosses to assess their performance and they are bound by no civil service rules that ensure continuity and non-partisan service.

There is again a case of double standards and an abusive and discriminatory approach that allows the party in government to reward MPs that are loyal to it with money that does not belong to them and to bully opposition MPs into submission.

The government no longer minds us speaking about this stuff. Of course, these are important issues. The separation between the legislative and the executive powers is an important objective. As is the punishment of corrupt officials like Jimmy Magro.

Which is why the government wants us to be talking about how relieved we are to be seeing progress in these matters.

What the government does not want us to have is any idle time in which to recall that former government ministers and their very senior appointees have been implicated in the assassination of a journalist, the corruption it sought to cover up and the cover up of the murder itself. And the fact that none of them has yet been sat down to answer questions arising from evidence we have already heard in open court.

Previous:One-party rule
Next:GUEST POST: Can the PN be a solution?