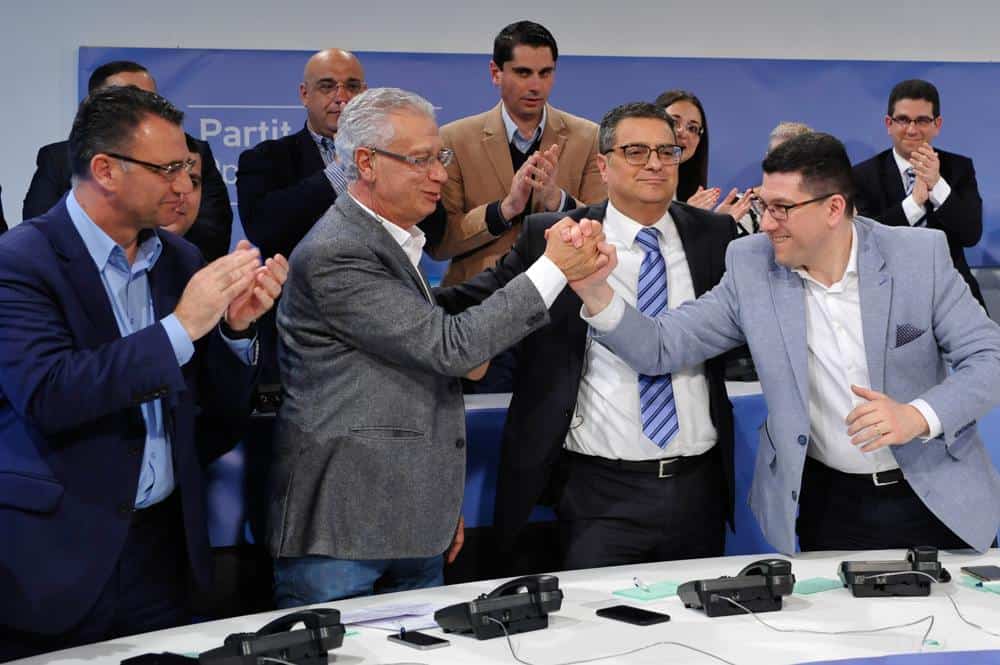 Adrian Delia thinks nothing can bring him down. He draws on to an imaginary past where titans led parties and no one could touch them. He conveniently forgets their hard work behind the scenes.

In the past three years since he’s been on the scene people have weaved all sorts of conspiracies to try to explain this phenomenon. Some think he’s a plant of Labour. Some say he’s financed by the crooks that finance Labour as some sort of spare wheel. Some say he’s an evil genius on somebody’s payroll. Some say he’s a womaniser, an alcoholic, a drug addict. All of that may or may not be true.

But speaking to people who worked with him these past three years, people who used to be his supporters, people who tried to organise him and serve in his headquarters, say he’s just a lazy bum with an inordinate ability to lay out the charm which becomes transparent the second or third time he spends a midweek night partying with his buddies and comes in to work all the worse for wear in mid-morning having cancelled most meetings that have been scheduled for him.

Former staffers in his office spoke to me on condition of anonymity. They told me that in the two years he’s worked at Dar Ċentrali he practically never had an original policy idea, he almost never took initiative to pursue some political position, he was never the one to call a substantive operational meeting or a planning meeting. For as long as he had staffers willing to try this was done for him until the pretence could no longer be kept up.

His former staffers say Adrian Delia avoided to convene the parliamentary group less out of fear of handling his MPs and more out of wanting to work less especially during late hours where he could be elsewhere.

The fact that he does not think he is in a job which should keep him busy emerged again in testimony he gave in court recently where he said he fully expects to be finished working at the office by 3pm and he could be home every day after that.

For being indifferent about the substantive responsibilities of his office, he is fiercely adamant he fully deserves to occupy it. His former staffers tell me that not infrequently he expresses a seemingly unshakeable conviction that he will be prime minister. Such a claim is never followed with a discussion on what he would do the day that would happen.

Adrian Delia’s disarming charm is reflected in his operational methods. He largely ignores the work of policy advisers, right up to Clyde Puli up to his resignation yesterday. Staffers tell me that he rarely contradicted their recommendations however radical they may have been even if they recommended departures from his own statements or even if they recommended his resignation. He would charmingly postpone the decision to a later date which would then never materialise.

One by one all his advisors left in frustration including the chief promoters of his leadership campaign. Former staffers speaking to me on condition of anonymity tell me that key advisors like Pierre Portelli, Mark Grech, David Bonello and Clyde Puli started to realise from Adrian Delia’s very first weeks in office in September 2017 that the new leader’s attitude to his job was irresponsible and unproductive. Some held out hope that he could grow into his job longer than others.

In the meantime, Adrian Delia’s closest retainers were sub-literate hangers on that had open access to his office at any time. Former staffers told me they had instructions to let his informal posse visit him in his office even interrupting formal meetings with visiting ambassadors or dignitaries.

This consolidated an army of loyalists around Adrian Delia that had no opinion about the policies of the Nationalist Party but appreciated the importance and access they enjoyed to “the chief”.

It is to that loyalist base that Adrian Delia is turning to again in this hour of need. Starting with his leadership campaign Adrian Delia has managed to project anyone with experience, training or professional political competence as the enemy. This attitude is then reflected in heckling that experienced people who continued to work in the party (as employees, as officials or as members of parliament) face constantly. This is accompanied by vicious trolling particularly on social media.

Any connection to the party before 2017 is evidence of collective guilt of a time when the party was ‘elitist’ and taken away from ‘the people’. Also, because the PN lost elections in 2013 and 2017 anyone remotely connected to the party leadership from those years is collectively branded ‘loser’ and ‘responsible for the party’s losses’.

Most politicians or political operatives from those years are guilted into silence. Certainly, there is always some shared responsibility for electoral losses and certainly everyone expects to make way for a new generation when the old leaves the battlefield battered and defeated.

But people who have lost wars before can foresee a looming disaster better than most. Especially one when the new generation of warriors is led by a general who sleeps by day and parties by night, who has not had a single original idea about shoring up defences and designing assault weapons, who would rather let his foot soldiers take their fill from the canteen than listen to the quartermaster’s concerns about supply lines.

For long they feared the guns of collective guilt that they fired on behalf of Adrian Delia would turn on them. And they can’t be blamed. Many speak of Clyde Puli, of Robert Arrigo, of Pierre Portelli, of David Agius and others as co-conspirators in a scheme to inflict Adrian Delia and therefore disaster on the PN and the country.

I doubt that is what they meant to do. Very much.

Adrian Delia is alone now in his tent of command ordering out those loyal foot soldiers who will fight for whoever wears the crown on the day but would rather that it is the guy who let them into his office whenever the fancy took them.

He’s an act five Macbeth, supremely confident that none of woman born can ever harm him.

But if everyone kept running from Macbeth, the crowned villain could have written himself another two acts screaming to himself on the blasted heath. It is time for the rest of the cast to get a move on and play its part.

This is for members of parliament elected on the PN ticket. Do not fall for the easy narrative that Adrian Delia projects that there’s a destiny you are somehow obliged to witness as it plays itself out. You are elected leaders with the job to write the future you want for your party and your country. It’s time to move on this false god. Stop waiting for some big revelation, or some scandal that would humiliate him enough to make him leave of his own accord. Surely you realise by now that Adrian Delia thinks he is immune until he sees the forest walk up to him.

Put your signature on the paper that decides his fate. Invite on your side the people that supported him. They know even better than you do the urgent need of removing him. It is time for Adrian Delia’s dream of unifying the PN to be realised. It is time to be united against him.

Previous:GUEST SERIES: The Subjection  of the Social Sector (Part 4)
Next:RIGHT OF REPLY: From Remenda Grech