Papers filed in Montenegro to register Enemalta’s purchase of the Mozura wind farm include a copy of the signed share purchase agreement that allowed Enemalta to become the full owner of Mozura Wind Park, the company that owns the Montenegrin wind farm at the centre of an ongoing scandal. 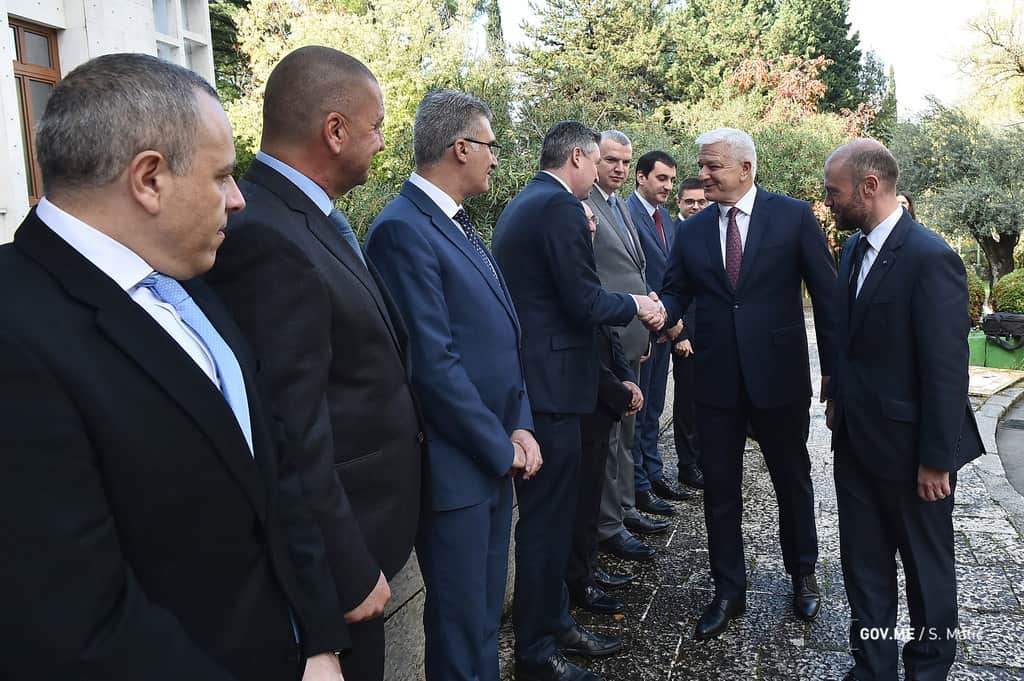 November 2019: Joseph Muscat looks on as Montenegrin PM Milo Djukanovic greets Konrad Mizzi while Keith Schembri awaits his turn. All three would be out of office within days. Source: Montenegrin Official Photo.

The share transfer agreement is between the Seychelles shell company Cifidex Limited and Enemalta and is marked as signed in the Montenegrin capital Podgorica on 28 December 2015. Cifidex has been revealed by a Reuters and Times of Malta investigation to belong to Yorgen Fenech’s former partner at Electrogas Turab Musayeb. 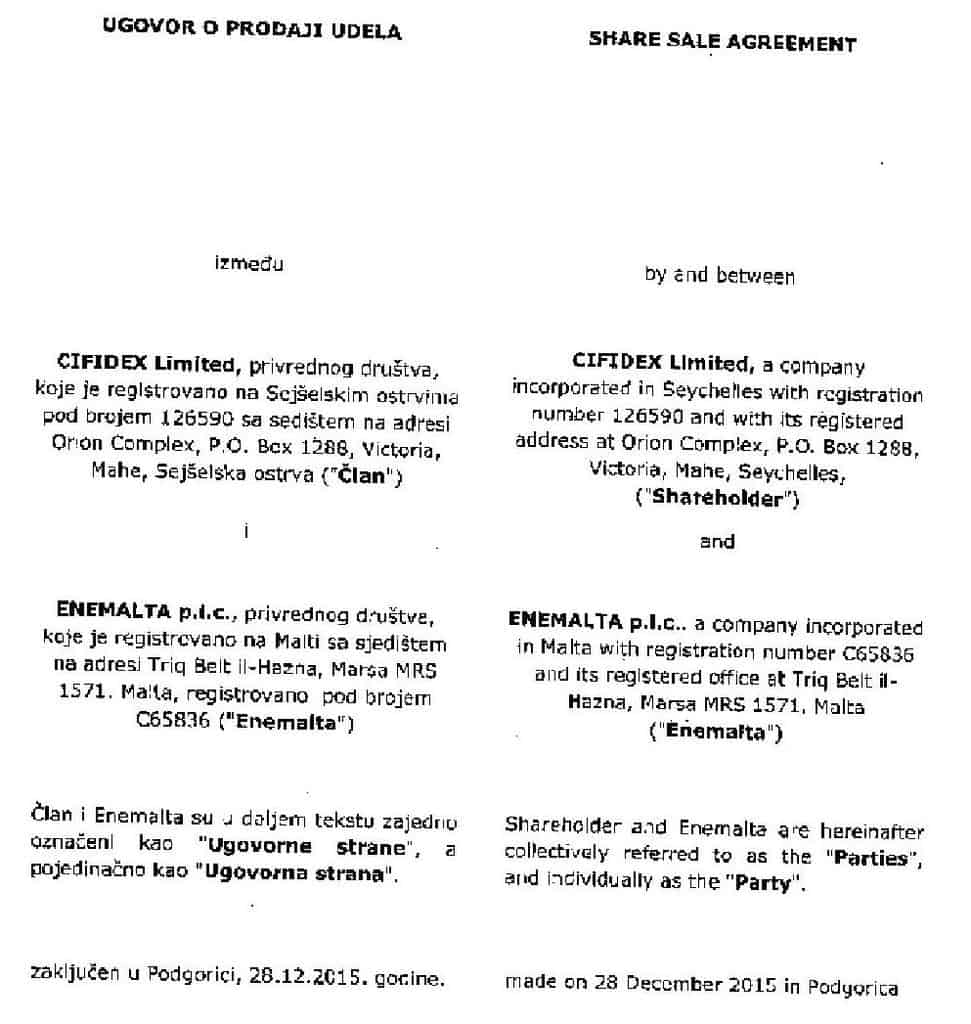 The agreement filed with the Podgorica tax office says that in exchange of the entire shareholding in the company owning the wind farm, Enemalta would be paying €3.5 million.

The paperwork is available on line from the website of the Montenegrin tax agency.

In spite of this, Enemalta itself in its audited accounts signed by auditors Ernst & Young for 2015 declares it spent €10.3 million in purchasing the company that owns the project.

Enemalta’s financial statements say that Enemalta bought the Montenegrin company MWP “to facilitate the transaction and the intention of the Board is to transfer the subsidiary to a related company in 2016.” Enemalta said it “never had the intention to operate the Wind Park itself and it was acquired with the intention to sell.” 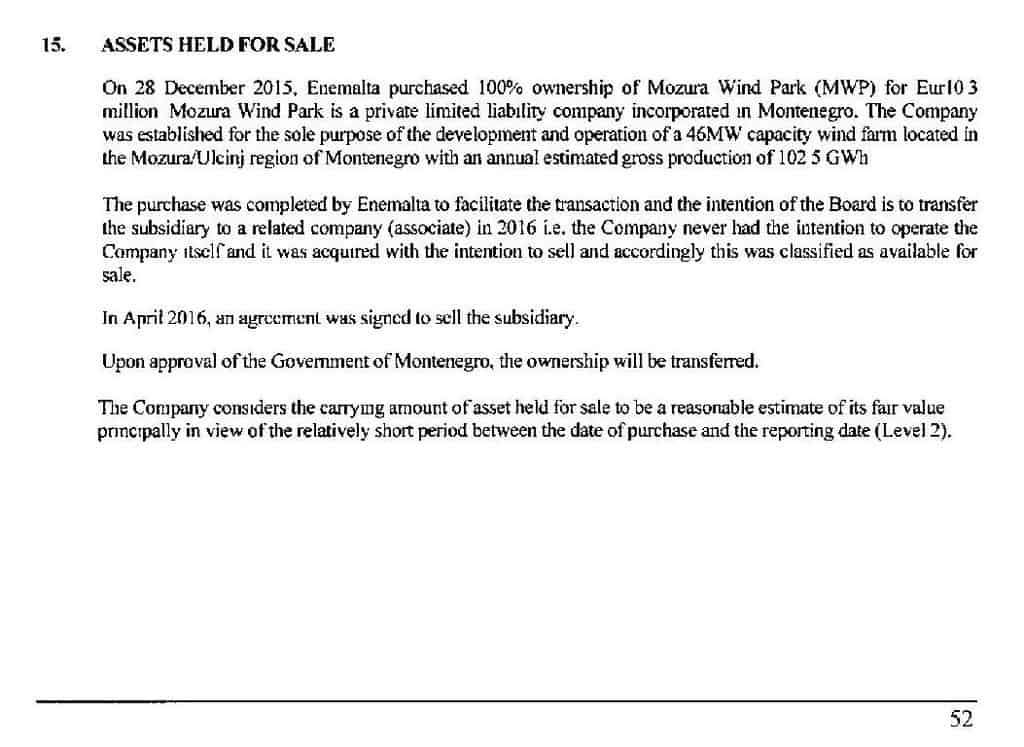 The accounts also say that in April 2016, an agreement was signed to sell the subsidiary.

The discrepancy between Enemalta’s accounts and the share transfer agreement the accounts refer to, cannot be dismissed as some grotesque accounting error.

Indeed, the audited accounts signed by the same auditors for the following year, 2016, confirm again that on 28 December 2015 “Enemalta purchased 100% ownership of Mozura Wind Park for €10.3 million”. 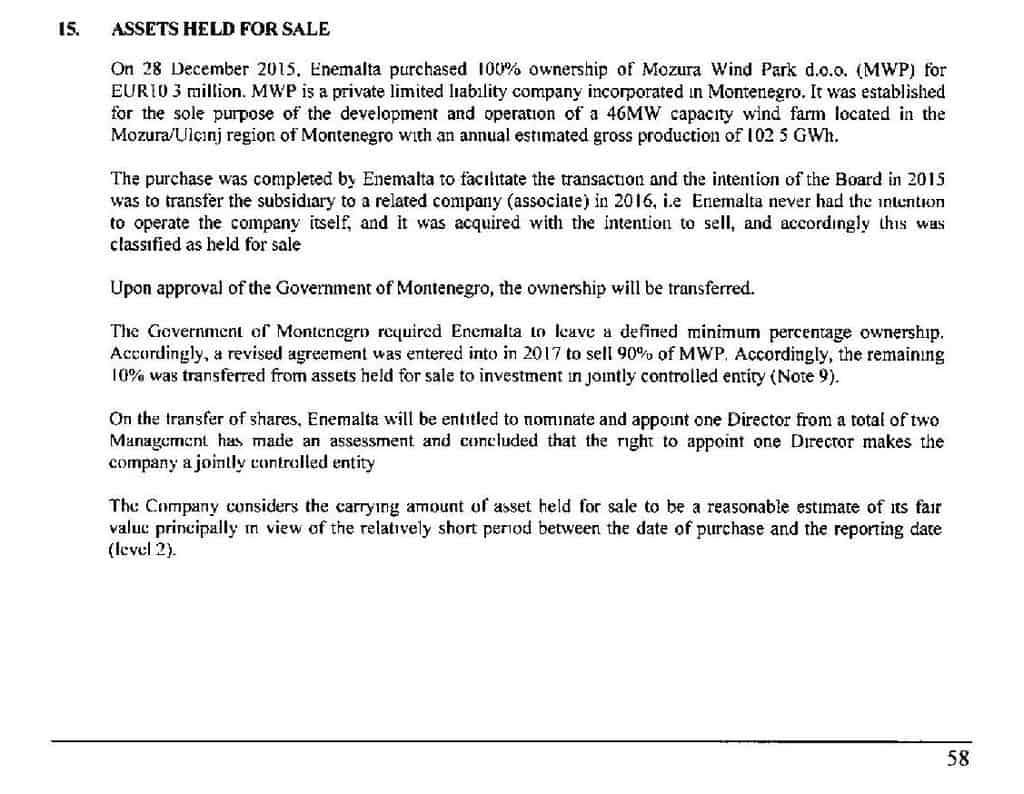 The 2016 accounts say that the Montenegrin authorities required Enemalta “to leave a defined percentage ownership”. Enemalta retained 10% and this was transferred from assets held for sale to investment. Enemalta “considers the carrying amount of asset held for sale to be a reasonable estimate of its fair value.”

The discrepancy should have raised red flags with the auditors Ernst & Young both in 2015 and in 2016 when they were deciding to leave an expense of €10.3 million out of the company’s profit and loss account. They appear to have decided to do so on the basis of Enemalta’s management commitment to resell its ownership in the wind farm to an associate company as soon as the Montenegrin government would allow.

The audit report refers to the agreement dated 28 December 2015 but it seems likely that Ernst & Young did not look at this agreement which would have told them the share transfer was agreed upon for a third of the cost their reports for 2015 and 2016 were stating.

Enemalta plc has so far made no detailed statement about the allegations of wrongdoing with respect to this purchase.

Previous:GUEST POST: The ‘coincidences’ in the wind farm deal
Next:LISTEN: How Muscat and Mizzi made Enemalta the SPV for corruption.