#occupyjustice: Stop the spread of the Corruption Virus

This statement was issued by #occupyjustice this evening: 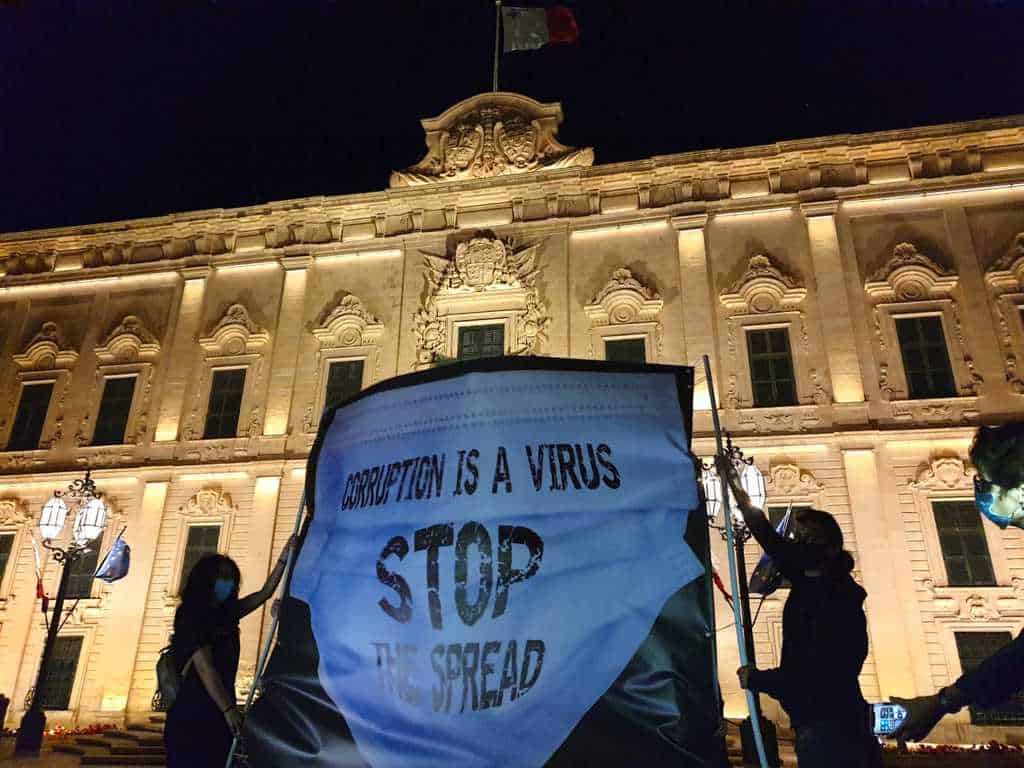 More recently, like many other countries, Malta lived through the COVID19 pandemic, and today, the country is gearing up to get back to ‘’normality’’.

#occupyjustice is appalled at the fact that, while Malta was effective in fighting an unknown virus like COVI19, the country has failed miserably at tackling rampant corruption that has infected our institutions – absolutely nothing has been done – quite the opposite, in fact, all under the guise of another Muscatian buzzword – “continuity”.

The real virus that has taken over our country is corruption. Covid19 may be under control, but corruption is alive kicking and spreading by the day, and Prime Minister Robert Abela seems to have neither the inclination nor the will to stop this spread.

Anyone who follows the media will know that the man voted The Most Corrupt Politician of 2019 has been reinstated as advisor to Prime Minister Robert Abela. The same Muscat who is ultimately responsible for the spread of the corruption virus that has overtaken the Maltese institutions. The same Muscat who protected his tribe of politicians and associates from being prosecuted, even allowing them to access crucial and sensitive information in relation to investigations being carried out into Caruana Galizia’s assassination.

Anyone who follows the media is conscious of the number of times that Keith Schembri’s name has come up during court testimonies. So why has Schembri not been arrested? Perhaps because the virus has also spread thick and fast within the highest ranks of our police force. It is now more than evident that protestors were right in calling for the removal of the likes of Silvio Valletta and Lawrence Cutajar, ex-deputy police commissioner and the

ex-top man himself, respectively, both also mentioned repeatedly in court proceedings. What has come to light is sickening and shows that these two individuals were actively contaminating any form of progress in the investigations.

And why has Konrad Mizzi not been questioned regarding all his dirty and corrupt deals, the most prominent being the power station contract and the selling of three state hospitals?

Prime Minister Abela seems to think that the way forward is that of herd impunity – a herd of corrupt thugs determined to stampede over Malta’s democracy. It is almost as if Malta’s new Prime Minister has discovered a vaccine for his inherited gang, making them all immune to justice. Or perhaps, in his newly gifted role as advisor, it was Muscat himself who injected Abela’s policies with this resistance to accountability, starting with the Prime Minister himself.

The fight for COVID19 might have interrupted our protests, but now that the Prime Minister has declared that we are to go back to “normality”, it is time to reassert our commitment towards safeguarding our democracy. Our “normality” will resume, as will our protests. Since the assassination of Daphne Caruana Galizia we have been unyielding and consistent in our call for truth and justice – we shall not stop; we shall not give up, until justice is served. 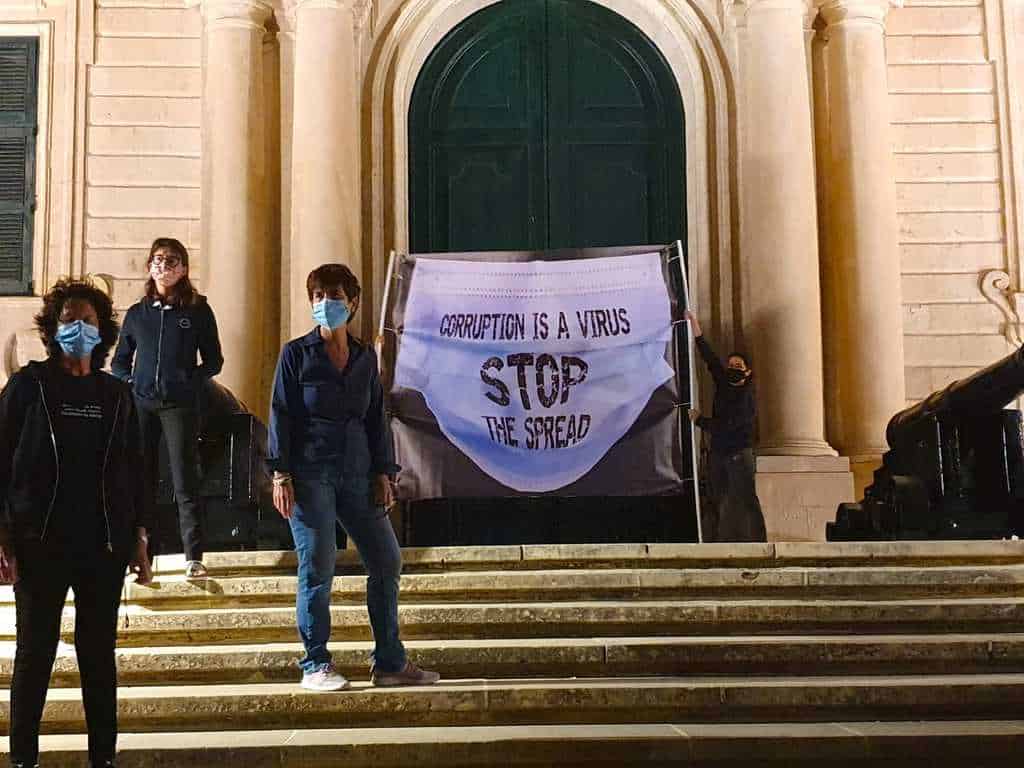 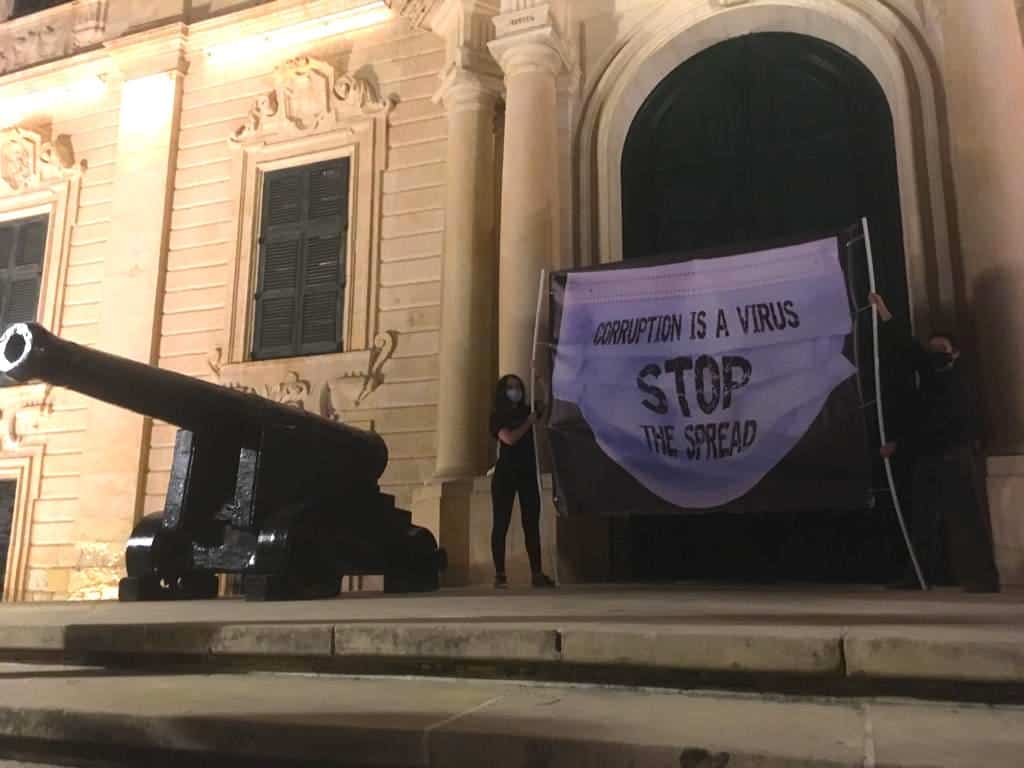 Previous:November 5, 2017. If you were outside police headquarters, you were right.
Next:Vigil in Valletta on Tuesday 16th