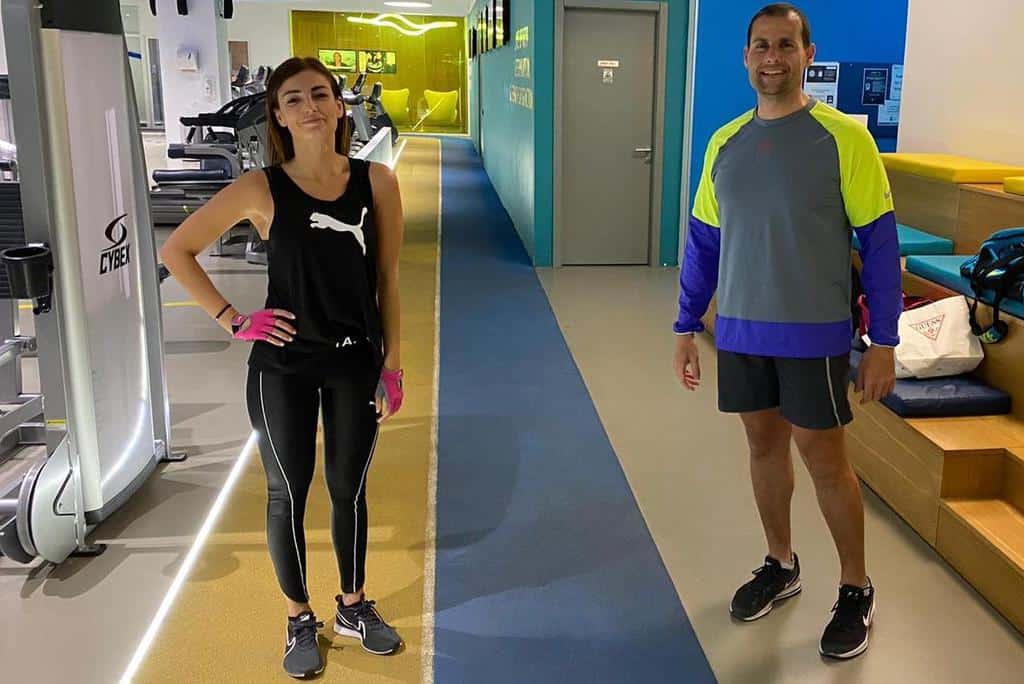 It is noble of the prime minister not to want to imprison us all. He said that when he was justifying his decision to stand back and watch the virus spread in our midst without as much as insisting we stay 2 metres apart.

You get the gnawing feeling Robert Abela held back on any anti-covid measures because he feared his own imprisonment. He had a new boat berthed in Ragusa and his body twitched violently at the memory of the weeks he didn’t feed his addiction to the gym during the March to May lockdown. He wasn’t going to go there again.

It seems then that the ‘balance’ that is being sought is not between health and the economy, but between healthcare and the collective illusion that nothing is amiss. 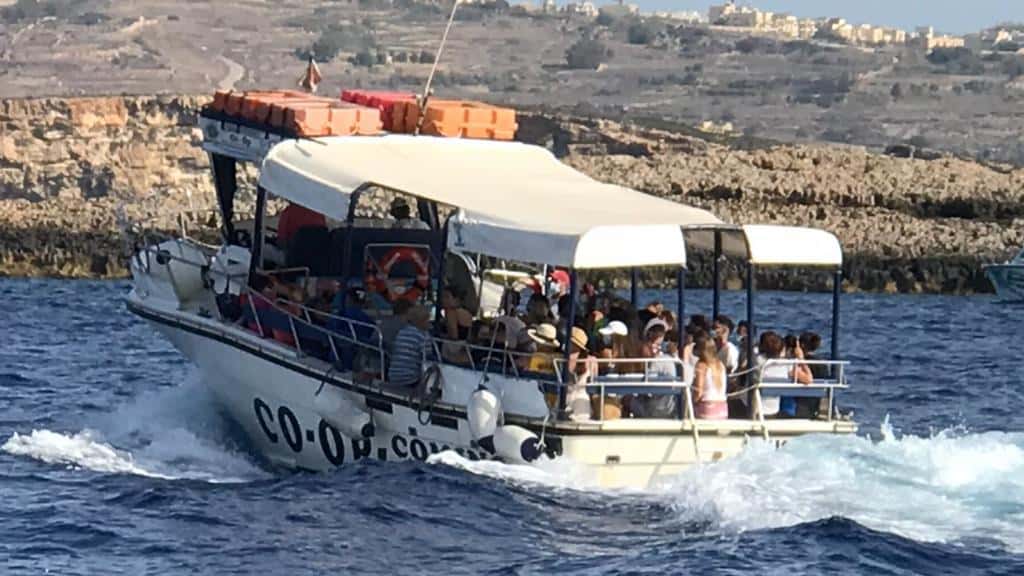 Numbers of covid-infected are shooting up. Blaming the number on tests, like that genius Michael Zammit Tabona is doing, is short-sighted and stupid. The rate of testing has at most trebled since we stopped registering new cases of infection. The rate of positive results has increased by a factor of 50 or more.

Of course, if we stopped testing, as Michael Zammit Tabona is urging us to do, we would have no positive cases in our statistics. People die anyway. We’ll stop feeling guilty we could have avoided causing their death if we don’t know it’s the coronavirus. 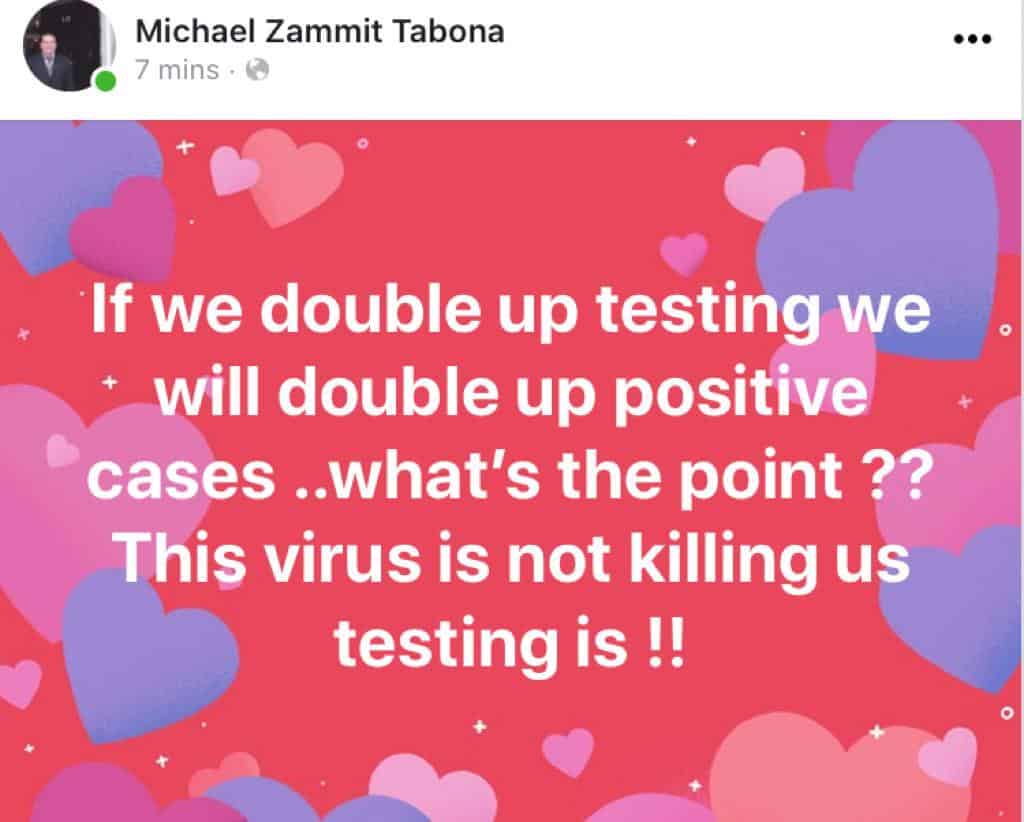 What stupendous, money-grabbing, puerile logic this is. Michael Zammit Tabona wants to keep cramming them on boats 40 to a square metre, not 4. He’s confident none of his party-going passengers are going to die on his hands and his staff and crew are fairly tough too. Of course, there are no guarantees. People of all ages have fallen gravely ill or died as a result of the virus but let’s park that in the pending tray of ‘too rare to be bothered with’.

All those people have relatives. Some are frail and old and living alone. Some are fighting cancer and undergoing chemo therapy. Some are asthmatic. Some have vulnerabilities they are barely even aware of.

Thousands of people are out this month enjoying their summer. But many are locked inside because for them infection is a very dangerous risk. Are the healthy to blame for the fate of the sick? Not necessarily. But the healthy have the responsibility to help the sick make the most of their lives. It’s what belonging to a sentient species is about.

When one of us falls while being chased, we don’t keep running. We stop to help them up and run away together at the best pace the slowest can muster. It’s been like that since the Neanderthals.

Robert Abela’s enthusiasm for sunbathing, spinning and boating has pushed further and further away the day, the homebound vulnerable had been hoping for. They don’t ask for much. They’re certainly not asking for weekly boat trips to Marina di Ragusa. They’re just asking for the ability to sit by the sea, have a walk on the promenade, watch a play at the theatre, or go out for movie night without fear of an infection that could kill them.

When the daily infection rates shrunk to a handful, they thought they could start looking forward to a day beyond the shrinking confines of their homes. During the lockdown we stayed inside just so that day would come. Our children missed class, people lost chunks of their income, we gave up our lives out of doors so that vulnerable people could live without the imminent threat of infection.

We have now changed policy and we have learnt to stop worrying and love the virus. We’re living with it, happily giving it to each other like homemade jam in Christmas bags. We wear masks like fashion items but take them off to air kiss like New England cheerleaders. Our fears are washed away by the hubristic soap of immortality.

In the process we have consigned a large contingent of our population to immurement while they pace the green mile inside their homes hoping the uncaring won’t make things worse for them.

Some say the government lost control of the coronavirus because they are incompetent and inept. This, to me, is obviously untrue. The government was perfectly capable of fighting the virus first time round. Hell, we were all more than a little impressed at how well they did it.

The fact they’re letting the virus run wild now is not a product of incompetence. It’s a product of callous indifference. It is a result of a pathological lack of solidarity and sympathy. Forcing the vulnerable to stay indoors indefinitely while we dance around with death on their doorstep is not some rookie mistake. It is the crushing egoism of the vain, the selfishness of the immature, the chutzpah of people who think they’ll never get old, never be ill, will never need others to think of them and their needs.

A year ago, we said that corruption was the product of a fragmented society, of the breakdown of the common good, of a lack of a sense of duty to the community, of the dissolution of values. The way we are choosing not to manage covid is an identical outcome. Who cares about the weakest among us? We’re partying on the beach and let those dead men walking fend for themselves.