It is said that Marie Antoinette never uttered these words but they were attributed to her by her enemies who were sick of her lavish lifestyle while the peasants of the city were trying to eke out a living in the sewers of Paris.

Around lunch time on a hot, somewhat lowkey Santa Marija, the simpering faces of Michelle and Joseph Muscat, clutching their flutes of champagne in one of the playgrounds of the parvenues of Europe was posted on Instagram, by the Queen of Chavs and Arrivistes herself, Michelle Muscat, urging us to #staysafe #staypositive. 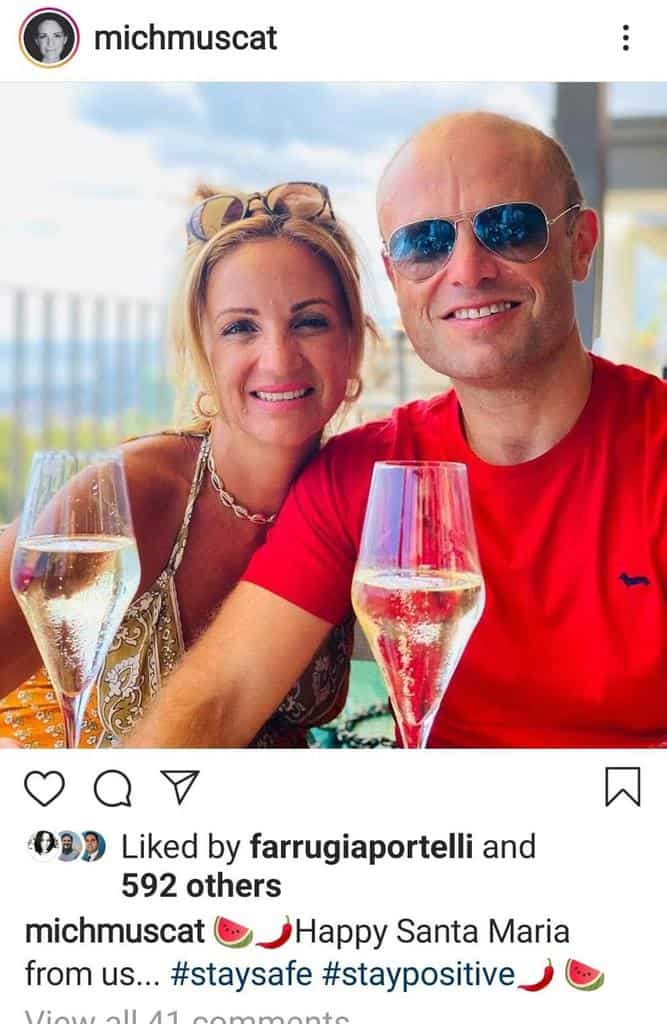 On the day we had a record of Covid-19 cases – 72 – no doubt also as a result of her husband’s advice to the prime minister Robert Abela from his Office of Joseph Muscat in Burmarrad.

It was never going to be a bumper summer season. We all knew that Covid would have put paid to that. But with our exemplary handling of the pandemic we hoped for the slimmest of recoveries in our economy, as usual driven by our number one industry: tourism.

That has now been decimated. It is very significant that the highest number of cases has been registered on what is considered to be the height of summer.

Joseph Muscat is not the only culprit here.

How about our immature Prime Minister Robert Abela? You all know by now what I think of him for sabotaging Malta’s Covid contingency plans nearly from the beginning with his claims of “waves are only found in the sea” and the sanctioning of mass events. My open letter to him published recently spoke for many or so I was told.

Where is our hapless and totally inept Tourism Minister Julia Farrugia Portelli who went on the BBC babbling about ‘machanisms’, ‘tamperature’ and ‘hypotech’ situations and the sanctioning of mass events? She’s incommunicado.

Just look at what happened now. It’s not as if the doctors didn’t warn us about the outcome of your collective recklessness.

The contagion is out of control.

Responsible governments across the world took notice and one by one put Malta on the red travel list. Some of them banned us outright. Who can blame them? That’s how conscientious leaders are expected to behave.

Where are Robert Abela, Julia Farrugia Portelli and Tony Zahra?

Our puppet prime minister is in Sicily going to spin classes (there’s a joke in there somewhere but I am not in the mood for comedy). A decent one would have returned by now or not gone on his jaunts in the first place.

Farrugia Portelli is not answering questions sent by the press but she sure has found the time to like the photo of the Muscats on Instagram. Who knows what goes through her head nowadays? Nothing except thoughts of self-preservation, I expect. But as what? Surely not as minister for tourism because soon enough there won’t be any tourism left. Maybe as a newly created ministry for elocution?

And lastly Zahra arrogantly directs the questions from the press to the CEO of the MHRA. Tony Zahra, put on your big boy pants and shoulder your responsibility in this fiasco.

Who will be left holding the can? Certainly not these untouchables.

Robert Abela must be scrambling to find another scapegoat (after accusing the migrants and the doctors for his gross irresponsibility) all the while living the high life in Sicily. Julia Farrugia Portelli won’t resign because it’s not in our culture to shoulder responsibility ever. And Tony Zahra will still enjoy his spoils after decades exploiting Malta for his enrichment.

The people who will be left holding the can are those who have worked hard and invested everything to build their family-run businesses, the employees who will see their earnings dry up with no visible means of support, and ultimately all of us.

Don’t shrug your shoulders thinking that this won’t impact you because you have nothing to do with the tourism industry. Tourism is the engine that keeps our economy well-oiled. It’s the industry that feeds our services, our healthcare, our education. You name it, it’s there.

Now this mechanism is jammed.  And the ones responsible don’t give a damn.

Expect them to blame us all for our negativity. Yes, because the only thing positive about this situation is the results announced daily.

As for the peasants in the sewers of Paris, they found their pitchforks and stormed Bastille.