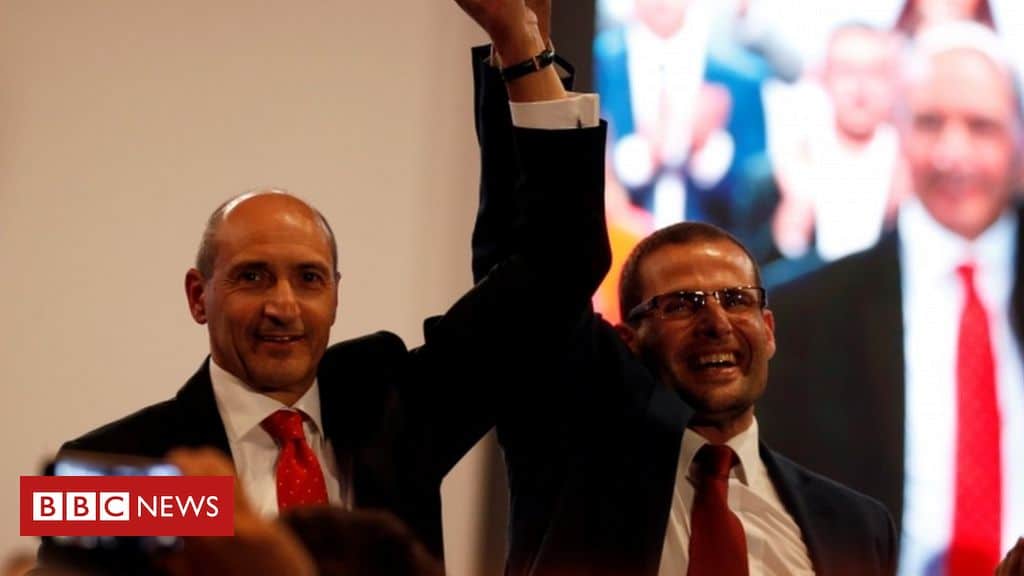 Robert Abela says children must go to school. He speaks to us as if anyone of us bring up children wouldn’t want them to. He reminds us because, presumably we needed reminding that, it’s important that children miss no more schooling. And it’s important that a way is found to balance the desire of ensuring our children’s education with the need to secure their health and the health of everyone that comes in touch with them.

Robert Abela wanted to reassure us today and said protocols are being written by the Health Department for schools. That’s bad on so many levels.

First point. Protocols for schools are being written now? In August? Children have been out of school since March. Has no one had time to think about this rather pressing topic in all this time?

Is it not a bit silly that schools have not yet been told how they are to conduct their business when they are expected to reopen? Tens of thousands of people are impacted by this. Are teachers to prepare more online material? Are parents to set their children up for education at home? Are uniforms to be purchased at all? Will classrooms need physical modifications? Will course work need to change, particularly sports, lab-work, practical work, exams, art-room practice, drama class, field-work and so on? Are capacity limits for school buses changing? Will more buses be needed? Will there be swabbing in schools?

Schools and parents needed this information weeks ago in order to be ready for the re-opening of term. They don’t have it yet and Robert Abela is feigning shock and horror that people express concern.  It’s not just the health authorities that are needed to write these protocols. A school is a far more complex operation than a barber. Designing these changes, implementing and enforcing them is a massive administrative and teaching burden that the government cannot just dump on schools on the eve of their re-opening.

It is not reassuring to see Owen Bonnici on top of this. Here he is proudly posting that he’s been reassuring student representatives that everything is hunky-dory. 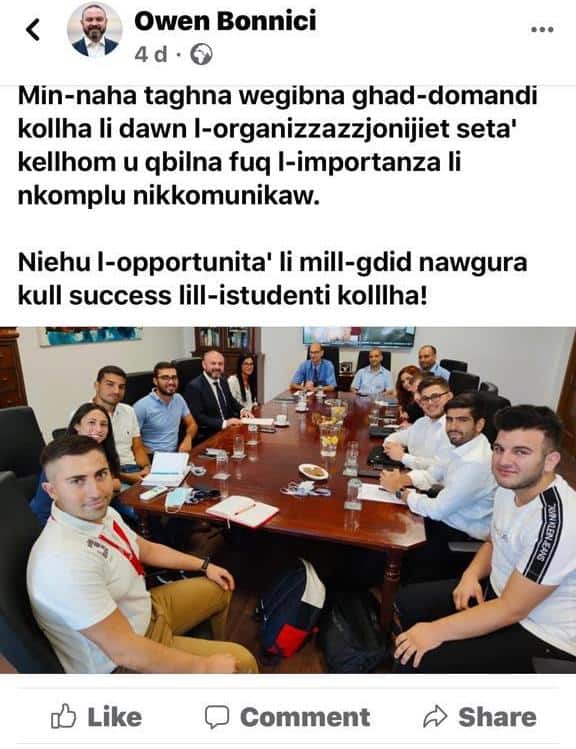 But looking at the picture, you realise Owen Bonnici doesn’t know the first thing. His visitors are hunched up in a room a fraction of the size required for 15 people. If they were in a restaurant the restaurant would be closed down. It’s not just that they’re more than 10. They come from different households, they’re within smelling distance of each other and none of them is wearing a mask. If the protocols they are writing for schools are anything like the protocols that governed this meeting, the disaster to our education has not started yet.

And Owen Bonnici’s post is completely uninformative. He said he answered all the students’ questions and yet whatever it is he told them does not seem to be written anywhere. MCAST students will be setting for the University-entry exams starting 29 August and they still don’t know where the exams are taking place, if the halls are air-conditioned and what has been done about social distancing and sanitisation. Their pleas and protests have been ignored so far.

Robert Abela’s argument that most people infected with Covid did not need hospitalisation is facetious. These MCAST students are worried about their grand-parents and their vulnerable relatives who have had to go into self-isolation again because of the government’s rash policies.

We will take the the medical views of experts on Covid-19, prime minister, thank you very much. They tell us the rate of contagion here in Malta is higher than almost all our European neighbours. And that’s before school started.

“As of Sunday, France has a rate of 26 per 100,000, Poland is 23 and Switzerland 25. Yesterday Malta hit 58.6 cases per 100,000 and Holland 32.5, the Daily Mail reports. The rates have been rising steadily over the last week, according to data from the European Centre for Disease Prevention and Control.”

But what we get here is spin. For viewers of One TV anyone who is raising the alarm about our alarming rate of contagion is branded a liar. This report aggregates data on contagion since the infection spread in 2019. Spread out like that Malta’s rates are lower than the rates of some other countries. There are many people whose sole source of information is One TV. They are being given wrongful medical advice, they’re being told to throw caution to the wind, they are being armed as carriers of this disease.

And as this One TV blogger puts it, if you dare question the government’s line that there is no Covid crisis, that must be because you’re a bad person with poison on your tongue. Is it not spectacular that being concerned about rates of contagion that are higher than the rates that forced us in lockdown inside our houses for almost two months has now become a ‘poisonous’ and seditious act?

It’s clear this is not the result of the government’s education policy. Eleven young Sicilians who have been put in quarantine after testing positive this week were not in Malta for their education. They were here clubbing, picking up and spreading around the virus while our entertainment operators rang their cash registers.

A cluster of 11 infected young people in Sicily are not received with the flippant indifference of the Robert Abela type, who says it won’t matter because most people don’t die of it anyway. It is received as a news-worthy disaster that has made it to La Repubblica and reinforces the description of Malta as a “problem country”. If you’re not going to Malta to launder the mafia’s money, you’re going there to smuggle a deadly virus out.

Look at this picture taken this morning. 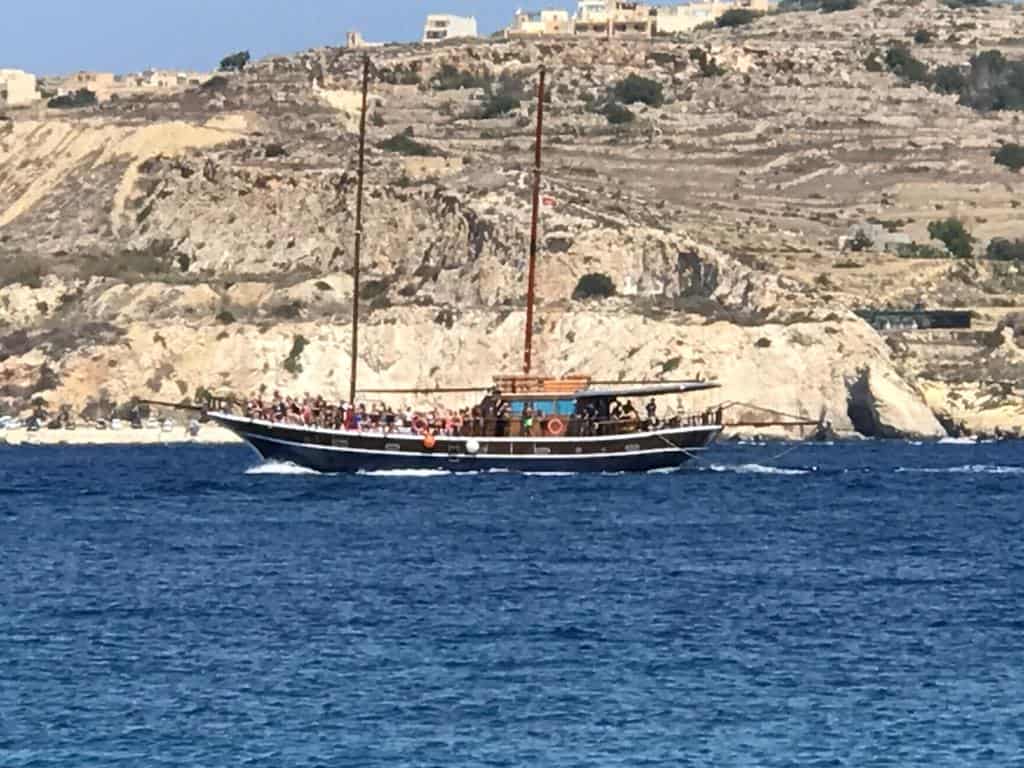 Are the operators of this boat trip regulated by any protocol? Is the protocol anything like what is being written for our schools? Are these people being asked to wear masks, stay 2 metres apart and occupy a 4-metre square space per individuals? Perhaps but is anyone doing something about the fact that these protocols are generally ignored?

We fall to the nation’s indigenous and endemic diseases: greed and impunity. We get busy writing laws no one will enforce while the few make money. And to hell with the weak and vulnerable.

And to hell with our children’s education. After all, if we didn’t get so desperate to re-open our night-clubs, to drink to wooden idols and to behave as if no disease can ever get to us, our schools would be re-opening without much question this September.

Robert Abela is right on one thing. Our children’s education is going to suffer catastrophically. The government needs to be held to account for this disaster.