This is not a “reply” to One TV. I’m always bored by people conducting their personal crusades and speaking on their own behalf about nothing but themselves. I would hate to bore myself.

But this is a commentary about their conduct.

I have for some time been a critic of the prison administration led by Alexander Dalli. There have been too many deaths in prison under his command and none of them have been properly explained. His publicity mania would be funny if he wasn’t being trusted with the lives of some very vulnerable people. Vulnerability does not come to mind when you think of convicted felons. But people whose liberty is denied, whose access to help is restricted and who must logically submit to someone else’s monopoly on violence, are indeed vulnerable.

I have also expressed concern about reports of gross overcrowding in prison. These were were particularly dramatic when a large number of residents of the Ħal Far tent village were imprisoned en masse. We heard reports of degrading treatment upon admission and no reports that that treatment improved with time.

I repeatedly asked the government and the detention authorities to allow me to visit the prisons and detention centres to report on conditions there. All requests were denied. A judicial protest I filed in court before covid hit was treated with the greatest contempt imaginable, it was ignored.

I’m not interested in every news story out there and I don’t expect every journalist to be interested in this story. But I know I’m not alone in asking to be allowed to visit the prisons.

This week I reacted to a post by social media influencer Terry Muscat, who calls herself Terry ta’ Bormla or Zija TT.

For some reason that has never been fully explained Alexander Dalli invited Terry Muscat to tour the prison and report on her visit. This tour was projected as an exercise in transparency by the prison. At the risk of again attracting the inevitable criticism of elitism, snobbery, even transphobia, it is clear to me that Alexander Dalli’s choice of a guest for an outsider’s inspection of his prison is intended to trivialise the need for transparency and to make a mockery of journalism.

Terry Muscat herself, her family and friends were insulted by this argument and I can’t pretend I do not see why. Not only Terry Muscat but also her many viewers consider what she does on Facebook as useful and important. It doesn’t matter what I think about it. And it doesn’t matter if she seems to think I somehow envy the privilege of Alexander Dalli’s invitation. She does what she does and I do what I do.

The fact remains that demanding access to prison and detention centres for journalists covering human and civil rights issues in the context of consistent reports of failures in this regard, is legitimate. And acceding to these demands is a democratic obligation for the government.

One TV “journalists” are not going to see it that way. Instead they reported my commentary on the subject as “an attack” on Terry Muscat. They said I picked on her because she supports Adrian Delia and I’m supposed to belong to “Simon Busuttil’s faction that is working for Bernard Grech”.

They’re entitled to their analysis, however warped and baseless. Telling their viewers that they believe I am motivated by dislike of Adrian Delia is factually wrong but, I suppose, as gutter journalism goes not quite beyond the pale.

But to say I “attacked” Terry Muscat or that I “ridiculed” prison wardens is factually wrong and they know it because they’ve read the piece. I criticised Alex Dalli, in this piece for inviting Terry Muscat for a prison tour while continuing to ignore press requests for just the same thing. If you want to be dramatic and call it an “attack”, indulge yourself. But no one else was being criticised, or attacked.

I did include in my report the fact that in the past, Terry Muscat served time in prison on a drug conviction. My assessment at the time was that this simple fact which I reported without comment was relevant for readers to understand the significance of Alexander Dalli’s invitation to her. I thought it might be seen as relevant. Terry Muscat and her family and friends saw this as an outrage because referring to the fact, suggested it made her ineligible for this prison visit.

I accept the post would have been just as informative without reference to her past conviction.

But that’s not even what One TV thought amounted to an “attack” on Terry Muscat because they reported her prison time with even greater prominence. That’s because they seem to be under the mistaken impression that she served time while Alexander Dalli was prison warder and her “positive” experience on the inside was thanks to him. He wasn’t. It wasn’t.

Also, in saying I was motivated in my post by my dislike for Adrian Delia, One TV judge me by their own measure. When Terry Muscat was sentenced to prison, One TV reported the fact prominently, far more than any equivalent conviction. And they showed as many photos as they could find of Terry Muscat with Simon Busuttil to decorate their reporting with. They did so because they perceived her as a supporter of Simon Busuttil. Their reporting of her conviction was coloured by their perception that it would hurt Simon Busuttil and they made sure most damage was inflicted by their reporting. 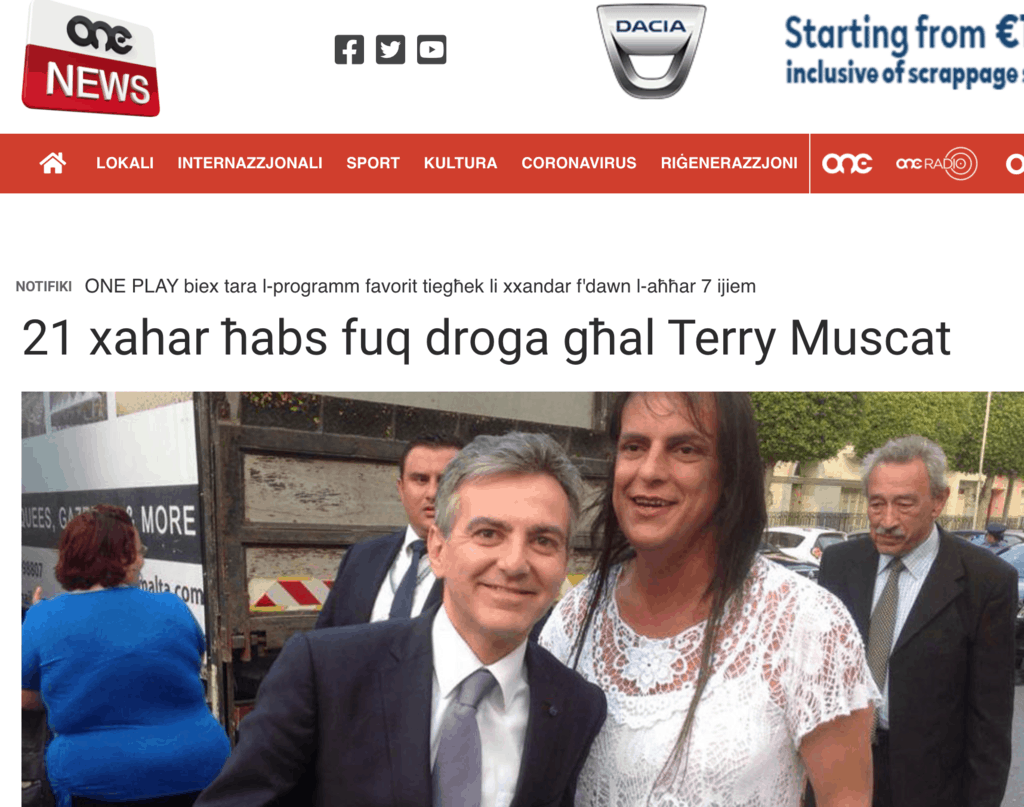 In simple words then I did not “attack” Terry Muscat. And I did not refer to her in my reporting on this prison visit story because I wanted to “attack” Adrian Delia. But One TV did attack her in order to attack Simon Busuttil.

This sounds disturbingly like a diatribe in my own defence, which I started out by saying it would not be.

What this is about is the danger of One TV continuing to pretend it provides an information and journalism service.

Any journalist who is not interested in the story on prison conditions would still not have undermined in this way the efforts of a colleague who is being blocked from the truth by government action. A journalist working at 103, at Times of Malta, even at a stretch at l-orizzont or TVM, will understand what is happening here intuitively.

Imagine how a court reporter would feel if a judge ordered that no journalists are allowed to follow proceedings except Terry Muscat or for that matter Ben Camille or Madeliene Baldacchino or Adrian Zammit. (I had to look some of those up too).

One of Terry Muscat’s friends posted on Facebook saying I fancied myself as a “noble”, some form of blue-blooded aristocrat who thinks they’re better than iz-Zija TT and should therefore have been “invited to prison” instead of a commoner. That’s the sort of reaction One TV wanted to provoke. They make the journalist the enemy, by mischaracterising them as elitist and belonging to a privileged class in perpetual need of being put in their place.

One TV understands this but it is not on the side of journalism or free media or even democracy. They’re on the side of the regime that has its reasons, whatever they are, to keep Alexander Dalli as prison chief.

And they will happily lie in the service of that political objective.

Yesterday, the Labour Party that owns One TV twisted statistics to give its viewers the impression that Malta’s covid situation was the best and the safest in Europe.

That lie serves the political interest of the Labour Party. But it’s a disservice to the public that will continue to behave as if covid was harmless and spread the infection further.

It is not just the lives of prisoners that One TV and other useful idiots are putting in danger here.

Previous:A planning permit for the Golgotha
Next:The only emotion he could express