Stealing from the poor

Labour troll Georgina Cardona is causing a stir on Facebook saying that Repubblika is on the list of beneficiaries of funds from the Community Chest Fund and l-Istrina. She publishes some sort of list Repubblika is part of but the document, whatever it is, is clearly not a list of CCF/Istrina beneficiaries. 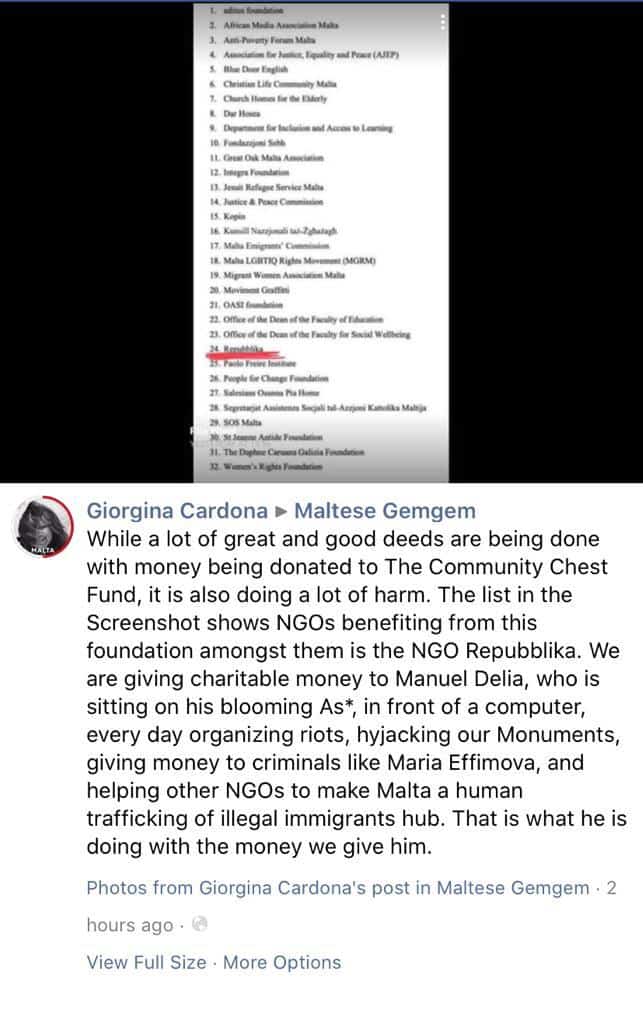 This is a complete fabrication from Labour HQ that are using one of their more aggressive aliases to foment hate. It exploits racism of course because Repubblika has dared place itself against the current black-baiting, foreign-lynching trend.

Repubblika has never asked, never been offered, never received a penny from the Community Chest Fund and l-Istrina. Of course.

Georgina Cardona then went on to say that I, Manuel Delia, even though not on her list of whatever it is her list is made of, am being paid by the Community Chest Fund.

“We are giving charitable money to Manuel Delia, who is sitting on his blooming As*, in front of a computer, every day organizing riots, hyjacking our Monuments, giving money to criminals like Maria Effimova, and helping other NGOs to make Malta a human trafficking of illegal immigrants hub. That is what he is doing with the money we give him.” (sic, sic, sic).

We? Who’s we? My list of contributors is not long. Is Georgina Cardona an alias for a schizophrenic supporter of my blog? I don’t think so.

The context of her comment is that she gives money to the Community Chest Fund and I get some of it. I don’t. I never asked, and never even imagined I should.

I criticise the government for relying on charities to provide essential services that are rightly a duty that belongs to the state. The poor, the sick, the forgotten and the desperate should not have to wait for the magnanimous generosity of a charity organisation.

But that’s not a criticism of the charity organisation. It’s a criticism of any government that has not provided for a sufficient welfare framework to ensure no one is left behind.

But right now I’m saddened by all the unkind comments that Georgina Cardona is getting from people saying they will withhold their charity and donations to the community chest fund because of a complete fabrication about me and my admittedly corpulent As* (sic) getting a share of that charity.

For pity’s sake, stop lying. It doesn’t help if you do your Facebook lying standing up, instead of sitting on your lean arse. I’ll indulge in a little speculation. Might you be getting a full-time government salary while you write this crap?

Previous:If Simon Mercieca is speaking for the mafia, he would be a mafioso*
Next:Corrupt minds