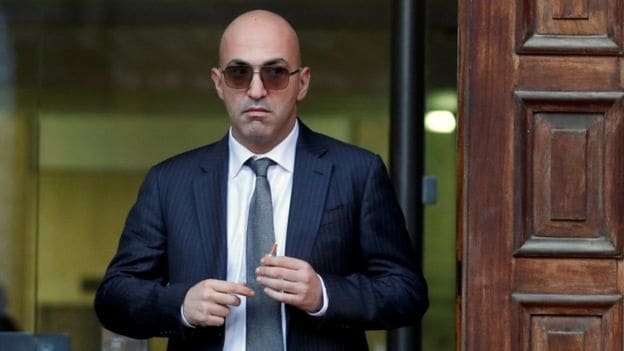 Jason Azzopardi was wondering why he was being taunted by the likes of Simon Mercieca with a tu quoque about his supposed relations with Yorgen Fenech. He didn’t know the guy. Never met him. And has been busy these past three years risking life and limb to get him to serve the longest prison term possible for killing Daphne Caruana Galizia. Why were Adrian Delia’s friends saying he was Yorgen Fenech’s buddy?

They pushed him to the point of swearing in a Facebook comment (“naħlef”) never to have met him.

Yorgen Fenech’s proud mummy enters stage left. She had been following the debate in silence and came out to produce a photo from when Jason Azzopardi had a different job, different spectacles, even a different wife where he appears to be looking at Yorgen Fenech’s general direction.

He’s standing, holding a glass of something in his hand which makes this a social occasion. From carbon dating his old spectacles, Jason Azzopardi figures the photo is from around 2003. Definitely, no later than 2008 by when he had ditched the specs.

At the time, Yorgen Fenech was in his early twenties, one of a dozen or so third-generation Fenechs holding the brief case for their parents and made to learn the ropes of the business doing middle management jobs in the hotels, the car showrooms and the casinos.

In other words, an anonymous anybody that a politician has had to shake hands with at a social event that doesn’t even belong to his constituency where the politician does not even have to bother making the effort of committing the face to memory.

Jason Azzopardi failed a memory mnemonic test yesterday which is awkward given that he has been working so hard and so visibly at making the mafia boss pay for a crime that he has committed long after that brief encounter so many years ago.

For its awkwardness, the story would have been fair game for a UK tabloid. But it would stop at the awkwardness. What this is being used for now, is something else altogether.

Consider where this is coming from. It started with innuendo from that fascist, Adrian Delia-campaigner, Simon Mercieca. There’s nothing to suggest Simon Mercieca was at the same pre-2008 cocktail party attended by Jason Azzopardi and a twenty-something Yorgen Fenech. So how did he know to ask the question on whether it was true that Jason Azzopardi knew Yorgen Fenech?

But we can guess at Simon Mercieca’s motives. We can surmise two. It’s up to you to decide if it’s a case of either/or, or both being true.

One reason he could have done this was to undermine the case against Yorgen Fenech. He wanted to undermine the credibility of the victim’s family lawyer and reduce the effectiveness of his contribution to bring a mafioso to justice. That makes Simon Mercieca a mafioso himself.

The other, admittedly more obvious reason, is that Simon Mercieca wanted to undermine Jason Azzopardi’s credibility because that helps Adrian Delia. We can see that Adrian Delia finds it impossible to deny exchanging WhatsApp messages with Yorgen Fenech since Yorgen Fenech was outed as the 17 Black owner who bribes Keith Schembri and Konrad Mizzi. The devastating impact of that, they believe, can be diluted with the idea that even Jason Azzopardi was ‘friendly’ with Yorgen Fenech. A pre-2008 photo at a party ‘proves’ that.

Consider this Facebook post of the other fascist Adrian Delia campaigner, Frank Portelli. He speaks of how he knew Yorgen Fenech because when his father George needed a kidney, Yorgen showed such love for his father that he gave up one of his own.

Isn’t that touching? Frank Portelli wants us to think what a good man Yorgen Fenech is for he so loved his father that he gave him an organ. Yes, the mafia are big on the family thing.

Frank Portelli is a fascist mafioso for his assessment of the character of Yorgen Fenech does not go as far as evaluating his behaviour with people outside the family. Yorgen Fenech saved his father and killed someone else’s mother. Such a sweet boy.

So, look at it. Simon Mercieca starts it. Yorgen Fenech’s mother (that’s Yorgen Fenech himself) gives it life. Frank Portelli plays with it some more. Then Labour’s One TV has a field day leading a chorus of trolls accusing Jason Azzopardi of ‘lying’. This slip up about his social calendar from 12 years ago is meant to replace the work he’s doing in court every week challenging criminals we know are perfectly capable of murder, exposing them and dragging them kicking and screaming towards a lifetime in prison.

Who benefits from this? In the short-term, Adrian Delia who is not merely silent in the face of all that is going on. He is the other side of the pincer move against Jason Azzopardi with a court protest filed against his own MP and shadow minister.

But go one layer deeper. Who really benefits from all this? The Labour Party. They benefit from the undermining of Jason Azzopardi’s credibility, because that could keep Adrian Delia at the helm of the PN and them in a perpetual lease on government.

The mafia want Jason Azzopardi out.

The mafia want Adrian Delia to stay on top of the PN. The photo proves it.

Legal note: for all it’s worth, Yorgen Fenech denies killing anyone or any wrongdoing for that matter. Assume Simon Mercieca and Frank Portelli will be appropriately indignant for being described as fascist mafiosi.